Boomerangs are traditional Australian Aboriginal Cultural objects which are sold as souvenirs to tourists. So too are bullroarers and didgeridoos.

According to Justice Perry, they must be made in Australia. Otherwise, souvenir sellers may face prosecution for selling fakes. And if the label says ‘hand painted’, then an Aboriginal person must have done or supervised the painting.

The Court found that these objects and their labels conveyed the overwhelming impression to the buying public that the objects were made in Australia and were hand painted by an Australian Aboriginal.

In fact, the objects were made in Indonesia, and no Australian Aboriginal person was involved in their manufacture. The objects had no country of origin label. Even if they had, it is unlikely to have altered the impression.

What impression did the boomerangs and other objects convey to the public?

The boomerang and its labelling conveyed the impression of a connection with Aboriginal Australian culture and of authenticity and provenance of having been made in Australia: 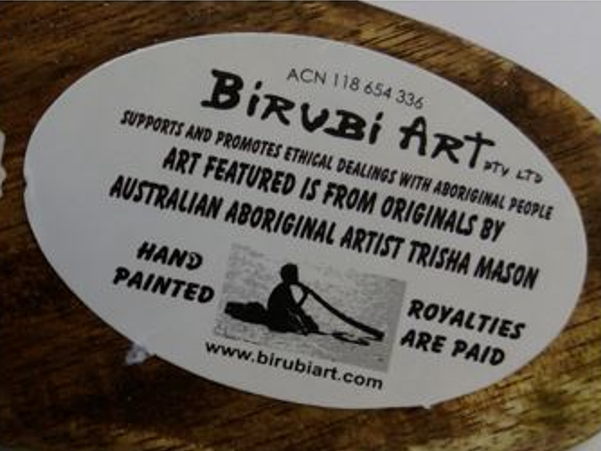 The boomerang, plaque on the stand, labelling and packaging conveyed the same impression as the loose boomerangs. In addition: 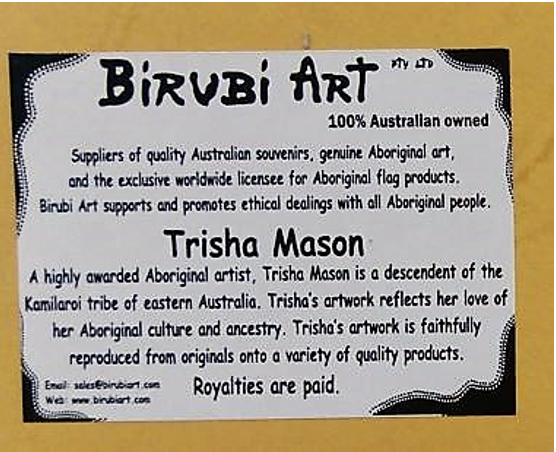 The Bullroarers (in a box)

The bullroarer, labelling and packaging conveyed the same impression as the boxed boomerangs. In addition, the Australian Aboriginal artist Trisha Mason is identified as the artist whose designs are used for the bullroarer, and to whom royalties are paid.

The bamboo didgeridoo souvenir and its labelling conveyed the same impression as the loose boomerangs. In addition: 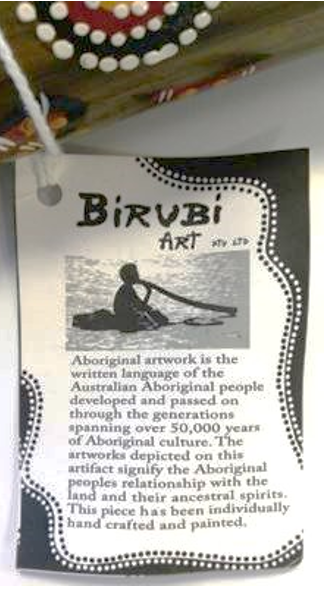 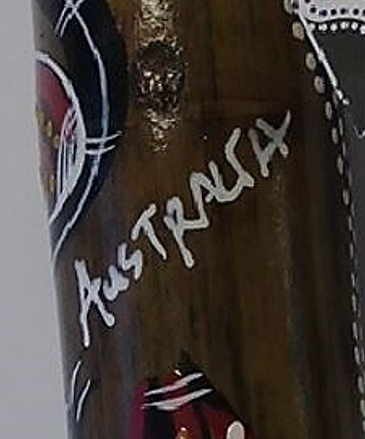 The message stones are not as recognisable Australian Aboriginal Cultural objects, did not convey the same impression, and the label simply states: “ABORIGINAL ART” and “HAND PAINTED”.

The breaches of the Australian Consumer Law

The Court found these representations were conveyed: made in Australia and hand painted by an Australian Aboriginal. They were not expressly stated, they were implied by impression from images and words on the objects, the labelling and packaging.

The Court found that the overwhelming impression given to the reasonable purchaser at a souvenir outlet by the objects was:

a connection with Aboriginal Australian culture and an impression of authenticity and provenance such that there is a real, and not remote, risk that a member of the class acting reasonably would be misled into thinking that the loose boomerang was made in Australia and was hand painted by an Australian Aboriginal person. [paragraph 115]

The Court found it reasonable that a purchaser would rely on the impression, and not closely examine what was stated on the label and make further enquiries:

in the context of a low cost item such as the loose boomerang which would typically be purchased as a momento, souvenir or small gift, I consider that it is perfectly reasonable for a member of the class of potential purchasers to rely upon the dominant message implicitly conveyed by the Product and its labelling. [paragraph 117]

For these reasons, purchasers would be ‘likely’ and indeed ‘liable’ to being misled that:

In reaching its decision, the Court dismissed these arguments by Birubi Art:

prospective purchasers, whether international or Australian, would be attracted to the loose boomerangs precisely because they recognise the cultural association between the object, and the art, designs and symbols used, on the one hand, and Australian Aboriginal people and culture, on the other hand, [paragraph 116]

and were liable to be misled because of that familiarity.

Commercially, most souvenirs sold in Australia are sourced from overseas (primarily Asia) because they are cheaper to make than in Australia.

If not made in Australia, they are fake Aboriginal artefacts, and suppliers and sellers may be liable to prosecution for false and misleading representations under the Australian Consumer Law.

The proceedings will now return to Court for orders to be made. These orders normally include an injunction, civil penalties, a disclosure order, a compliance program and a legal costs order.

However, the further orders may be academic because a few days after the decision was handed down, a liquidator was appointed to Birubi Art Pty Ltd (In Liquidation) by its shareholders. This means that it will cease to carry on business.

Whether the ACCC seeks orders against Mr Wooster, the sole director, remains to be seen.

Tourism represented 3.2% of Australia's GDP in the financial year 2016/17, contributing A$47.5 billion to the national economy. There were 8.8 million tourist arrivals in 2017. Previous research suggests that expenditure on shopping comprises almost a third of the total travel spend.

Purchasing souvenirs is an essential part of the travel and shopping experience for international visitors and tourists. Souvenir purchases allow the visitor to ‘capture the travel experience’ and take it home with them to make the experience tangible; share the experience with others; and remind themselves of the experience long after they have returned home.

Unlike stuffed koalas and kangaroos, or fridge magnets depicting the opera house, it is entirely reasonable for a visiting tourist to expect that cultural artefacts displayed for sale as ‘hand painted by Australian Aboriginal persons’, to be genuine. It would mislead the tourist and devalue their experience if the boomerang, bullroarer or didgeridoo was made in Indonesia, but sold as Australian made. The ACCC is right to pursue this.

Given the enormous financial contribution that tourism makes to the Australian economy, and the emotional investment and connection that visiting tourists are likely to make when purchasing a souvenir that is presented as ‘authentic’, it is essential that vendors make honest representations about the products they are selling, and in this case, source Aboriginal cultural artefacts from Aboriginal persons.