Despite the inherent volatility of the sector, real estate transactions have experienced dramatic growth over recent years fuelled by an increasingly diverse range of international investors with huge amounts of capital to deploy.

On the face of it, few sectors would seem more vulnerable to the perils of boom and bust than real estate and, traditionally, it has been safe to assume that property transactions would rise and fall radically with the economic cycle.

The prevailing political and economic uncertainty and fears of slowing global growth are beginning to impact levels of real estate M&A activity, and certain sectors, such as retail, are suffering and showing signs of distress. However, the fundamentals remain strong; debt remains cheap; loan-to-value (LTV) coverage is within sensible limits; and the levels of “dry powder” available to international investors, in particular to U.S. real estate private equity funds and Asian investors, remain at all-time highs. While we anticipate that there may be a moderation of activity in some markets, activity in favoured asset classes, particularly those with an income operational focus, is likely to continue into 2020.

Property transactions have followed a path of relatively stable and sustained growth in the years since the financial crisis. Growth in investment has accelerated in the last two years as an increasingly diverse range of well resourced international investors have allocated more of their capital to real estate transactions across the world. In 2018, USD1.8tn was invested in global real estate– the most active year ever.

What was once a predominantly domestic market has become increasingly international in recent years. We are continuing to see activity in the most developed markets such as the UK, the U.S. and parts of Europe (albeit cross-border capital flows slowed in the first half of 2019), but global investors are also looking to newer markets for opportunities, for instance Eastern Europe and Asia. In Europe, Poland is seeing continued growth following its reclassification to “developed market” status. This, combined with higher yields and therefore a better return on investment than mature real estate markets such as France and Germany, has resulted in new investors entering the market. China is also attracting growing amounts of inbound investment and has overtaken Australia as the prime target for international funds in the Asia Pacific region.

At the same time, Asian investors are looking for opportunities in Europe and beyond. Although Chinese investors, the vanguard of this activity throughout 2015, 2016 and the first half of 2017, have been deterred by strict capital controls imposed on speculative investments in property and entertainment assets, they have often been quickly replaced by other Asian investors, notably from Korea and Singapore. 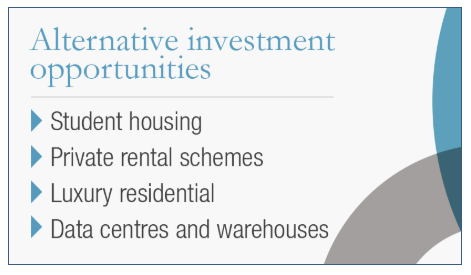 The main factor driving activity on an international scale remains the sheer volume of capital raised by investors in recent funding rounds and the continuing availability of affordable debt financing for transactions in buoyant parts of the real estate market from both the banks and alternative lenders. In particular, PE funds have built up huge amounts of dry powder for both their equity and debt real estate strategies and are increasingly widening their search for targets that can deliver attractive returns in the relative short term.

However, new entrants, including sovereign wealth funds, pension funds and insurers, are also favouring real estate over other asset classes and, with lower costs of capital, are finding plenty of opportunities that meet their demand for stable returns over a longer investment timescale.

Another feature of the growing internationalisation of transactions in the sector is the proliferation of multi-jurisdictional deals, with investors looking to deploy huge amounts of capital in one go, aiming to achieve scale at speed and obtain a diversified portfolio to hedge themselves against variations in local market conditions.

For example, we’ve seen a sharp rise in pan-European transactions in recent years, particularly in the logistics space. The EUR12bn sale of Blackstone’s logistics platform, Logicor, to the China Investment Corporation, and Brookfield’s USD2.8bn sale of its Gazeley warehousing operation to the Singapore-based GLP fund, both involved assets spread widely across Europe. Another recent pan-European acquisition by Blackstone saw the fund buy Canadian REIT Dream Global whose assets include over 200 office and warehouse properties in over 100 cities across Western Europe.

Regional markets are inevitably subject to different short-term dynamics, each at varying stages of maturity and development. We are seeing significant disparities within Europe for instance.

Deal activity in Germany has become increasingly hectic after a relatively slow start to the year with a number of sellers looking to offload large portfolios before the year-end in expectation of the market moderating in 2020. However, demand from buyers remains strong, exacerbated by a relative dearth of attractive assets, which is forcing even cautious investors to consider more risky, greenfield development opportunities.

The French market, by contrast, has experienced a slow year with yields at an historic low, while in Spain activity by funds specialising in distressed assets remains a dominant theme with the big U.S. funds, such as Blackstone and Cerberus, still active alongside new investors in the region, such as Korean pension funds. Spanish banks continue to seek buyers for non-performing loan portfolios five years after this activity started and the secondary market remains busy as funds look to make exits.

In Poland, despite projects of significant scale across a range of asset types, particularly offices and logistics, deal values tend to be considerably lower than in other European jurisdictions.

Despite worries about currency and the slowing of growth, activity in the mainland China market has remained strong over the last 18 months, again partly driven by a shortage of good assets, which is driving up valuations. Platform-type deals predominate and we are seeing international funds taking increasingly innovative steps to reposition and restructure existing portfolios, recycling existing assets and enticing new investments from long-term investors as limited partners.

In the Middle East, efforts to diversify from a dependence on oil revenues continues to drive outbound investment into international real estate, although in many locations within the region real estate valuations have fallen in recent years. However, there are now signs that the market may have found a bottom and there have been some high profile investments by international funds, including the recently announced AED5bn (USD1.36bn) joint venture between the Dubai government owned developer Meraas and Brookfield.

A number of “mega-projects” in Saudi Arabia are at the planning stage, including a large number of hotels to be constructed along the Red Sea coast and some of these are now moving towards the implementation phase. The progress of this implementation (and the sources of capital used to fund it) will be closely watched by market participants.

The search for alternatives

Despite these regional differences, one theme remains fairly consistent in a wide number of markets – the search for alternative investment opportunities that offer the potential to earn higher yields than those available on traditional core real estate assets like offices and retail. Investors have shifted their focus towards operational assets with potential for stable long-term income growth. These tend to be less cyclical in nature.

Student housing is one example. Although a fairly well developed market in the UK, there are a growing number of developments planned in France, Germany and Spain. Investors clearly see this as a growth market, as public sector investment declines in this area and young people prolong their studies at a time when the job market remains uncertain.

Data centres and warehouses are also increasingly popular alternative investment options in many markets, driven by technological and social change. Where logistics is concerned, there is a concerted focus by major funds on “last mile logistics” – storage space sited close to the final product destination, often created by converting traditional retail property into local warehousing.

The demise of traditional retailing is a consistent theme across regions, as shoppers increasingly go online to make purchases rather than visit the high street or shopping centre. That trend has been acutely apparent in the UK (which leads the way in retail disruption) in recent months as a growing number of major retailers, including Arcadia, Debenhams, House of Fraser and Monsoon, seek to close outlets or renegotiate rents, often through contested Company Voluntary Arrangements (CVAs).

Landlords and developers are responding by working to change the use of retail schemes to include a mix of residential, office, retail and leisure amenities such as restaurants, bars and cinemas. The focus is on repurposing and right-sizing. Flexibility is key – property that cannot be flexible will struggle.

A number of large-scale retail centres continue to thrive in their own right, but to attract investment and debt financing most centres need new ways to attract footfall, even if that involves navigating government and local authority planning rules. Where such schemes are under development, they are, however, attracting opportunistic international investors.

The impact of Brexit on the European market remains uncertain as is the wider global economic impact of the continuing U.S./China trade standoff. Taking into account these political and economic head-winds, coupled with the historic cyclical pattern of the real estate market, it would not be surprising to see a slowdown in deal activity in the course of the next year.

However, given the demand for assets, record levels of capital targeting the sector, and the willingness of investors to pursue alternative investment opportunities or create innovative platforms, we would expect to see the market moderate rather than to decline sharply. The real estate boom of recent years appears to have some way to run. Furthermore, where distress does hit, there is an increasing number of investors waiting to seize these opportunities and it is likely that non-performing assets will be actively managed, rather than left in a “zombie state” such as that following the financial crash in 2008.