Irish 1907 Limited Partnerships (1907 LPs) are an alternative to traditional regulated Irish structures and other limited partnership structures globally. They are well suited to private equity and other illiquid investments such as infrastructure and other real-economy investing, but can be used for any type of investment.

1907 LPs are formed under the Limited Partnerships Act 1907, as amended (the Act). The Act is identical to the legislation that created the English and Scottish Limited Partnerships, enacted in 1907, prior to the independence of Ireland from the United Kingdom.

Unlike other structures in Ireland such as the ICAV, the Act does not require Central Bank of Ireland (CBI) authorisation or regulation for a 1907 LP to carry on business. As such, 1907 LPs are not regulated at product level, but can provide investor comfort by appointing a regulated Alternative Investment Fund Manager (AIFM) to manage the assets and other day-to-day activities.

Where a 1907 LP appoints an AIFM and a depositary, it is able to avail of the benefits of the pan-European marketing passport under the Alternative Investment Fund Managers Directive (AIFMD) (2011/61/EU). 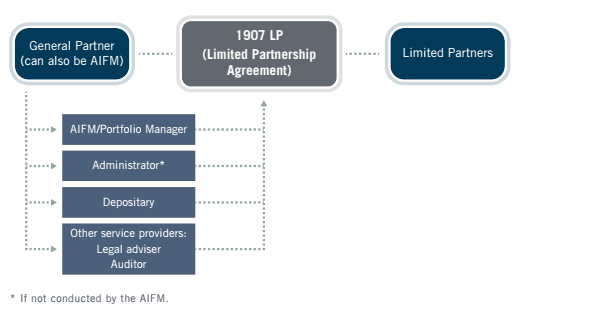 Because 1907 LPs are not regulated by the CBI, this allows the use of terms not currently permitted by the CBI in regulated structures, such as: excuse provisions; tranching of interests; and the ability to provide bridge financing to portfolio companies, if such terms are agreed between the partners. The ability to include such provisions means the 1907 LP structure is commercially appealing as a stand-alone structure and can easily act as a parallel structure to e.g. Cayman or Delaware limited partnerships. With its ease to set-up, flexibility of terms and the ability to access the pan-European market under AIFMD, the 1907 LP is an investment fund structure that should not be overlooked.

The 1907 LP has many features similar to other limited partnership structures utilised for investment funds globally, such as:

Other features of the 1907 LP that are more unique and should be considered are: