With oil prices recovering and greater pricing certainty bringing a quiet optimism to the market, the pieces are in place for oil & gas M&A to return to the fore in 2018.

Since the oil price crash that took hold in 2014, global oil & gas M&A figures have been muted. 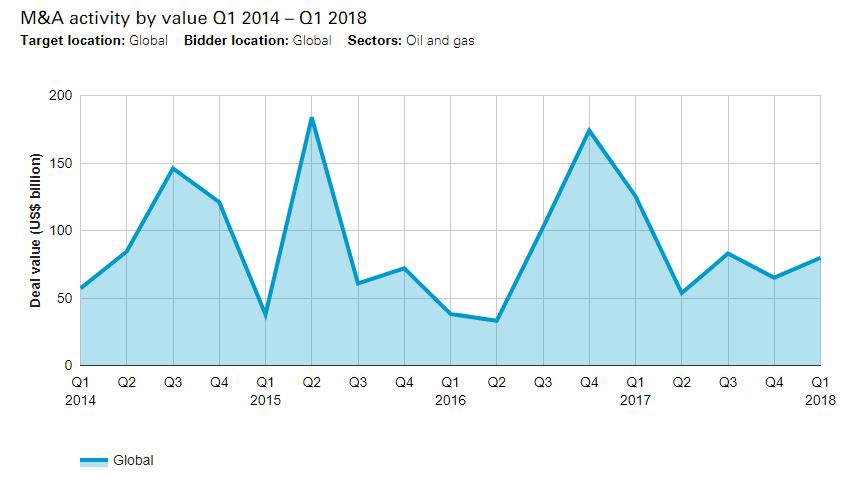 While declaring a rebound in oil and gas M&A would be premature, the stabilization of oil prices should spur dealmaking activity in 2018 and beyond. At the end of April, crude oil prices reached their highest levels since 2014, following five consecutive quarters of global oil inventory draws, according to the U.S. Energy Information Administration (EIA). Prices hit US$68.56 per barrel in April (West Texas Intermediate) and averaged US$66.25 for that month—the highest average monthly price in more than three years.

Oil price stability creates an environment conducive to M&A as buyers and capital providers gain confidence in the possibility of an upward trend in prices. With continued backwardation, sellers may also perceive limited upside in retaining non-core assets. If these favorable conditions persist, deal activity should rise.

A survey conducted by consulting firm A.T. Kearney found that more than 66% of respondents expect at least 10% more M&A deals over the next 12 months, as companies adapt their strategies to a confluence of factors, including the ongoing transition from fossil fuels to renewable energy, a change in oil and gas demand expectations and digitization.

As of 2016, the US had become the top oil-producing country in the world, according to EIA figures. The US dominates the global oil & gas M&A market: deals targeting the US in the first quarter of 2018 (61 deals, US$54 billion) accounted for 67.8% of global M&A value within the sector.

The explosive growth of US shale over the last decade has resulted in a highly competitive, fragmented market. As it has matured, the market has benefited from falling production costs, increased efficiencies and technological advances, all causing the industry to thrive despite pressure on profits.

At the same time, the oil & gas sector's so-called “supermajors” have been dialling back on exploration and have made budget cuts in order to long-cycle projects to weather the low-price environment—meaning their crude reserves have waned and need replacing. In many cases, it is cheaper for the supermajors to simply make acquisitions in the shale space, which is primed for consolidation, than to bring new projects online.

This has resulted in strong interest, particularly in the Permian Basin in West Texas, where production has approximately tripled since 2011 according to the EIA. In 2017, ExxonMobil—the largest energy group in the US—acquired Permian resources for US$6.6 billion. In January ExxonMobil announced plans to increase its shale oil production in the basin fivefold, to 500,000 barrels a day, by 2025.

Meanwhile, Royal Dutch Shell has disclosed plans to spend some US$2.5 billion a year on US shale assets, around one-tenth of its total spending, as Big Oil makes a belated entry into the space.

PE picks up the pieces

It seems that private equity (PE) has called the bottom of the market. While the value of total M&A has slipped year on year, PE firms claimed US$60.7 billion in transactions within the oil and gas space in 2017—the highest annual value on record. This strong activity continued into 2018, with 17 deals worth US$12.6 billion up 11.5% in value compared to the start of 2017.

On a global basis, however, it is conventional oil and gas assets that are drawing the interest of institutional asset management firms. Not only is there confidence in the profitability of mature reserves at current oil prices, but the majors are also continuing to work through divestment programs. At the beginning of 2017, Shell stated its aim to raise between US$22 billion and US$24 billion by offloading assets over the following two years.

In November 2017, Shell offloaded North Sea assets worth US$3.8 billion to Chrysaor, backed by Harbour Energy, the investment vehicle managed by EIG Global Energy Partners. In February, Neptune Oil & Gas Ltd.—a startup led by a former Centrica CEO and financed by Carlyle Group and CVC Capital Partners—closed the acquisition of assets, also in the North Sea, from Engie for US$5 billion. The deal has reportedly brought Carlyle International Energy Partners, the fund launched in 2013 to make non-US energy deals, close to full investment. Carlyle is expected to follow up with a US$2.5 billion fund to continue the strategy, fulfilling investor demand for investments into the sector.

While overall M&A value targeting oil & gas assets dipped in 2017, record levels of PE interest in the sector highlight the long-term strategic value of oil and gas assets. A continued recovery in oil price—predicted to remain buoyant if OPEC continues to allow oversupplies to drain out of the system—looks set to brighten the outlook further by reducing the bid-ask spread and creating a more deal-friendly M&A environment.