The Internet of Things (IoT) was born when the number of connected devices exceeded the global population. With the IoT, the physical world is becoming one big information system. The number of IoT devices reached 8.4 billion in 2017 and it is estimated that there will be 30 billion devices by 2020. This technology is expected to dramatically change not only how we work, but also how we live. With the decreasing cost of technology required to control these devices and increasing connectivity through smartphones, the IoT is expected to be an all-pervasive technology in the next 10 years. The global market value of the IoT is projected to reach $7.1 trillion by 2020. Further, a McKinsey study estimates that the potential economic impact of the IoT will rise from $2.7 trillion to $6.2 trillion per year by 2025 with applications in healthcare, manufacturing, power, urban infrastructure, security, vehicles and agriculture.

The bulk of patent-related activity in the IoT domain is taking place in the sector of resource management in a wireless network. The patent distribution (owners) in this domain is fragmented. LG holds the largest patent portfolio (around 5%), closely followed by Ericsson and Qualcomm. The United States has the most patent filings, closely followed by Japan, Korea and China.

In terms of high-quality patent portfolios and patent filing activity, Qualcomm is the leader in this domain. 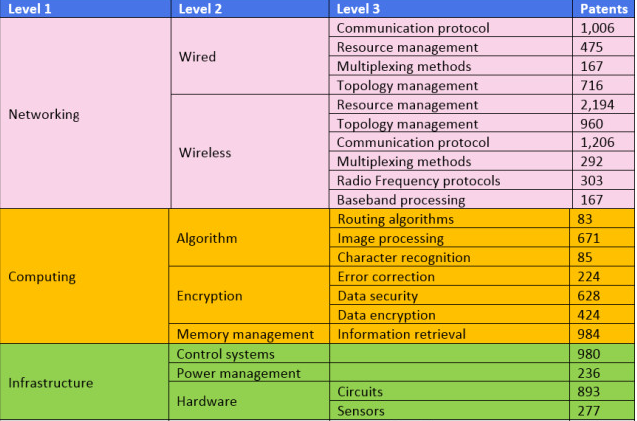 As is clear from the above, the IoT has been a hotbed of innovation with a large number of firms investing in this domain.

Obtaining a patent in the IoT domain is not easy. Firms that operate and innovate in this sphere face several challenges, which can be broadly divided into four categories.

Challenge one: scope of claim

IoT systems involve multiple devices working together to achieve a particular goal. As a result, there are many different ways in which the same invention can be claimed in a patent application. These include:

However, due to costs, most patent applications are limited to between two and four independent claims.

IoT technology is interactive and often implemented by systems in multiple locations. An inventor could therefore end up with more than one party infringing its patent rights. The various components that create the IoT system can be sold, owned and operated by different companies.

The current rule – as established in Akamai v Limelight – is that there may be infringement liability when the many operations are performed by multiple parties, for example, a single defendant “exercises ‘control or direction’ over the entire process such that every step is attributable to the controlling party”. However, this is a high standard to meet.

Patenting inventions in the IoT domain has become more challenging in the wake of the Supreme Court decision in Alice. The following explains the scenario in detail.

IoT broadly involves the convergence of many technologies, the chief among them being:

Essentially, the IoT employs the abovementioned technologies in their current state of art and does not improve their function. The IoT enables these technologies to connect and exchange data, thereby creating opportunities for a direct integration of the physical world with computer-based systems. This results in improvements in efficiency, economic benefit and reduced human exertion.

Since the underlying objective of IoT ecosystems is to make economic gains and optimise processes, there is a high chance of an IoT invention being characterised as an abstract idea that produces no technical improvement or tangible result.

However, as the USPTO and district courts continue to sort through the mess created by Alice, it is likely that the quality of IoT patents will improve as more companies start to put a stronger emphasis on drafting robust patent applications that will hold up under close scrutiny.