It’s that time of the year once more in Australia: National Ride2Work Day (Wednesday 16 October 2019). In celebration of pedal power, here’s a tour of some weird and wacky cycling patents: 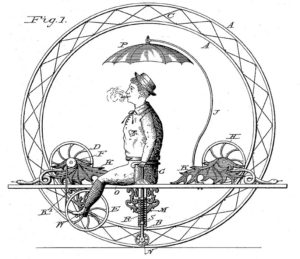 This curious vehicle, where the rider sits inside the wheel, was patented by John Otto Lose in 1885.  I love the way the illustrator has gone to the trouble of including a little umbrella in case of rain (not an essential feature of the invention). 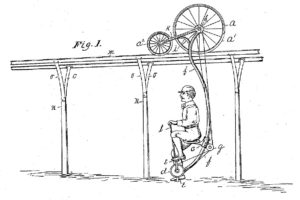 Another slightly bizarre contraption was invented by Hiram Nickerson and patented in 1896.  The crucial problem, which seems to render this invention almost completely impractical, is that without a network of elevated track, the aerial bicycle can’t go anywhere. 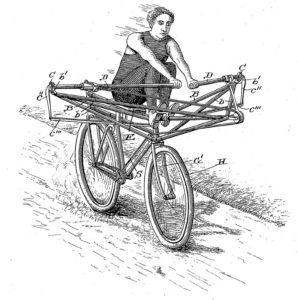 Like the idea of rowing and fresh air but scared of the water?  No problem!  Louis Burbank has the solution for you with this rowing bicycle, patented in 1900.  More recent iterations of such a machine are available for purchase in 2019, but I suspect it’s probably a niche market. 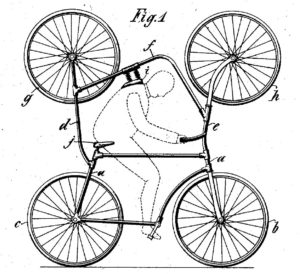 Next up, it’s Karl Lange’s patent, granted in 1905, for a “double bicycle for looping the loop for circus and other performances.”  I’m not sure I fancy my chances with this one.  Especially without a helmet. 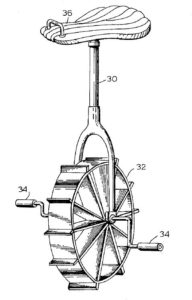 More recently, Ralph and Kathryn Mansolill’s 1980 patent is for a device useful for exercising in a swimming pool or other body of water.  The general idea is not to achieve some sort of miraculous unicycling on water.  In essence, the device is buoyant so that it can support a person “in a substantially seated upright position in the body of water such that the neck, head and upper shoulders of the person remain out of the water, allowing the person to exercise the legs, arms and torso while neutrally buoyant.” 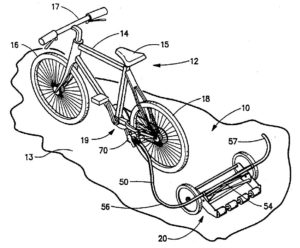 Mowing apparatus adapted to be towed by a pedal-operated vehicle and the like (US patent 5,410,864)

Can’t afford a motorised ride-on lawnmower?  In 1995, Thomas Lacy and Kenneth Shackles, Jr. patented this mowing apparatus adapted to mount to the frame of a vehicle such as a bike.  Especially handy if you have a long, thin lawn. 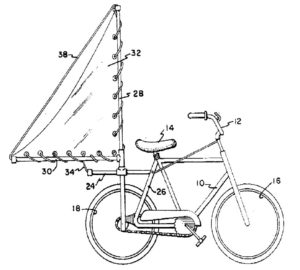 Apparatus for harnessing wind to drive a bicycle (US patent 6,932,368)

Granted in 2005, Vladimir Zam’s patent protects his sail attachment which, when connected to a bicycle, harnesses wind to drive the bicycle forward.  My assumption is that it’s not intended for use on crowded city streets and I guess it might take a bit of practice not to fall off and hurt yourself when the wind changes direction.  However, Google suggests that others have also proposed bicycles with similar attachments – so perhaps this idea may have wind in its sails yet. 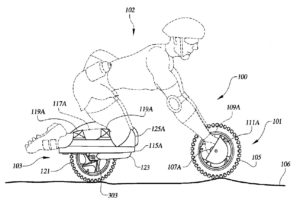 Do you live in a small apartment and don’t have space for a bicycle?  Just do away with the frame.  And the pedals.  Indeed, Justin Trenary’s 2004 patent does just that.  It’s an interesting concept, probably quite exciting for downhill riding, but I’m not tempted to replace my commuting bike with one of these any time soon.