JCT v NEC: Which contract is right for your project?

We are often asked when to use the JCT v NEC suite of contracts. In this article, we examine some of the main differences between the key JCT and NEC4 contracts. Generally, NEC contracts are aimed at engineering projects but are easily adapted to building works. JCT contracts are aimed at building works rather than engineering projects but again can be adapted for both.

JCT contracts are considered by the majority of the UK construction industry to be a market standard for building projects and therein lies one of the main challenges to using the NEC forms, people are more familiar with the JCT forms. Whilst NEC contracts are drafted using plain English that can be easily understood, there is still a reluctance amongst those who are familiar with the JCT to switch.

In RIBA Construction Contracts and Law Report 2022, published earlier this year, 71% of those surveyed reported using JCT contracts during the past 12 months, in contrast to 31% reported using NEC contracts.

What is a JCT Contract?

The Joint Contracts Tribunal (JCT) was established in 1931:

What is a NEC Contract?

The New Engineering Contract (NEC) was established in 1991:

What’s the difference between NEC and JCT contracts?

There are several key differences between the JCT and NEC contracts. Traditionally JCT’s approach has been seen as encouraging a more adversarial approach to contract management, with the exception of its Constructing Excellence Contract.

The NEC seeks to encourage a more collaborative approach to managing the contract. Indeed, at the heart of the NEC suite of contracts is an express obligation for the parties and, taking the NEC4 Engineering and Construction Contract as an example, the Project Manager (PM) and Supervisor to:

‘act in a spirit of mutual trust and co-operation’

What does this mean in practice? Case law on the meaning of these types of obligation is limited but perhaps not as far reaching as the NEC hopes (i.e. to apply to all of the contractual obligations). In Costain v Tarmac , the court held that the ‘mutual trust and cooperation’ duty meant that a party cannot say or do something which lulls the other into falsely believing that a contractual time bar was either non-operative or could not be relied on.

The two types of contract also adopt a fundamentally difference approach to risk allocation and management.

We have detailed some further key differences in the table below, focussing on features in some of the main contracts in the JCT and NEC suite e.g. the JCT Design and Build Contract, the JCT Standard Building Contract and the NEC4 Engineering and Construction Contract (ECC). Note: Not all contracts in the suites of contracts have each of the features detailed below. 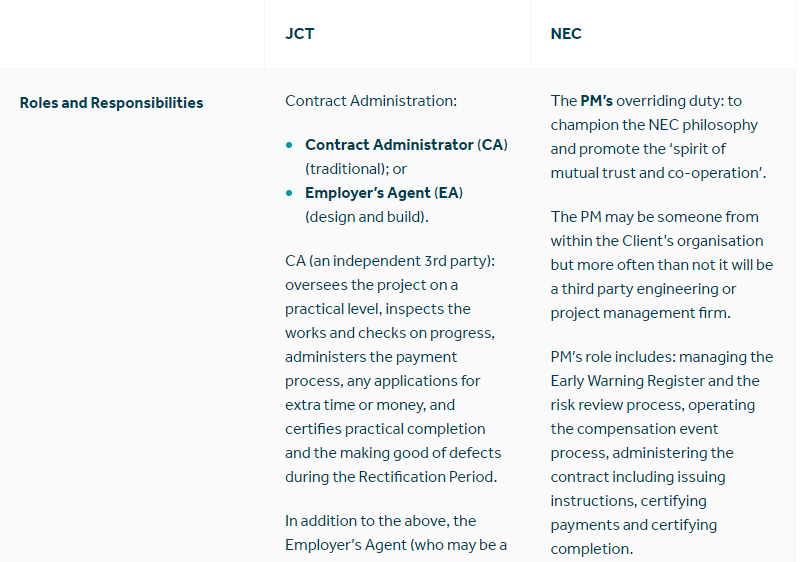 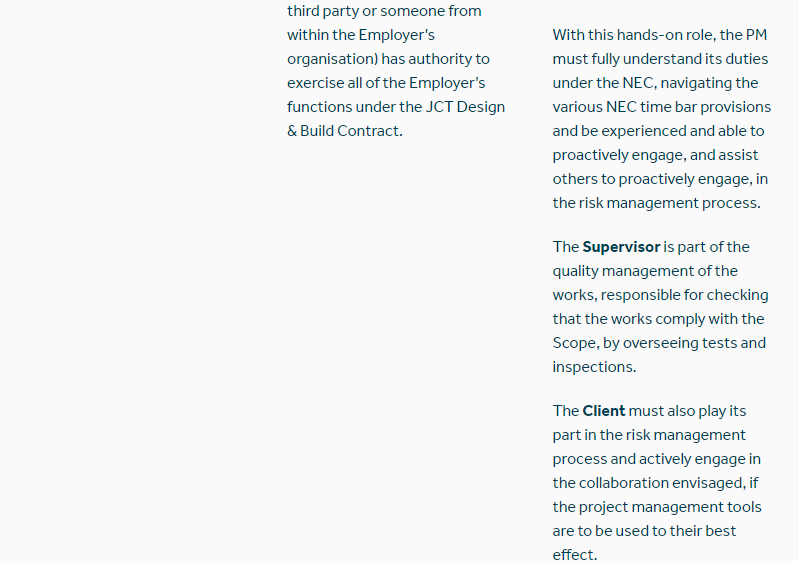 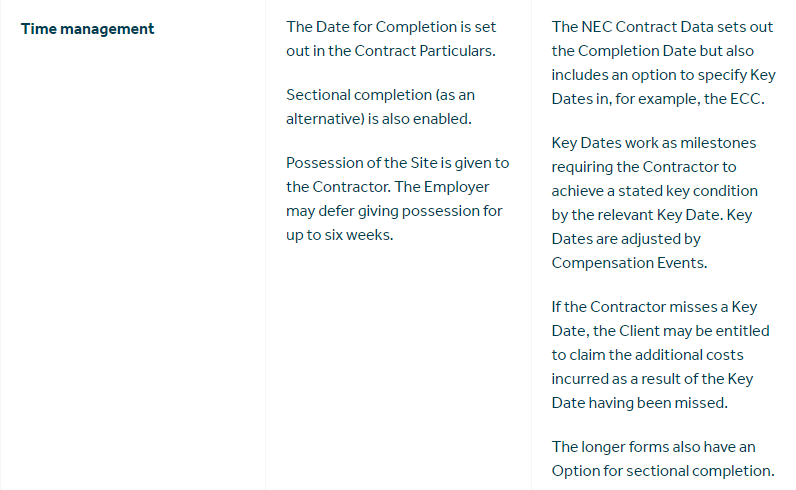 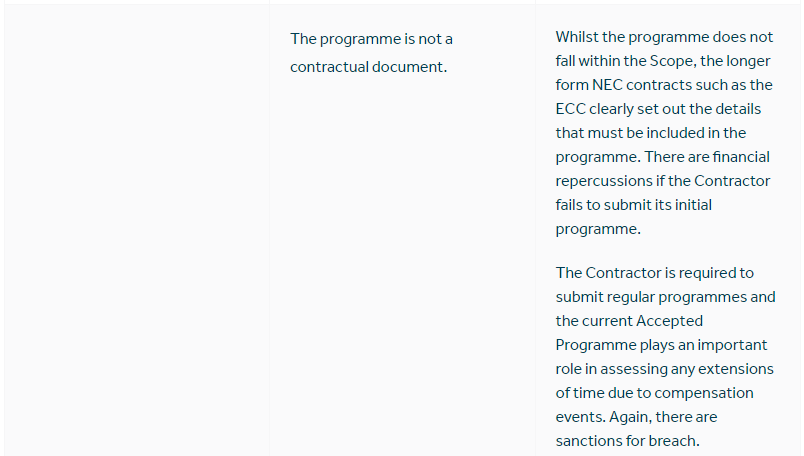 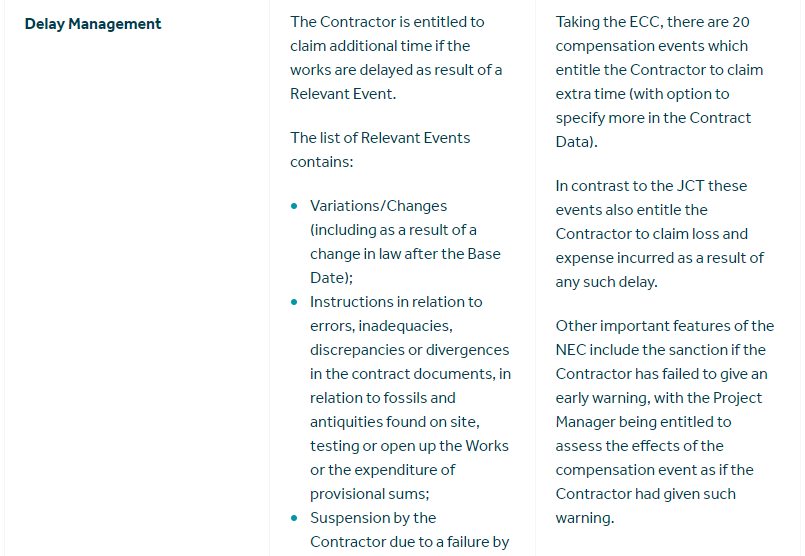 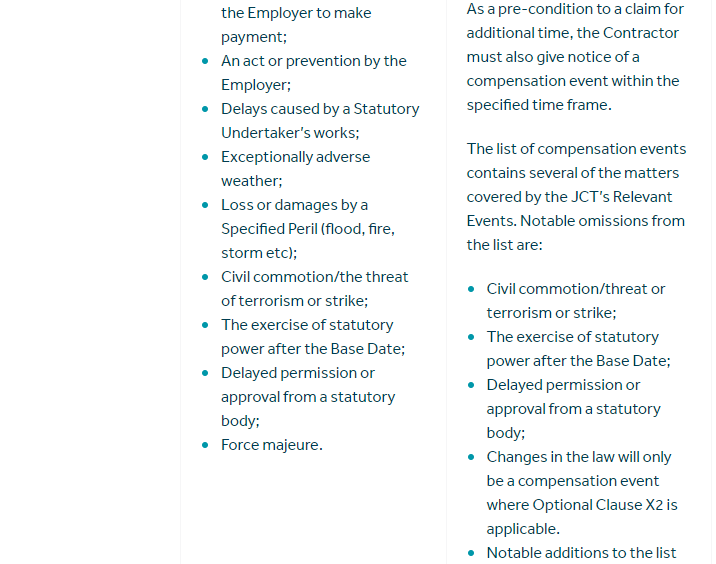 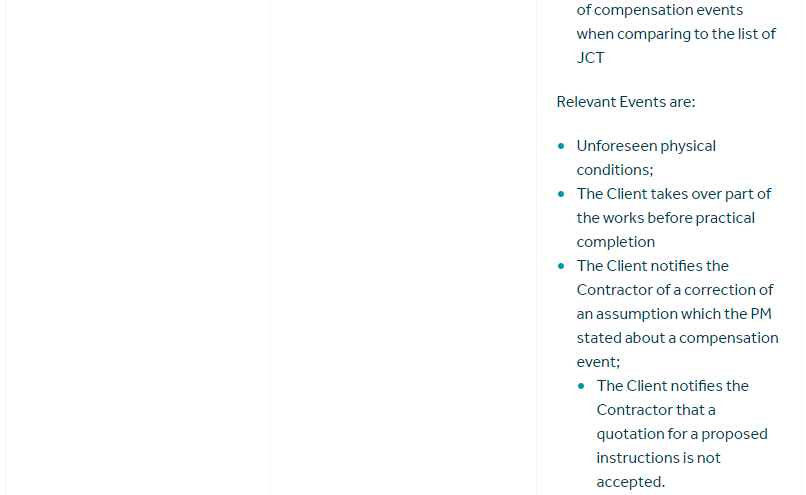 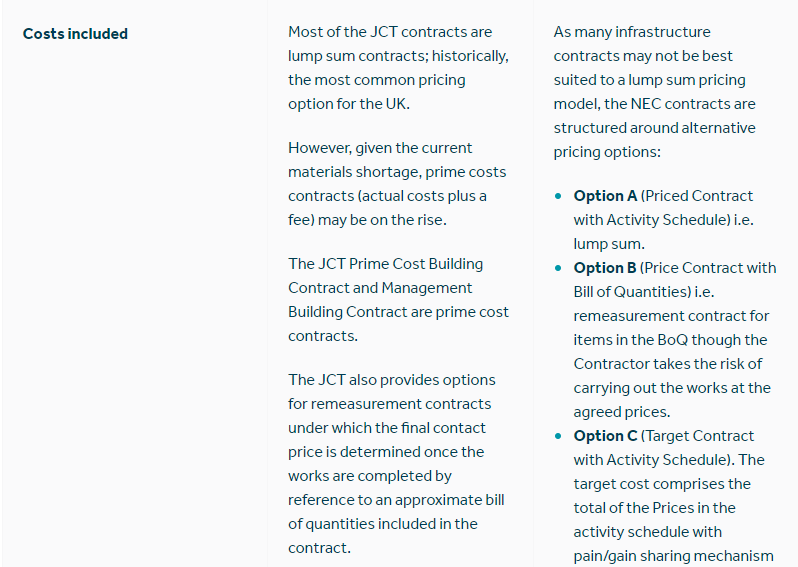 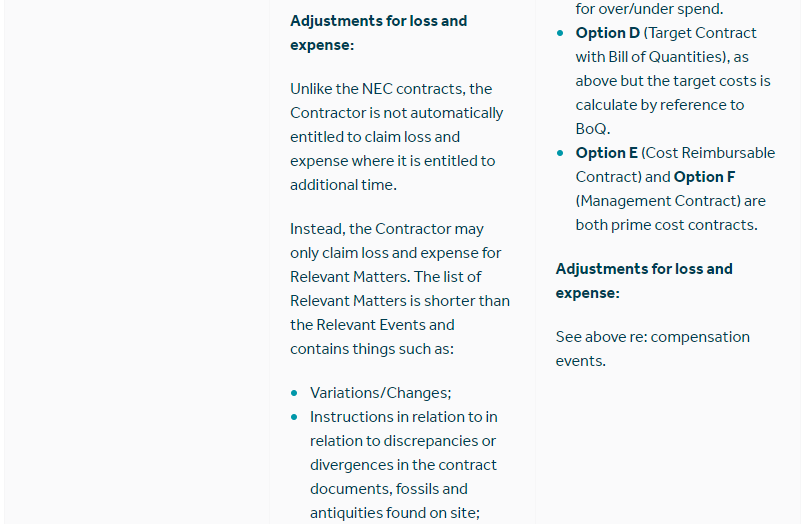 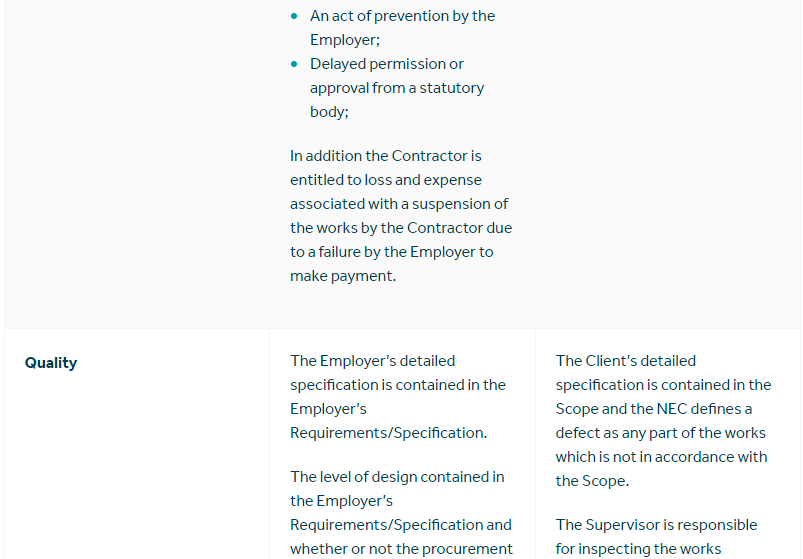 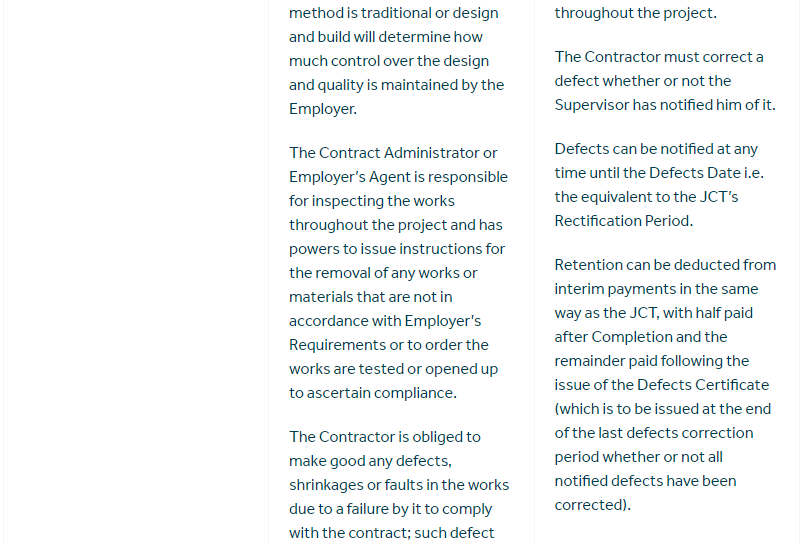 When would you use a NEC contract?

NEC contracts are flexible and can be easily adapted to suit difference methods of procurement and different pricing structures and they are designed for use domestically in the UK and abroad.

A good example of how the NEC works well, particularly for public bodies procuring works on frameworks, with the need for inbuilt flexibility, is the MoD’s £1.3 billion refit of its nuclear submarine base on the Clyde estuary in Scotland. In that case, the MoD is reportedly using an NEC4 based framework (awarding 10 year framework contracts in May 2018 to 3 contractors), with work packages to be awarded by direct award or competitive tender on a target cost basis (ECC Option C) but with flexibility to instead use the ECC Option A (Priced Contract with Activity Schedule) or ECC Option E (cost reimbursable) or, for smaller works, the shorter Engineering and Construction Short Contract.

Another key feature of the NEC contracts is the emphasis on collaboration and best practice project management. The Defence Infrastructure Organisation responsible for the refit stated that a key objective of the framework was to encourage a more collaborative approach to working in such a high security, highly regulated and highly congested operational environment.

When the project team needs to work collaboratively, undertaking optioneering to find process solutions which both achieve the Client’s requirements on performance and budgetary constraints, the NEC contracts have the project management tools to drive the right behaviours.

This is a good example of how the NEC contracts lend themselves well to larger, more complex projects particularly in the engineering/infrastructure sector.

When would you use a JCT contract?

JCT contracts are preferred by employers who want to retain a greater level of control over the project delivery and are generally favoured by domestic commercial developers and their funders.

JCT remains the most popular form of contract for projects in the UK but with the NEC being widely endorsed by a number of government bodies and organisations around the world, its use is increasingly more common.