In short, the Single-Use Plastics Directive notably bans as from July 3, 2021, the use of certain single-use plastic products, which are considered as the most found as marine litter, such as cutlery (forks, knives, spoons, chopsticks), plates, straws, beverage stirrers, certain food and beverage containers, as well as cups made of expanded polystyrene and products made from oxo-degradable plastics. It requires for beverage containers of up to three litres to be permitted on the EU market as from July 3, 2024, that they have their plastic caps and lids attached to the container during the product’s intended use stage. The Directive calls for the adoption of European standards in this regard.

The Directive calls for the European Commission to adopt guidelines to provide guidance on the categories of products covered by the Directive.

The Directive also calls for the EC to adopt a certain number of implementing acts. 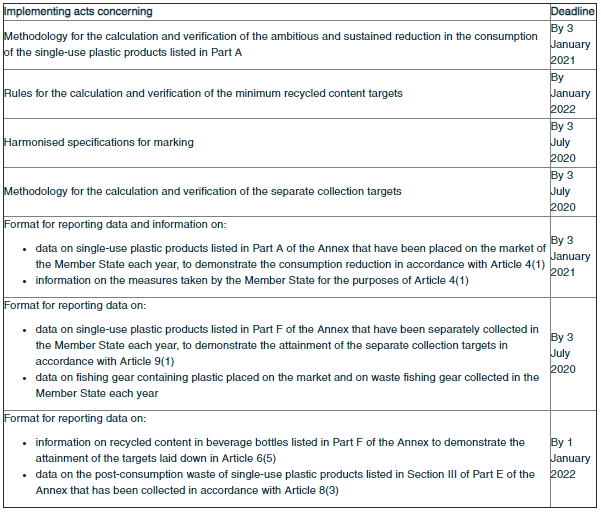 To support the EC in determining what products should be regarded as single use plastic, a first survey was run as Phase 1. The Phase 1 survey was divided into two parts: Part 1 focused on general and product specific definitions, explanations, criteria, and Part 2 dealt with product markings. The Phase 1 survey was conducted in September/October 2019. Additionally, Ramboll had conducted stakeholder workshops in October and November 2019. The preliminary outcome of the first phase of the survey shows that many terms used in the Single-Use Plastics Directive are not well-understood, such as the difference between a “beverage container” and a “beverage bottle,” or what is meant by “packets and wrappers.” A second workshop is scheduled to take place in March 2020 where Ramboll will present the outcome of its review. The labelling of single-use plastics has also stirred a large debate amongst stakeholders. The selected marking options will be tested with consumers. This consumer survey is supposed to last six months and will be run by a separate contractor. A follow-up workshop dedicated to marking is intended to take place in May 2020.

The second survey focuses on the following issues: