The turmoils of Gladys Liu raise a genuine question about citizenship

The criticisms against Liu straddle genuine concerns about influence and mundane xenophobia, but there's a bigger section 44 question here. 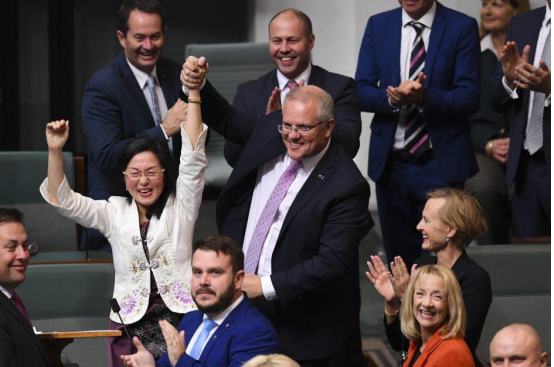 We were premature in thinking that Scott Morrison would be haunted by the image of him cradling a lump of black coal. There's an even better parliamentary picture: Scott, holding aloft the hand of the freshly elected Liberal Member for Chisholm, Gladys Liu.

Liu is lit up like Christmas, following her interview with Andrew Bolt on Sky for which "trainwreck" is way too generous a label. Liu failed to recall her membership of the China Overseas Exchange Associatio (COEA), then denied it, then admitted it the following day before she was bundled out and buried up to her neck in the prime ministerial flower bed for national security reasons. The COEA is just one of a number of jolly clubs with which she has been associated, linked to the Communist Party's United Front network, its principal means of seeding influence in other countries.

Bolt's closing flourish: "Gladys Liu, are you in effect a spokesman for the Chinese communist regime in Australia?" No, replied Liu, leaving the tantalising possibility that she's actually a spokeswoman. She has since reassured everyone that she is a loyal Australian, one of those cute oaths that we only ever make non-white citizens swear.

Unsurprisingly, Labor has sought to make an omelette with the eggs Liu left all over the walls. The question the opposition is framing for the public mind, eagerly picked up by the media, is this: where lies Liu's allegiance?

It is true that Liu has failed to provide a coherent answer to a number of questions.

There is her long involvement in numerous organisations closely linked to the Chinese regime. Her responses so far offer no comfort. She has also only added to the confusion regarding $300,000 in donations to the Liberal Party from people she allegedly invited to a fundraiser in 2015, which the media reported had to be refunded because of concerns about the donors.

Separately from her new self-generated disasters, Liu is facing a case in the Court of Disputed Returns (along with Josh Frydenberg) challenging her victory at the May election.

The case regards allegations of illegal misleading conduct by the Liberal Party in its posting of Chinese language signs in AEC colours that directed voters to give their first preference to the Libs. If she loses, her election will be declared void and there will be a byelection.*

In the meantime, if the government can't kill this scandal (which looks unlikely), then sooner or later it will have to address Liu's issues rather more seriously than she has been able or prepared to do.

Ultimately, while her situation is in part a muddled intersection between genuine concerns about Chinese government influence and mundane "yellow peril" xenophobia, there's an actual question at its root regarding the integrity of the Australian parliament.

Our constitution retains some anachronistic rules about who is or isn't eligible to sit in parliament, exposed in recent years by serial section 44 cases over dual citizenship and pecuniary interests. However, there is a ground for expulsion that has never been successfully invoked but could come into play if Liu's story isn't adequately clarified.

Section 44 disqualifies from parliament, in addition to foreign citizens, anyone who is "under any acknowledgement of allegiance, obedience, or adherence to a foreign power". Call it the foreign agent provision.

The High Court has been asked twice to invoke this law, and both times said no. In 1949, Gordon Anderson was elected in the Sydney seat of Kingsford-Smith. He was challenged on the grounds that, as a Roman Catholic, he owed an allegiance to a foreign power: the Vatican. True, the Vatican is a country; but the court was having none of that anti-Papist rubbish which had been made obsolete in 1829 when the United Kingdom finally allowed Catholics to sit in parliament. Freedom of religion, which the constitution separately guarantees, trumped any suggestion of divided loyalties by virtue of personal faith.

The question next came up in 1987. Elaine Nile (wife of Rev Fred) challenged Robert Wood, who had beaten her to a Senate seat representing NSW. Among her grounds was that Wood had, years earlier, been convicted of a criminal offence of "obstructing shipping", and this action "against the vessels of a friendly nation" indicated that he had an allegiance to a (not identified) foreign power.

Entertaining argument, but the High Court is not for cheap thrills. The case was kicked out, although the judges did make one interesting observation: section 44, they said, will only operate on a person who has "formally or informally acknowledged" a foreign allegiance, and not withdrawn or revoked it.

What this would mean for Liu, if she found herself facing a section 44 challenge (which now can only be referred to the court by the House of Reps), is that her professed accidental membership of various Communist Party-front organisations would not likely be enough to meet the test of allegiance to a foreign power. There'd need to be a much smokier gun than has so far come to light.

The logical conclusion is that Liu is just what a party should expect to be lumbered with when it doesn't do its due diligence on candidates.

If I could draw a cartoon, it'd be about a lump of coal called Gladys.