ASIC foreshadowed the need for ‘enhancements’ to the ASIC mandatory form for reporting, as well as considering the need for additional guidance on the Reportable Situations Regimes.

It has also stated that it will not be identifying individual licensees in its October 2022 public report on the Reportable Situations Regimes, although later reports may include a list of all licensees who have reported to ASIC during the period.

Practical changes may be welcomed, but are licensees prepared for public reporting?

The Reportable Situations Regimes commenced in October 2021, following a process of review and consultation going back to the ASIC Enforcement Review Taskforce in 2017. The Financial Services Royal Commission also supported changes being made to the former ‘breach reporting’ regime, which had been in place, largely unchanged, since the ‘Financial Services Reform’ amendments to the Corporations Act in the early 2000s.

Notwithstanding the four-year period of consideration for reform to the former breach reporting regime, concerns were raised from participants in the financial services sector about potential issues with the proposed reforms. Of those, the concern that the proposed reforms would result in significantly greater numbers of notifications being made to ASIC was a significant one. The introduction of reporting requirements to credit licensees also caused considerable compliance costs in that sector.

Those industry concerns have proven to be well-founded. Despite the goal of the Reportable Situations Regimes being to introduce more certainty in the reporting of compliance matters to ASIC, there remain a number of practical issues. The substantial increase in the number of reports that Australian financial services licensees and Australian credit licensees are required to make to ASIC, and the potential regulatory consequences of these, has been uppermost in the minds of many.

ASIC to the rescue? Maybe…

The above points represent a positive development from ASIC and are sensible actions. To be most effective, we suggest that any ASIC guidance should be made following public consultation and that the focus on implementation issues and engagement with stakeholders should consider:

We suggest that law reform to the Reportable Situations Regimes (or ASIC guidance) could cover a number of areas, as detailed below. 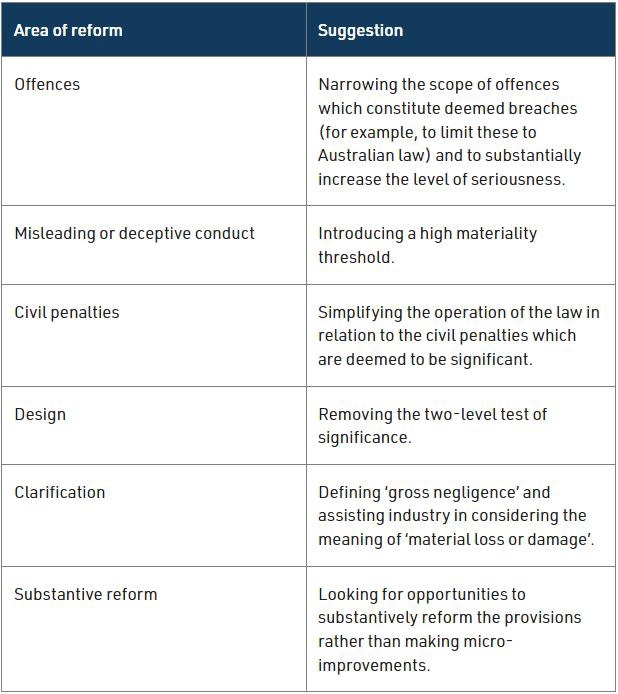 The elephant in the reportable situation room

ASIC’s announcement is also a stark reminder of the elephant in the reportable situation room: the intended publication of information about matters which are notified to ASIC under the Reportable Situations Regimes.

Given the uncertainties with the Reportable Situations Regimes, it is understandable that, for the time being, some licensees are choosing to take a conservative position and ‘over report’ to ASIC. However, this may mean that public information about reporting may lead to a sensationalised focus on ‘over reporters’ if and when they are identified by ASIC. While ASIC is proposing to delay the granular identification licensees until 2024, a lack of consistency between licensee approaches will subsequently arise unless addressed earlier.

ASIC has indicated that it will publicly report on reportable situation data in October 2022. We consider this to be an excellent time for ASIC, or preferably the Treasury, to consider law reform and begin the first stage of consultation on substantive reforms and guidance to improve the implementation of the Reportable Situations Regimes.