Social security contributions vary enormously by country. Click to see a chart of our findings from 31 jurisdictions around the world. 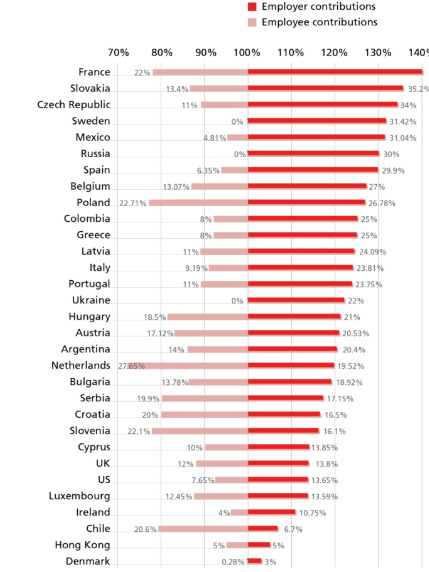 When reading the graph, please refer to the text for each country and note the following:

The schemes included vary by country. For example, some cover unemployment and others do not. Some countries also require the employer and employee to pay into different schemes.

Rates may vary according to the type of job or industry, but we have chosen what we think is a representative rate.

Rates may vary based on the area of the country, but we have chosen what we think is a representative rate.

There may be other ways in which the rates vary, for example, the type of contract the employee has or the amount the employee earns. If there are different rates for fixed or permanent contracts, we have chosen to show the rate for permanent contracts. Where the rates vary according to what the person earns, we have chosen an average salary in the country concerned.

The thresholds may vary, but we have chosen what we think is a representative figure.

The caps may vary, for example, according to the different elements insured.

There may be voluntary contributions people can make to cover them for different elements (e.g. to get family allowances). We have included these if in practice people tend to pay them.

The rates may vary based on the risk involved in the job. If so, we have made a judgment about what would be a reasonable mid-point as an illustration.

If there are different figures for blue and white collar workers, we have given the figures for whichever category has the highest number of workers nationwide.