Large, late stage private capital raises for privately held companies continue to be the preferred method of financing growth for many new companies, particularly those in the tech sector. A recent analysis conducted by data provider CB Insights examined what the industry calls “mega-deals” or “private-IPOs,” which are private placements raising over $100 million in proceeds. These deals, which have a median deal size of $160 million, have largely contributed to the emergence of unicorns, or private companies valued at over $1 billion. This trend in private capital raising has become more prevalent since the enactment of the JOBS Act in 2012, which has made it easier for companies to remain private longer. 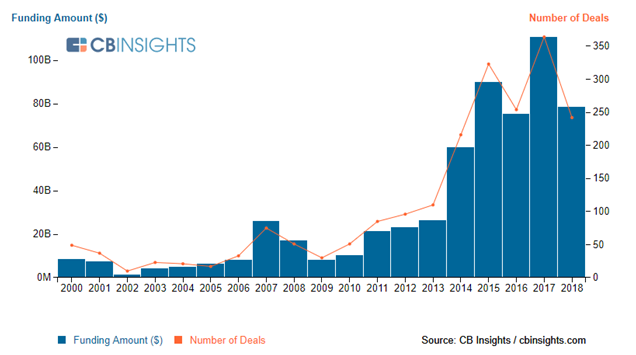 A closer look at the data compiled by CB Insights shows that, over the last five years in the United States, over 90% of capital raises for private companies were later stage or mezzanine investments. These deals have raised over $300 billion in capital for companies, with $151.7 billion of these deals fitting into the rubric of “private-IPOs.” Based on the CB Insights analysis, it would appear that transaction volumes for 2018 are on pass to surpass those in 2017. While legislators contemplate the capital formation-focused package of legislation that has been dubbed “JOBS Act 3.0,” and consider measures to make going public more compelling, it’s clear that there is no shortage of private capital to finance promising companies.