Mid-year numbers in prior years were as follows: 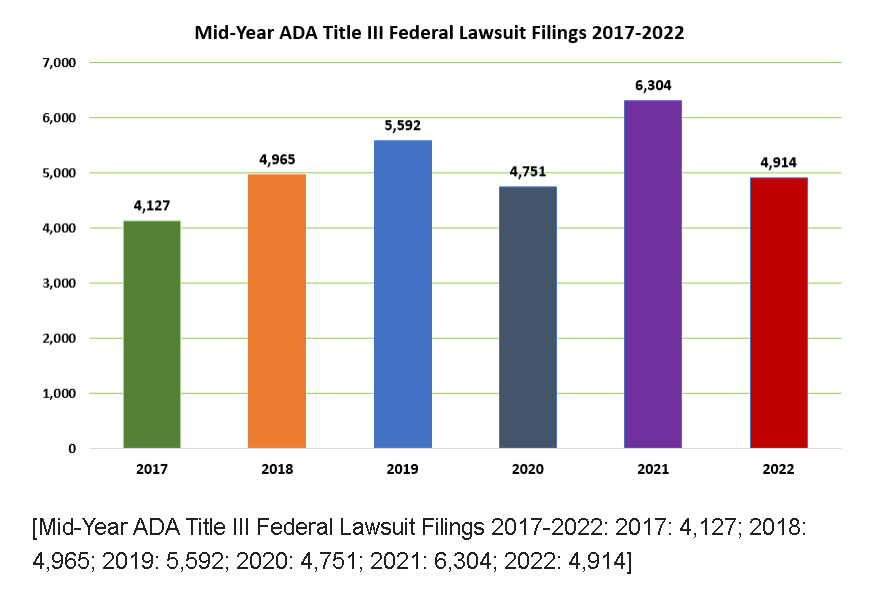 We couldn’t help but notice that the California numbers took a similar dive. Here’s a little history of the Golden State’s mid-year count: 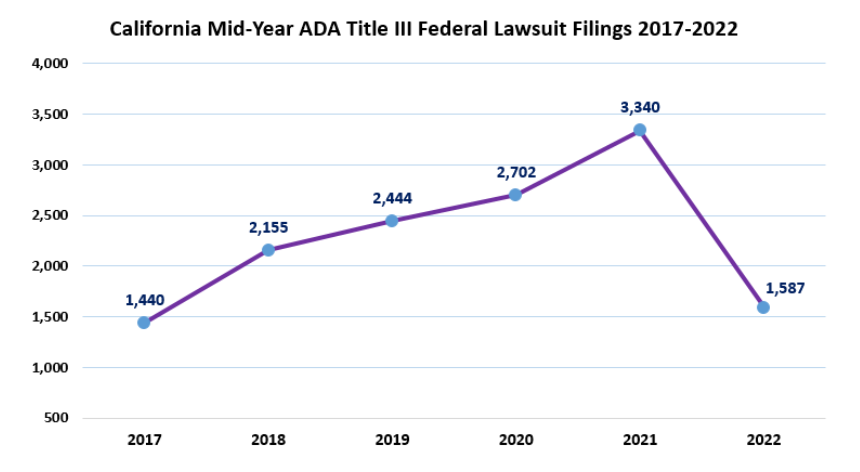 In 2022, there were 1,753 fewer federal filings in California compared to 2021, for a whopping 52 percent drop. What’s behind this radical change? One law firm which calls itself the Center for Disability Access (a/k/a Potter Handy) only filed 397 federal lawsuits in the first six months of 2022 as compared to 1,729 such suits for the same period in 2021. We have seen less activity from other California firms as well. One reason for the decrease could be the increased scrutiny on these accessibility lawsuits by law enforcement officials. For example, in April 2022, the Los Angeles and San Francisco District Attorneys filed a civil lawsuit against the Center for Disability Access alleging fraudulent conduct in connection with its lawsuit activities. And in May 2022, the San Francisco District Attorney lodged 18 felony charges against attorney Kousha Berokim who allegedly filed fraudulent accessibility lawsuits against San Francisco businesses. These actions may have had a chilling effect on the plaintiffs’ bar in California and elsewhere.

A close examination of the 2022 mid-year figures also reveals that – although California’s numbers were down by more than 52 percent – the national figures only fell by 22 percent. So which state is picking up the slack? Start spreading the news, it’s New York.

New York has had a substantial number of filings ever since we first started keeping these statistics in 2013. From 2013 to 2017, New York held third place, behind California and Florida. Then, in 2018, New York surged into second place thanks to several New York attorneys who filed hundreds of lawsuits a year about allegedly inaccessible websites and the lack of Braille gift cards. Now, for the very first time, New York has taken the number one spot for federal ADA Title III federal filings – at least for the first half of 2022. Here are the mid-year numbers of the five states with the highest number of filings: 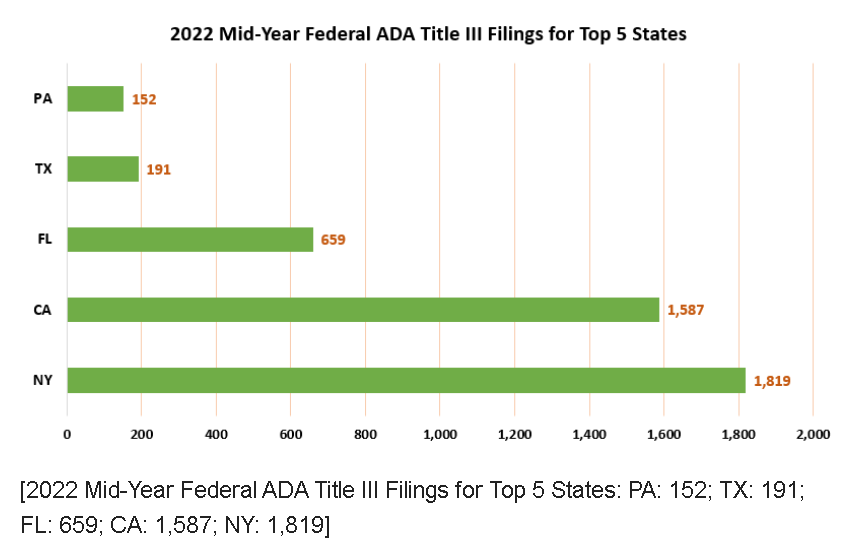 Will New York be the hottest jurisdiction for ADA Title III federal lawsuits at the end of the year? Or will California manage to regain its dominance? Stay tuned….

Our Methodology: Our overall ADA Title III lawsuit numbers come from the federal court’s docketing system, PACER. However, because the area of law code that covers ADA Title III cases also includes ADA Title II cases, our research department reviews the complaints to remove those cases from the count.