In an unprecedented historic action, the US Food and Drug Administration (FDA) and Oncologic Drugs Advisory Committee (ODAC) unanimously approved CTL019 (tisagenlecleucel) or Kymriah®, an investigational chimeric antigen receptor T cell (CAR-T) therapy. Kymriah® has been approved for its use in the treatment of relapsed or refractory B-cell acute lymphoblastic leukaemia in paediatric and young adult patients, making it the first approval of a CAR-T therapy for humans. Novartis Inc. in partnership with University of Pennsylvania (UPenn) had filed a patent application (WO 2016109410 A2) for this technology on December 28, 2015. It has a priority date of December 29, 2014, in the United States and Canada. The patent application primarily recites a method of making immune effector cells including T cells that can be engineered to express chimeric antigen receptors (CARs) on their surface.

In layman's terms, it involves reprogramming an individual’s immune cells to make them better at targeting diseased cells such as cancerous cells. This approval has made Novartis Inc. closer to potentially delivering the first-ever commercially approved CAR-T therapy, Kymriah®, to the patients in need.

Acute lymphoblastic leukaemia (ALL) is a type of cancer that occurs due to uncontrolled growth of white blood cells, particularly B cells, which overtake other types of cells in the bone marrow. The disease causes patients to become anaemic and prone to infections, and they bruise or bleed easily. ALL is the most common childhood cancer in the US. In India, it is the ninth most common cause of death among young children.

Chimeric Antigen Receptor (CAR) therapy is a kind of an adoptive cell therapy, which involves a combinatorial methodology that includes the aspects of cell therapy, gene therapy and immunotherapy methods. Cell therapy entails cellular material being injected into a patient that involve intact, living cells, for example, T cells capable of fighting cancer cells via cell-mediated immunity. Gene therapy is the delivery of nucleic acid polymers into a patient's cells as a drug to treat disease. Lastly, immunotherapy, also called biologic therapy, uses patient’s own immune system to repair, stimulate, or boost their natural immune response.

Technically, the CAR-T therapy involves the extraction of T cells from the individual patient, which are then genetically modified and expanded under in vitro conditions. The chimeric T cells are then re-infused into the patient, ready to fight the tumour by specifically targeting the antigens on the cancer cell surface that leads to mounting of an immune response and consequently, the cell death of the targeted cancer cell as represented in Figure 1. 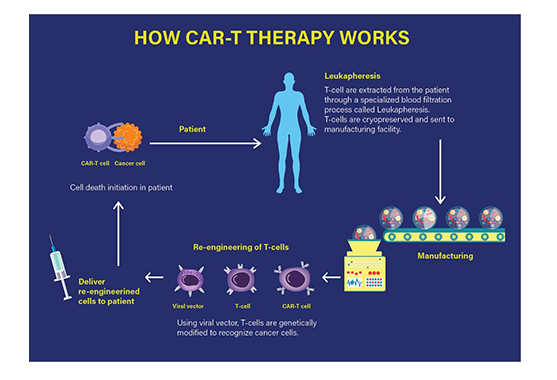 Specifically, a CAR-T therapy consists of the infusion of engineered T cells that express a chimeric antigenic receptor on their cell membrane. The CAR has an external (extracellular) target-binding domain, designed to recognize a specific tumour antigen; and an internal (cytosolic) activation domain responsible for activating the T cell. The CAR-T cell binds its target, such as cluster of differentiation (CD)-19. CD19 is one of the predetermined target antigens overexpressed on the surface of tumour cells such as B cells, in case of the patients with ALL. Coupling the T-cell receptor to a CD3ζ signalling domain paved the way for the first generation of CAR-T cells that were efficacious against CD19-expressing B-cell malignancies as investigated by the Novartis-UPenn partnership.

Novartis Inc. has a long history of being at the forefront of transformative cancer treatment. In 2012, Novartis Inc. partnered up with UPenn to propagate CAR-T therapies, including Kymriah®, the drug based on the CAR-T technology first developed by UPenn. Subsequently, other co-stimulatory domains have been included in the next generations of chimeric receptors to further enhance the immune response. The product approved and launched in partnership by Novartis Inc. is a one-time treatment for B-cell ALL. The remission rates have been reported as 83% after three months in clinical trials with patients, who did not respond to standard treatments.

Similar to cancer therapies, CAR-T clinical trials have reported severe side-effects in the treated patients, such as neurotoxicity, namely cerebral edema; and cytokine release syndrome (CRS). The Kymriah® trials also disclosed a strong cytokine release syndrome (CRS) in 49% of the treated patients. Additionally, a small percentage of CAR-T therapy treated patients have shown relapses due to antigen loss such as CD19 from the surface of the tumorigenic B cells. However, most of these modalities are being dealt with in a combinatorial treatment regimen. For complications with CRS, conventional co-therapies, such as Actemra®, a rheumatoid arthritis drug, which is an anti-IL6 receptor antibody, has been successfully employed. Another approach has been the implementation of additional targets for the CAR-T cells, for example, CAR-T cell mixtures targeting CD19 and CD22 respectively are infused in a combination therapy into the individual cancer patients. In addition to the FDA’s ODAC and subsequently, the FDA approval in August 2017, Kymriah® has also previously received PRIority MEdicines (PRIME) designation from the European Medicines Agency (EMA) in 2016.

Future looks bright and promising with this landmark approval that is going to change the treatment options in humans increasing survival in other recalcitrant diseases and decreasing morbidity. The advent of ground-breaking genetic engineering tools such as CRISPR/CAS9 system are adding to the capability and ease of transforming the individuals cells from patients, be it diseased or therapeutic cells. A paradigm shift is expected towards transformation to such adoptive cell therapies to supplement the reach of conventional surgical, chemo- and radio- therapeutic options along with the other advancements in medicine including the promising targeted therapies with small molecules and biologics.