Earlier this week, an Illinois federal judge allowed a class action lawsuit against the manufacturer of “TGI Friday’s Mozzarella Stick Snacks” to proceed – but restaurant chain TGI Friday’s was dismissed from the suit. The snacks, which allegedly do not contain actual mozzarella cheese, were marketed under the TGI Friday’s (TGIF) brand and manufactured by Inventure Foods, Inc.

Defendants’ rebutted that the product is a “shelf-stable, crunchy snack product,” which could therefore not feasibly contain mozzarella cheese. This “common sense” approach fails, according to the judge. The opinion states that at this stage of the litigation, plaintiff’s group has sufficiently alleged that a reasonable consumer would infer the snacks contain mozzarella cheese based on the item’s packaging.

Although the complaint alleged that TGIF and the manufacturer acted jointly in making the label’s mozzarella cheese representations, the judge determined that plaintiff failed to state a claim against TGIF -- since it was merely the trademark licensor. The court explained, "an allegation that a party has licensed its trademark to appear on a product is not, by itself, sufficient to state a claim for liability for misleading misrepresentations that appear on the product." 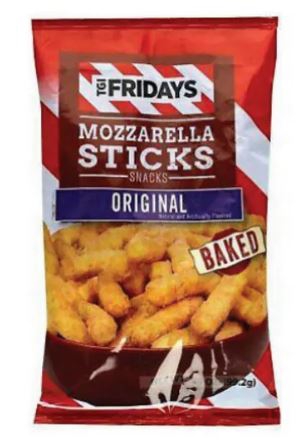