A Brief History of Virtual Reality, in Patents

Until recently, the idea of wearing a headset and becoming part of a virtual world seemed like something out of a science fiction movie. While modern day virtual reality and augmented reality use cases promise revolutionary undertakings in mobile applications, gaming, healthcare, retail, automotive, and enterprise industries, the technology has a long history that dates to the 1940s.

What is Virtual Reality?

Virtual reality (VR) describes a computer-generated three-dimensional environment that users can interact with. Users are placed inside an experience, stimulating multiple senses, such as vision, hearing, and touch. Virtual reality usually relies on headsets, which take over your vision to simulate the environment, replacing the real world with a virtual one. At the outset, most VR headsets connected to the game system via a cable and implemented motion tracking sensors to track user movement, thus enabling a 360-degree world. Newer standalone VR headsets connect to smartphones, eliminating the risk of tripping over a cable, but provide a less powerful experience because they are not enabled with the same motion sensors.

Simulation environments date back to the 1930s, with the View-Master, which was patented in 1940 (U.S. Patent No. 2,189,285), and is still in production today. The iconic red goggles have been a childhood diversion for decades. The View-Master was introduced in 1939 at the New York World’s Fair, intended as an alternative to the postcard. The View-Master’s reel holds 14 film transparencies in pairs, each of which compose a stereoscopic image. The pairs are viewed simultaneously, creating depth perception. The device was used by soldiers training during World War II and families who toured national parks from their living rooms. Today, the device works just as it did in 1939, creating an optical illusion through stereopsis. 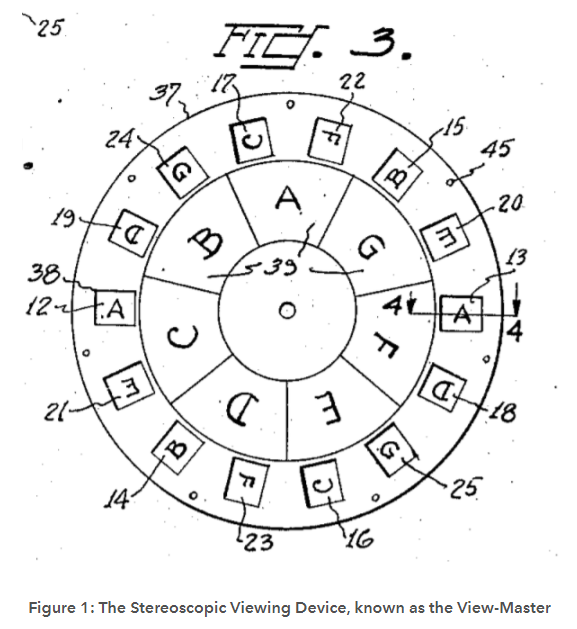 Following the View-Master, Morton Heilig lay the groundwork for virtual reality with two inventions. In 1957, he invented the Sensorama (U.S. Patent No. 3,050,870), which allowed people to experience a simulated city environment while sitting in a booth, complete with effects like feeling the wind in your hair, stereo sounds, and aromas of the city. The layers of sensory stimuli added to the virtual reality experience. The Sensorama had a seat for a single viewer, a set of handles, viewing holes, and a series of vents. The whole contraption was under a canopy, which limited distractions. Viewers watched the film through a set of ocular portals. While the Sensorama was designed for arcade use, it never had any takers for large commercial use. However, the Sensorama managed to include many layers of sensory stimulation that remain lacking in modern day virtual reality devices. 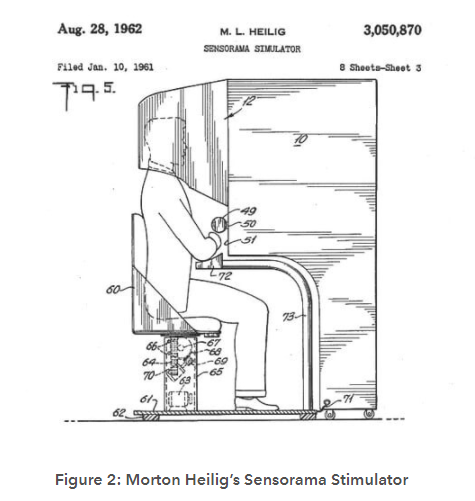 A few years later, Heilig patented the Telesphere Mask (U.S. Patent No. 2,955,156), which was the first head-mounted virtual reality display. Heilig described the device as a “stereoscopic television apparatus for individual use.” The Telesphere looks eerily similar to modern-day equivalents, except that it used miniaturized TV tubes instead of connecting to a gaming system or smartphone. The patent states that “the spectator is given a complete sensation of reality, i.e. moving three dimensional images which may be in colour, with 100% peripheral vision, binaural sound, scents, and air breezes.” The Telesphere was light enough to wear, with adjustable ear and eye fixings, a feat which some head-mounted displays today fail to do. The Telesphere was another commercial failure but was way ahead of its time. 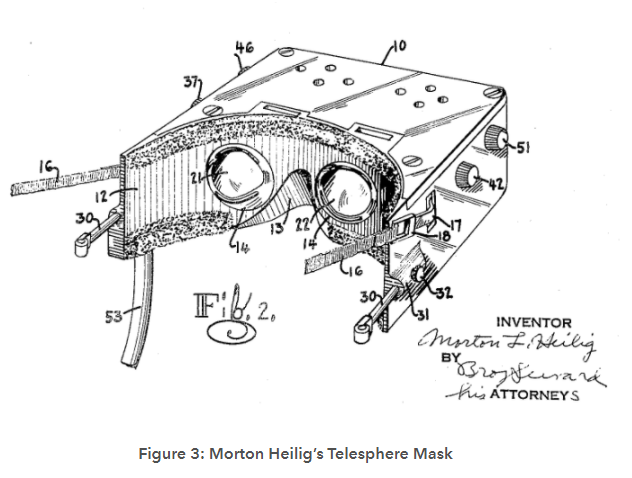 In 1965, Ivan Sutherland wrote a paper describing the “Ultimate Display,” conceptualizing the idea that a user would wear a device that would blend simulated reality with actual reality so a user could not tell the difference. He envisioned a head-mounted display that connected to a stereoscopic display, changing perspective as a user moved. While the display never amounted to more than a laboratory project because of its weight, it became a blueprint for conceptualizing virtual reality.

While plenty of development was happening around headsets, Daniel Sandin and Thomas DeFanti were the first to invent finger tracking gloves, known as “Sayre” gloves, in 1982. The gloves marked the beginning of gesture recognition, using light-based sensors to provide a measure of finger movement. Flexible tubes with a light source at one end were mounted along each of the fingers of the glove. As each tube was bent, the amount of light decreased.

Shortly after, VPL Research was founded, where virtual reality pioneer Jaron Lanier would go on to coin the term virtual reality. VPL Research was the first company to sell VR gloves, filing an application for the DataGlove (U.S. Patent No. 4,542,291), which captured hand movements using wearable technology. The DataGlove was an improvement on previous gloves because it operated in real time and monitored all 10 finger joints as well as hand position and orientation. The DataGlove is made of lightweight Lyera with optical fibers along the backs of the fingers. The signal strength of the fibers sends a signal to a processor that determines joint angles based on pre-calibrations for a user. The DataGlove is optimal for general hand tracking and simple gestures but lacks the accuracy to compute complex gestures. 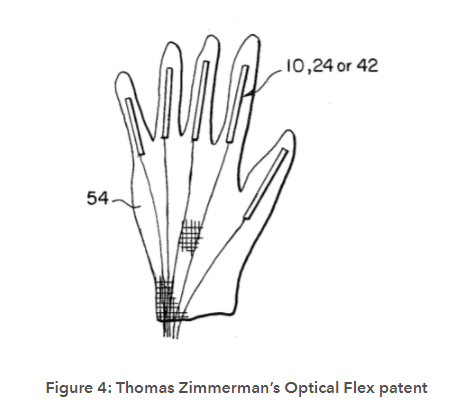 By the late 1980s, NASA became a player in the virtual reality space. In 1989, NASA developed Project VIEW, a virtual reality simulation used to train astronauts. The system was a head-mounted display that generated an artificial environment that allowed users to interact with it. The system also incorporated the DataGlove technology, generating an image of a hand that moved as the user moved his or her hand.

Google made another breakthrough when it introduced Street View in 2007, allowing people to immerse themselves anywhere, from their own neighborhoods to wonders of the world.

Today, there are many companies developing virtual technology. One of the most exciting innovations was the Oculus Rift, created by Palmer Lucky. The Oculus Rift is an immersive virtual reality headset that was acquired by Facebook in 2014. It differed from other products on the market because it is a standalone product that only needs to be paired with a computer. The Oculus Rift has a set of lenses that create a stereostopic 3D image so that each eye sees everything from a slightly different vantage point, creating the optical illusion of depth. The Oculus Rift is embedded with sensors that monitor the user’s head motions to adjust the image and has external sensors to track head movement more accurately. A dial within the headset also allows users to adjust the lenses to suit their face. The Oculus Rift is protected by both utility (U.S. Patent No. 9,063,330) and design (U.S. Patent No. D749,583) patents. 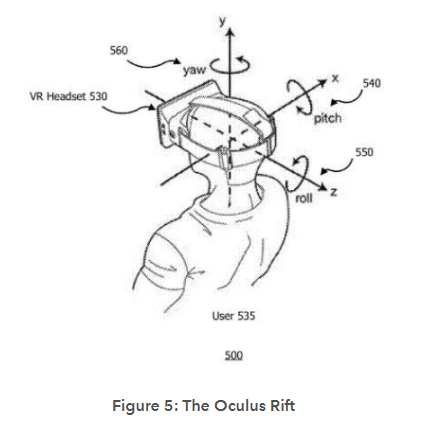 In 2016, Microsoft debuted the HoloLens, which like the Oculus Rift, boasted standalone technology through a head mounted device. However, a new patent published in early 2019 outlines glasses that are a miniature version of the original HoloLens device, known as the HoloLens 2. The glasses display digital content through holograms and allow users to interact with that content overlaid on the real world. Until June 2020, only business partners and developers could purchase the HoloLens 2. Now, sales are open to the public.

Unlike the Oculus Rift, the HoloLens is untethered and does not need to communicate with your phone to project holograms into your environment. The entire unit is self-contained. The HoloLens 2 also understands voice commands using smart microphones and natural language speech processing. Users can reach out to touch and interact with the holograms. The HoloLens 2 is also designed for ease of fit, made from a light carbon material, with a dial mechanism that users can control to fit their heads. 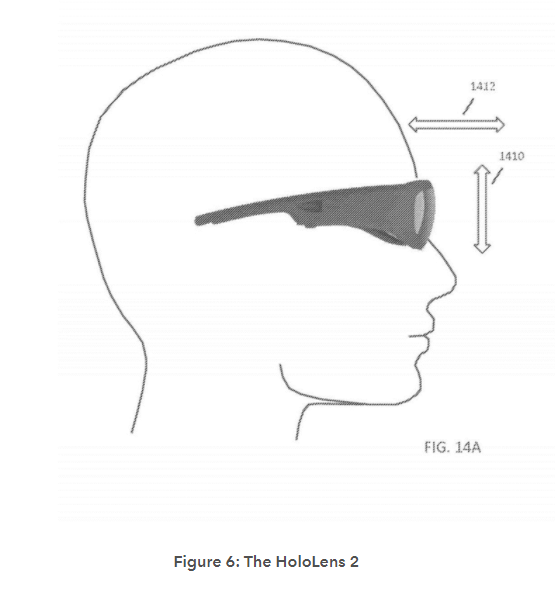 The number of patents filed in this space continues to grow, so the next decade holds promise for what modern day virtual reality technology will look like.

What Does the Future Hold?

By now, virtual reality is part of the mainstream, with many large players working on their own technology, including Google, Apple, Amazon, and Sony. While gaming and entertainment remain the largest consumer space, the past few years marked an uptick in virtual reality development in healthcare and education. The possibilities are endless as hardware improves to make it more comfortable and less encumbering for a better user experience. Software developments mean more realistic virtual environments.

In some instances, virtual reality makes life easier. For example, retailers use it for better product placement in stores. Impressive breakthroughs are seen in the healthcare sector, where systems simulate essential organs, allowing people to practice surgical procedures.

There is plenty of potential for growth in virtual reality and as large companies continue to invest, only time will tell what will come next.