In the guise of clarifications relating to criminal convictions and misconduct, the Department of Labor (DOL) has proposed major amendments to Prohibited Transaction Exemption (PTE) 84-14, also known as the QPAM exemption (the Proposal). If adopted in its current form, the Proposal would come dangerously close to a revocation of the exemption by excluding any transactions “planned, negotiated or initiated …in whole or part” by any party-in-interest. In addition, the Proposal would obligate QPAMs to enter into written contractual provisions that would expose a QPAM to such extensive liability that many may no longer be able to afford to service plans. And this provision would require every investment contract referencing the QPAM exemption to be rewritten within 60 days of the publication of the final exemption.

The QPAM exemption has always required that the transaction be negotiated by or under the direction of the QPAM and that the QPAM be the decision maker. The Proposal goes far beyond that and would exclude any transaction “planned, negotiated, or initiated by a party-in-interest.” If read literally, many common and beneficial investment arrangements would no longer be permissible. Investment structures will need to be unwound and restructured at high costs, with no discernable beneficial effect on investing plans. For example:

It is unclear why it should matter if a party-in-interest proposes or initiates a transaction, as long as the approval and terms of the transaction are the ultimate responsibility of a QPAM. It is common for plans and their fiduciaries to be presented with or to identify investment opportunities, but to rely on the QPAM to use its independent judgement in approving the specific transaction. Moreover, there is no explanation as to the extent to which Investment Funds, a defined term, will be considered to have been established “primarily for investment purposes.” The definition of Investment Fund includes, among other things, “any . . . account or fund to the extent that the disposition of its assets (whether or not in the custody of the QPAM) is subject to the discretionary authority of the QPAM.” If the distinction is meant to be one of intent, this would create uncertainty as to what transactions are “covered transactions” for the exemption, which should be one of the most, if not the most, clear-cut part of any exemption.

DOL explains that the purpose of the foreign affiliate conviction requirement is because “[a]n ineligibility provision that is limited to US federal and state convictions would ignore these realities and provide insufficient protection for Plans investing through a QPAM’s international affiliates.” That reasoning may be sound but it does not explain why the conviction of a foreign affiliate that is completely disconnected from the plan and the QPAM should have the same result. While this is not a new development, the addition of a retrospective rule in this regard highlights the difficulties inherent with this position.

The retroactivity aspect could prove particularly difficult and disruptive in practice with corporate restructurings at a global level. Corporate restructuring and acquisitions often result in new affiliates joining the group that is aggregated for the 5% control affiliate definition of the exemption, and as a result, managers may unexpectedly lose their QPAM status. In such situations, the QPAM may not even be aware of old convictions involving new affiliates of the enterprise. The same is true with regard to an acquired QPAM’s old enterprise. Will a conviction occurring within the enterprise after the QPAM has left the group, but based on activity while the QPAM was part of the group, taint reliance? 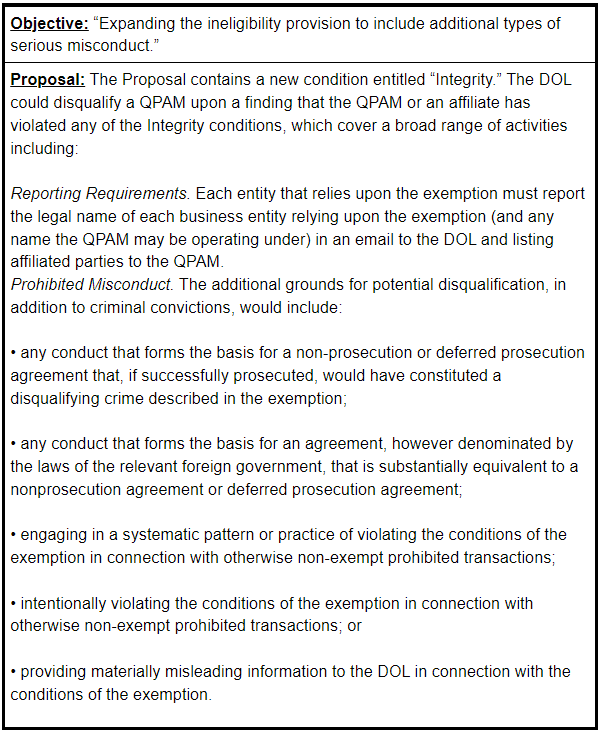 The one time e-mail notice to the DOL is a foot fault waiting to happen – old arrangements will be overlooked, new entities will be created, old entities will be renamed or establish new operating names. The cost assumption that this is a one-time 15-minute activity seems to drastically understate the true cost. The DOL has not articulated any evidence that the prior absence of such a requirement has been problematic. The DOL provides no evidence of the need for or the utility of a published list. Reliance on QPAM is routinely documented in agreements among parties that need to rely on the PTE.

Disqualification upon the occurrence of perceived bad behavior is similar to a provision in PTE 2020-02 covering fiduciary investment advice. While there is some due process contemplated, the preamble notes that the DOL “intends to rely on its enforcement authority and program to detect a QPAM’s participation in disqualifying types of misconduct.” Nonetheless, the possibility of field office examination activity that seeks to disqualify a QPAM, with the potential catastrophic results on the QPAM’s business and potentially the plans they service, is extraordinary. This is particularly true because it includes misconduct of 5% control affiliates.

If the DOL is going to reopen the QPAM Exemption in this manner, it is time to reconsider whether misconduct by affiliates justifies ineligibility, given the track record. Misconduct by the QPAM itself is clearly material; misconduct by foreign or even domestic affiliates has not infected the integrity of QPAMs, based on the public record. The DOL has presented no evidence that the governance/compliance/cultural failure at a remote affiliate leading to a criminal conviction means that the entire enterprise suffers from the same failure. If DOL insists on retaining the affiliate rule, modifications could be made that are protective of plans while avoiding unnecessary consequences and disruptions. 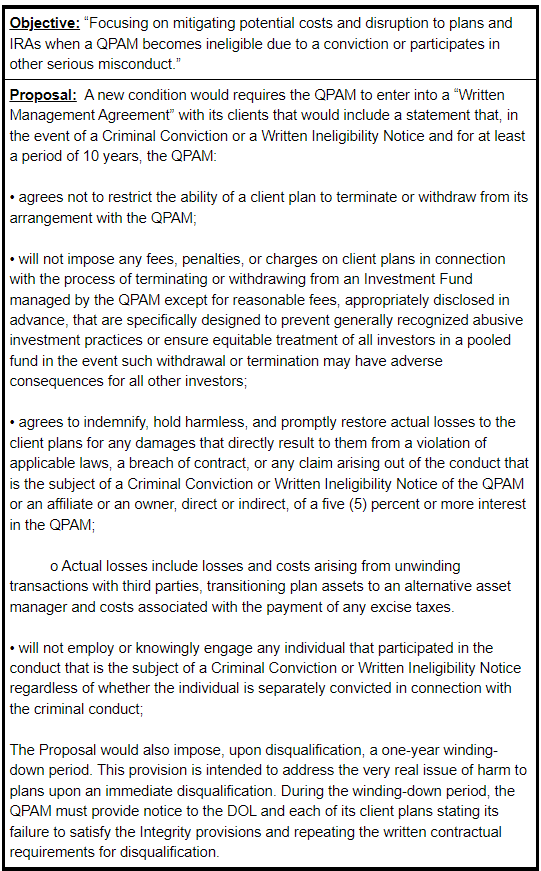 Plan administrators, trustees and investment committees should take heed that every investment management agreement would have to be re-negotiated and amended within 60 days of the date the final exemption is published in the Federal Register. DOL grossly underestimates the costs of rewriting 40 years of investment contracts. QPAM is a standard provision in virtually every investment management agreement and is included in, for example, ISDM master agreements for derivatives transactions, cleared swap documents, credit facilities and numerous other agreements with hundreds of thousands of plans.

For managers, mandatory contractual provisions that would require QPAMs to pick up all costs of unwinding investment transactions is unprecedented in its punitive nature and has the potential to literally put managers out of business. The DOL estimates that it is conceivable that up to “100 million” dollars in assets might be transferred as a result of these provisions. If this is a realistic estimate for a single QPAM, at the very least it could cause disruptions to a business, considering the QPAM would also be responsible for the transaction costs of such transfers. There can be no justification for such a result, when considering that disqualification can occur because of behavior of a single individual with no real connection to the QPAM. With this much exposure on the line, many providers simply will not be able to afford to take on this level of risk and the QPAM exemption may no longer be a viable solution.

DOL may perceive an exodus of QPAMs from the retirement plan investment marketplace as a neutral factor, but in reality should this occur, it is the plans and participants that will surely be harmed. Plan fiduciaries will have to take the time to, among other things, find new managers and replace investment funds. This activity will take time away from focusing on investment decisions, potentially during a volatile market.

The Proposal is also seriously problematic in its requirement that a QPAM not employ anyone “participating in” prohibited misconduct. While active participation in prohibited misconduct might be grounds for termination of employment, the exemption provides that “participating in” refers not only to active participation in the prohibited misconduct, but also to knowing approval of the conduct, or knowledge of such conduct without taking active steps to prohibit such conduct, including reporting the conduct to the appropriate compliance personnel. Presumably the QPAM is expected to fire any individuals who have any knowledge of misconduct. Remember, however, that this restriction applies throughout an entire enterprise. The QPAM is unlikely to have the authority to take such employment action with respect to affiliates. Moreover, the QPAM may be legally restricted from taking such action under, e.g., collective bargaining agreements and foreign employment laws. 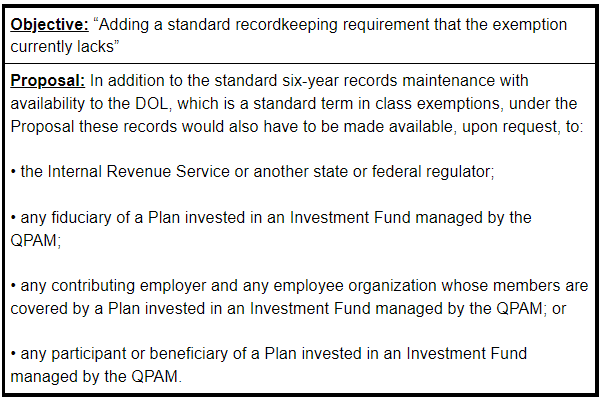 The DOL certainly is entitled to access records pertaining to the exemption, but extending that availability to the public, without the protections available under the Freedom of Information Act, has the potential to open up a Pandora’s box. While certain exceptions are made for privileged trade secrets, privileged commercial or financial information, or information identifying other individuals, in order to rely on these exceptions, within 30 days of the request the QPAM must provide a written notice advising the requestor of the reasons for the refusal and that the DOL may request such information by the close of the thirtieth (30th) day following the request. It is unclear whether this means that the DOL believes it has the authority to access privileged and confidential information, and if so, will be obligated to protect that information from public disclosure. For large organizations in particular, the 30-day window is an extremely short timeframe and coordinating responses could take time away from important investment management duties.

As is the case with many other provisions of the Proposal, this provision is problematic because it does not provide relief for existing arrangements with current managers. There are bound to be QPAMs that fall within the window between the old requirements and the updated ones. A similar situation arises with the cost-of-living adjustments. In both situations, a plan might find itself losing out on a trusted manager or beneficial investment fund on very short notice.