Enforcement action is no longer fanciful. Facing up to modern slavery risks, be those operational, legal or reputational, is inescapable.

The torches are brighter…

Modern slavery is not going away. COVID-19 has shone light on how employers treat their workforce. The inevitable glut of labour resulting from increased redundancy rates renders those at the murky end of long supply chains more vulnerable to human exploitation than ever before.

"Few corporate household names are entirely unconnected to the facilitation of human exploitation."

Simultaneously, institutions of every kind are facing unprecedented scrutiny to demonstrate not only compliance with the highest ethical business standards but also active support for the same. All this in the midst of a global economic downturn, during which the idea of cheap labour might previously have been regarded as a viable ingredient in the recipe for prosperity. The Australian Strategic Policy Institute’s March 2020 Policy Brief, which implicated the illegal mistreatment of Uyghur Muslims in China by 83 major brands, is just one example of today’s common realisation that few corporate household names are entirely unconnected to the facilitation of human exploitation.

…and the risks are bigger

Laws and regulations holding commercial institutions liable for human rights breaches are steadily emerging from parliamentary bodies around the globe. With this expanding legislative framework grows the risk of breaches of commercial contracts, as common obligations to comply with ”all applicable laws”, “industry standards”, and even “all internal policies” become more meaningful. Though the risk is greater to those bound to anti-modern slavery provisions (now commonplace), there is no reason why courts would exclude human rights legislation from clauses intended as a catch all.

Money laundering is also a genuine risk, as evidenced by the recent independent review of the Boohoo Group’s supply chain. Under UK legislation, even being knowingly concerned with someone deploying the proceeds of crime could constitute a criminal offence. Corporates that become aware of modern slavery in their supply chains and fail to act may, therefore, be said to be benefitting from criminal property and be guilty of money laundering. The fact that the crime, wherever it takes place, is judged by UK standards renders the risk all the more serious.

That is not to mention the potential reputational damage at stake. Businesses are built on trust. Trust depends not only on excellence and reliability, but increasingly on transparency, from which healthy investment naturally follows. True transparency is only enabled by rigorous due diligence and positive action, wherever necessary.

"The risk is real, ever-increasing, and merits diligent attention by every commercial organisation."

If predictions that sustainable investment products will outnumber conventional funds by 2025 hold true, those who remain reluctant to be fully transparent because of failure to adequately address modern slavery risks could find themselves short of funds. By contrast, companies that are willing to tackle the issue head-on and embrace the opportunities it presents can seize the chance to emerge as market leaders in an increasingly visible area.

"Those who remain reluctant to be fully transparent because of failure to adequately address modern slavery risks could find themselves short of funds."

Why is this relevant for financial institutions?

The treatment of human beings as capital assets is estimated to pump a staggering USD 150 billion through global economies every year.2 Financial institutions, who facilitate the flow of these funds, are by no means shielded from the risks that accompany them. 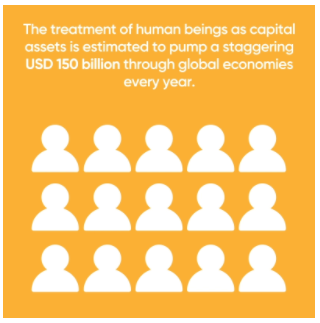 Be it an institutional investor owning a stake in a business profiting from forced labour, an underwriter covering the risk of a fishing vessel harbouring the same, or simply a retail bank offering cash management services to human traffickers, financial institutions cannot afford to be apathetic to the legal and reputational risks outlined above, nor can they conveniently excuse themselves from the problem. Instead, those seeking to build resilience in 2021 and beyond will implement appropriate measures to safeguard against investing in, underwriting, or loaning capital to businesses dependent on an illegal activity that is becoming more and more regularly exposed.