On November 29, 2018, the Government of Ontario released its Plan, “Preserving and Protecting our Environment for Future Generations: A Made-in-Ontario Environment Plan” (the Plan).[1] The Plan provides Ontario’s response to the federal government’s carbon pricing backstop and touches on multiple environmental issues, including water pollution, greenspace, waste management and litter. This article will focus those parts of the Plan that address greenhouse gas (GHG) emissions and other types of air pollution. We have also prepared a companion article that focuses on the implications of the Plan for waste management in Ontario.

The Plan is a very high level document. It does not provide details on any new laws, regulations or policies. What the Plan does do is provide an overview of where the Government of Ontario is heading in respect of the environment, setting out its priorities and the ways in which it plans to approach environmental issues. With respect to climate change, the Plan reflects the previous political messaging - that Ontario will not put a price on carbon. For GHG emissions, the Plan will try implement measures to allow Ontario to achieve a target reduction in GHGs consistent with Canada's obligations under the Paris Agreement.

Ontario's approach to meet that target can be summed up as follows:

In addition to climate change mitigation strategies, the Plan also recognizes the importance of climate change adaptation and resiliency, in keeping with the prior government's plans in this regard.

The Cap and Trade Cancellation Act, 2018 required Ontario to 1) prepare a climate change plan; and 2) set a target for reducing GHG emissions.[3] The Made-in-Ontario Plan fulfils both requirements and aims to reduce Ontario's GHG emissions by 30% below 2005 levels by 2030.[4]

The target aligns with Canada's 2030 target under the Paris Agreement.[5] The Paris Agreement, however, is considered to be a relatively low threshold for international climate action. It was expected that achievement of its targets would only keep global temperature rises to below 2 degrees Celsius above[6] pre-industrial levels – enough to avoid the most devastating effects of climate change, but not mitigate all of the negative effects associated with a warming world.[7] Previously, Ontario had set a higher target of 37% below 2005 levels by 2030.[8]

The Strategy: More carrots, fewer sticks and a dash of sunlight

The figure below sets out the proposed strategies and their anticipated contribution to achieving the Ontario GHG emissions target. The subsections that follow explore in greater detail the "carrots", "sticks" and "sunlight" that form part of the Made-in-Ontario Plan. 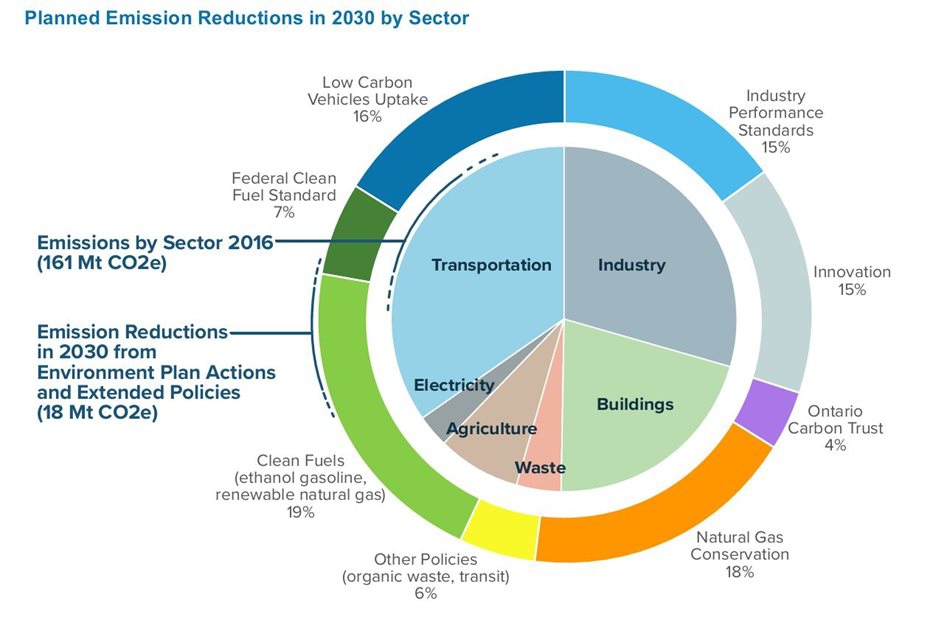 Ontario anticipates that 15% of Ontario's emissions reduction will come from the establishment of an emissions performance standard. Under this system, large emitters of GHGs would be required to reduce emissions based on their level of output or production.[10] Each large industrial emitter would be required to demonstrate compliance on a regular basis. If an emitter cannot achieve the standard, there will be "compliance flexibility mechanisms", whereby an emitter may submit carbon offset credits or pay a certain amount to achieve compliance.[11]

Interestingly, the federal government's Greenhouse Gas Pollution Pricing Act[13] (the federal backstop) also includes an output-based pricing system which follows the same general principles. It is unknown as to the extent to which the Ontario Plan would differ from the federal backstop, and whether it could eventually comply with the federal requirements. However, Ontario has already missed the deadline to establish its own federally-compliant system, and Ontario has challenged the federal backstop in court.[14] Under the federal regime, output-based standards are anticipated to be set at 80% of an industrial sector's average GHG emissions intensity for most industries. [15] An exception will apply to the cement, iron and steel, lime and nitrogen fertilizer sectors, which will have a less challenging standard of 90% of the sector's average GHG emissions intensity.[16] For more detail on the federal government's output-based pricing system, see our October 9, 2018 article: "Ontario's Cap and Trade Program Ends and Federal Backstop Looms: Implications for Ontario Businesses".

Other than industry performance standards, Ontario may also impose higher renewable fuel standards in the longer-term. Ontario currently requires that gasoline contain 5% ethanol, a renewable fuel produced mainly through the fermentation of corn and wheat.[17] The Plan envisions that the ethanol content of gasoline could be increased to 15% as early as 2025, reducing GHG emissions further.[18]

Finally, the Plan intends to reduce air pollution emissions generally by redesigning the emissions testing program for heavy-duty vehicles, such as commercial transport trucks, and by strengthening on-road enforcement of emissions standards.[19] This will have implications for many air pollutants, including GHG emissions.

The Plan also has various strategies that are intended to promote private investment in clean technology.

The most concrete way the Government will support clean tech is by creating a new funding pool called the Ontario Carbon Trust. In total the program would devote $400 million over four years. $350 million would be used to create an emission reduction fund to support GHG reduction emissions. The remaining $50 million would be used to fund a "Reverse Auction", allowing bidders to send the Government proposals for emissions reduction projects and compete for contracts based on the bidder who can reduce emissions for the lowest cost.

Green Bonds, government bonds meant to fund projects with environmental or climate benefits, may also be on the horizon. The Government states that it will work with the Ontario Financing Authority to issue Green Bonds to allow Ontario to raise funds for "green" projects by the end of the fiscal year.[20]

Apart from funding, the Plan proposes to modify the Ontario tax regime to favour clean tech. Consistent with the previous Liberal government's plans,[21] Ontario will follow federal changes to the Accelerated Capital Cost Allowance,[22] which will support technology investments in clean energy generation and energy conservation equipment by allowing businesses to defer income to later years where they make these investments.

A final component of the Plan aims to shine light on the environmental practices of companies. Ontario intends to work with the financial sector to promote disclosure of not only typical financial information, but also climate change related information. Ontario also wishes to encourage the Ontario Securities Commission to improve guidance on climate-related disclosures, so that investors can better understand the climate impacts (and associated risks) of public companies.[23]

Finally, the Plan recognizes that the effects of climate change are already being felt in Ontario, and are likely to worsen in the future. As a result, the Plan outlines strategies to increase the resiliency of both public infrastructure and personal property, in collaboration with municipalities and developers, among other stakeholders. These strategies do not represent a significant divergence from the previous government's strategy on climate change resiliency. The strategies include:

The Made-in-Ontario Plan moves away from carbon pricing and seeks to reduce the regulatory burden on industry. The Government of Ontario has set a target in line with international agreements and has begun thinking about how to tackle that target in the absence of a cap and trade system or carbon tax. The details are yet to come, but the Plan is a signal about where the Government is going. It's a Plan that focuses on the carrots, has fewer sticks and shines a bit of light on the environmental practices of public companies.

The Plan is being made available for comment. Comments can be submitted up to January 28, 2019 by visiting the Environmental Bill of Rights website.