The Home Office has today released details of the proposed new Points-Based Immigration System (“PBS”) that will be introduced when free movement of workers from the European Union ends on 31 December 2020.

From then on there will be a single immigration system for all EU and Non-EU citizens.

The Policy Statement sets out details of the initial phase of this new PBS which focuses on “simple, effective and flexible arrangements for skilled workers from around the world to come to the UK through an employer-led system”.

Skilled workers will still need a job offer, English language skills and to be working at or above a certain skill level, which will be reduced from Level 6 (degree) to Level 3 (A-level).

There will still be a minimum salary required for a work visa. The minimum salary threshold has been reduced to £25,600 But it will no longer be the absolute minimum: some workers earning between £20,480 and £25,600 will still be able to get a visa, but only if they are highly qualified or working in jobs in a shortage occupation. The table below shows how this would work: 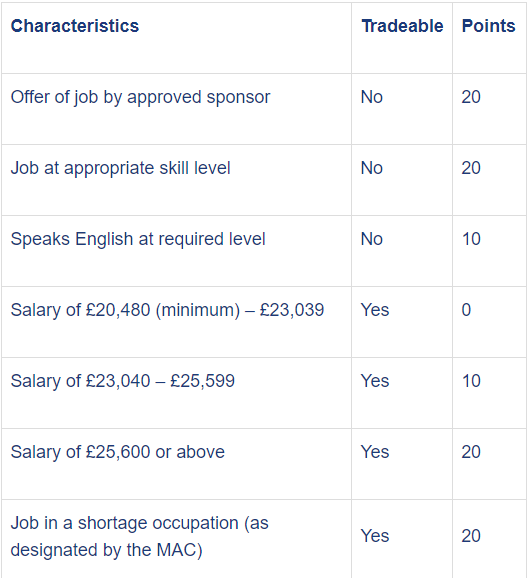 A total of 70 points is required to be eligible to apply; some characteristics are tradable.

The Home Office will publish further detail in due course, including detailed guidance regarding the points tables, shortage occupations and qualifications. As now, skilled workers will be able to be accompanied by their dependants.

The minimum salary threshold for new entrants to the labour market will be 30% lower than the rate for experienced workers in any occupation – quite how this will interact with the absolute minimum of £20,480 remains to be seen.

Importantly, the resident labour market test is being abolished. Whether this, when taken together with the lowering of the skills level to Level 3, will open the door to abuse remains to be seen.

The scheme will be implemented from January 2021. This is just the first stage in the plans for a points-based system. The Home Office will continue to refine the system in the light of experience and will consider adding further flexibility into the system including additional attributes that can be ‘traded’ against a lower salary. For example, this might include a greater range of qualification levels or other factors such as age or experience studying in the UK. However, they say that they will “need to guard against making the system too complex”.

There will not be a general low-skilled or temporary work route. The government states that “we need to shift the focus of our economy away from a reliance on cheap labour from Europe and instead concentrate on investment in technology and automation”.

Quite how the care, health, hospitality and transport sectors (to name a few) will be able to replace low skilled workers with apps and robots remains to be seen.

The fact that there has been a near unanimous uproar from a number of sector representative bodies (including for example Unison, CBI, British Chambers of Commerce, Institute of Directors, Royal College of Nursing, Food and Drink Federation, UK Homecare Association, GMB, British Meat Processors Association, Freight Transport Federation) suggests that this policy will be sailing into stormy waters.

For the time being, until employers have “invested in staff retention, productivity, and wider investment in technology and automation”, the Home Office say that the existing pool of EU citizens who have registered under the EU Settlement Scheme and are able to stay and work after 31 December 2020, will “provide employers with flexibility to meet labour market demands”.

For the agriculture sector the Home Office are expanding the quota under the pilot scheme for seasonal workers four-fold to 10,000. But no such quota for the care or food processing sectors.

In addition to the recently introduced Global Talent visa (which is not a points-based category) the government proposes to introduce a broader unsponsored route to run alongside the employer-led system. This will allow a smaller number of the most highly skilled workers to come to the UK without a job offer. The route will be capped and will be carefully monitored during the implementation phase, to avoid a repeat of the perceived failure of the Highly Skilled Migrant Programme (later known as the Tier 1 (General) visa route and ironically the only truly points based visa route under the entire existing points based system) to attract the “right sort of migrant”.

Students will be covered by the new PBS.

Under the current immigration rules, there are a range of other immigration routes for specialist occupations, including innovators, ministers of religion, sportspeople and to support the arts. The government’s broad approach for January 2021 will be to open existing routes that already apply to non-EU citizens, to EU citizens (the current ‘Tier 5’).

The future system will also deliver on ‘Mode 4’ commitments for temporary service suppliers, in line with existing and future trade agreements, such as the General Agreement on Trade in Services (”GATS”). Individuals will achieve the required points if they meet the requirements for the specific routes.

The Home Office will not be creating a dedicated route for self-employed people. They recognise that there are several professions where there is a heavy reliance on freelance workers and say that they will continue to be able to enter the UK under the innovator route and will in due course be able to benefit from the proposed unsponsored route.

It would seem that the government intends to keep the UK’s existing rules that permit artists, entertainers and musicians to perform at events and take part in competitions and auditions for up to six months. Under these rules they can receive payment for appearances at certain festivals or for up to a month for a specific engagement, without the need for formal sponsorship or a work visa.

What is noticeable by its absence is detail. The Home Office state that they will publish further detail on the new points-based system in due course, including detailed guidance regarding the points tables, shortage occupations and qualifications. However, it will be a massive task to complete this exercise in time for 1 January 2021, especially as they intend to begin a programme of engagement in March 2020 to raise awareness of the new system. This will focus upon those sectors most impacted including small and medium sized enterprises. They will also “work closely with stakeholders to understand their views on the implementation of the points-based system”.