SAFE instruments for Hong Kong venture capital investing - what are they, and when should you use them?

The simple agreement for future equity (SAFE) instrument has become a popular tool for making early-stage financings in the United States (arguably, more popular than convertible bonds), but the uptake of similar instruments in Hong Kong has been relatively slow. In essence, a SAFE instrument involves making an up-front investment, with a future conversion into equity at a valuation to be determined at that time based upon the occurrence of a future funding round, which can incorporate an optional conversion cap and/or conversion discount. Unlike a convertible bond, it is not a debt prior to conversion and it has no maturity date.

With the increasing attention paid to start-ups (particularly ‘unicorns’) in the Asia-Pacific region, a SAFE-like instrument can be a useful addition to the early-stage investor’s toolbox, especially where the start-up investee is very difficult to value, or where bridge financings which are small relative to the proposed next round financing are contemplated.

In the United States, the earliest stages of financing a company are usually done with convertible instruments such as a convertible bond or simple agreement for future equity (SAFE), with fixed price equity issues1 occurring on a less frequent basis.

AngelList (a platform for start-ups which, among other things, compiles data regarding angel investments in the United States) tracked individual investments made through its network which (a) utilised convertible instruments (including SAFE instruments) with a valuation cap under US$20 million, and (b) were made before any fixed price equity financing round (which serves to isolate ‘bridge rounds’ between fixed price equity financing rounds), and the following results illustrate an increasing use of SAFE instruments since their introduction in 2013: 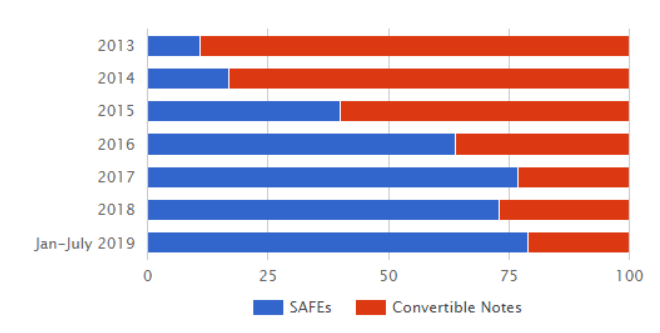 In Hong Kong, while convertible bonds and fixed price equity issues are often utilised in the fundraising context, SAFE instruments have not been widely applied in venture capital financings even though it is a concept of which venture capitalists in Hong Kong are generally aware, perhaps because SAFE instruments are generally not well understood in a practical sense.

In light of the above, this article seeks to explain the nature of a SAFE instrument, provides a comparison of its key features compared to a convertible bond, sets out some of its key advantages and disadvantages, and describes some circumstances in which it is suitable to be used.

What is a SAFE instrument?

A SAFE instrument is a relatively new tool used in early-stage venture capital financing, having first been introduced by YCombinator (a well-known ‘start-up accelerator’ in the United States) in 2013. It was developed as a more issuer- and user-friendly alternative to the convertible bond. Whilst others have developed similar documents under various names (e.g., Keep it Simple Security or ‘KISS’), we will refer to such instrument in this article as a ‘SAFE instrument’ (and the YCombinator SAFE instrument as a ‘traditional SAFE instrument’).

In essence, a traditional SAFE instrument involves making an advance subscription payment for equity to be issued at a later date upon the occurrence of a future equity financing round, or with a cash-out at the time of a sale of the issuer or an initial public offering (IPO) of the issuer. Upon the occurrence of such triggering event, the advance subscription payment is converted into equity, or is cashed out, at a price determined based on the valuation of the issuer under that triggering event. The conversion price is an effective share issue price – the higher the price, the fewer the number of shares to be issued to the SAFE investor. Any valuation cap acts like a floor on the number of shares which can be issued, or on the amount of the cash-out.

As the YCombinator SAFE instrument is subject to Californian law and is drafted in the U.S. style, it requires significant adaption before it can be applied in Hong Kong (and there is no local ‘standard form’ which is widely used in Hong Kong).

A convertible bond in an early-stage venture capital context

A convertible bond is also commonly used in early-stage venture capital financing. Typical characteristics of such instruments include (a) an up-front investment subscription amount being paid, (b) a future conversion into equity occurring on certain triggering events such as a future financing round, or a sale or IPO of the issuer, (c) a future conversion price tied to the relevant conversion triggering event (and often with a fixed discount applied to that conversion price), (d) a fixed maturity date on which the convertible bond will be repayable as debt of the issuer if any such conversion triggering event has not occurred prior to such maturity date, and (e) interest being payable on the investment amount (which is usually rolled up into equity at the time of conversion into equity). However, there is no widely used ‘standard form’ convertible bond in Hong Kong so its features and form may vary considerably.

A SAFE instrument shares a number of similarities with a convertible bond that is used in early-stage financings, including that (a) an investment amount is paid up-front in return for future equity, (b) the conversion price is not known at the time of investment (as it is based on an issuer valuation under the future triggering event), (c) a discount to that future conversion price is commonly applied, and (d) on a liquidation of the issuer, there is certain repayment priority but this is far more limited than the repayment priority applicable to unsecured debt.

Compared to a fixed price equity issue, the key benefits of using a traditional SAFE instrument or a typical convertible bond in early-stage venture capital financing include the following:

From an investor’s point of view, the key advantages of using a traditional SAFE instrument compared to a typical venture capital bond include (a) the availability of a ‘standard form’ agreement (at least in the United States), which makes it cheaper and faster to effect, and (b) after investment, it involves a minimal time commitment for the investor given the SAFE instrument lacks ongoing supervisory and veto rights (this tends to be less typical for a venture capital convertible bond, which usually requires the issuer to produce financial reports and which may contain veto matters in favour of the investor).

From an investor’s point of view, the key disadvantages of using a traditional SAFE instrument compared to a typical venture capital convertible bond include:

When should an investor use a SAFE instrument?

A traditional SAFE instrument is typically suitable for (a) investors looking to invest at such an early stage that it is very difficult to value the issuer (e.g. pre-revenue start-ups), (b) the investment amount is so small that the potential investment costs do not warrant any material negotiations regarding terms other than the absolute basics (i.e. the investment amount, valuation cap, conversion discount, etc.), and/or (c) bridge financings, which are very minor relative to any future proposed financing. As the issuer’s business takes shape and becomes more substantial, the issue of a convertible bond or fixed price equity financing would provide better protection and more certainty for an investor. Regardless, if an investor wishes to proceed with a bespoke SAFE-like instrument, then careful consideration needs to be given to whether to add any additional conversion triggers (to ensure ultimate conversion) and/or any general investor protections, including anti-dilution protection, veto rights and access to financial information.