On Jan. 30, 2020, the Federal Reserve Board, the Office of the Comptroller of the Currency, the Federal Deposit Insurance Corporation, the U.S. Securities and Exchange Commission and the U.S. Commodity Futures Trading Commission (collectively, the “Agencies”) approved a notice of proposed rulemaking (“Proposed Rule”) to simplify and tailor the “covered fund” provisions of the regulations implementing section 13 of the Bank Holding Company Act, commonly known as the “Volcker Rule.”[1]

The Proposed Rule spans more than 160 pages (in its original format) and poses 87 separate questions on which it solicits comments (many with multiple subparts). A copy of the Proposed Rule is available at https://www.federalreserve.gov/aboutthefed/boardmeetings/files/volcker-rule-fr-notice-20200130.pdf. Comments are due by April 1, 2020.

The day the Proposed Rule was approved, we published an Alert that provided an executive summary.[2] This Memorandum supplements that Alert by examining each of the Proposed Rule’s provisions in detail.

Under the Volcker Rule, a banking entity[3] is generally barred from acquiring or retaining, as principal, an ownership interest in a “covered fund,” subject to certain exceptions. Further, a banking entity generally cannot sponsor a covered fund unless (i) it abides by a series of requirements or (ii) the sponsorship falls within an exception for non-U.S. activities.

While the Proposed Rule does not offer sweeping changes, as many in the banking and fund industries would have preferred, it does proffer several important changes designed to eliminate aspects of the current Volcker Rule regulations (“Current Rule”) that were deemed to be unduly complex or burdensome, unnecessarily broad or the cause of unintended consequences.

New Categories of Funds Would Be Made Exempt

The Proposed Rule would exempt a fund whose assets consist solely of (1) loans; (2) debt instruments; (3) rights and other assets that are related or incidental to acquiring, holding, servicing or selling such loans or debt instruments[5]; and (4) certain interest rate or foreign exchange derivatives.[6] Qualifying credit funds would not be able to engage in proprietary trading (as defined under the Current Rule) or issue asset-backed securities. The following criteria must also be satisfied for a banking entity to rely on the credit fund exclusion:

The Agencies are seeking comment regarding any quantitative limit on the amount of equity securities (or rights to acquire equity securities) held by the credit fund and the method for calculating such limit.

While not in the Proposed Rule, the Agencies are seeking comment on whether the exclusion should be limited to funds that do not invest in companies that, at the time of the investment, have more than a specified dollar amount of total annual revenue, calculated as of the last day of the calendar year (e.g., $50 million).

The Proposed Rule would exempt an issuer that is formed by or at the request of a customer of a banking entity for the purpose of providing such customer (which may include one or more affiliates of such customer) with exposure to a transaction, investment strategy or other services provided by the banking entity. A banking entity must also maintain documentation outlining how it intends to facilitate the customer’s exposure to such transaction, investment strategy or service. In order to rely on the customer facilitation vehicle exclusion, a banking entity (or any affiliate of the banking entity) must also satisfy each of the bullet points listed above for family wealth management vehicles, except the requirement to provide bona fide trust, fiduciary, investment advisory or commodity trading advisory services.

Certain Existing Exemptions Would Be Made More Available

The Proposed Rule contains modifications to three existing covered fund exclusions — foreign public funds, loan securitizations and public welfare and small business funds — to simplify the eligibility criteria and make it easier for banking entities to use and confirm compliance with these exclusions.

Under the Proposed Rule, the foreign public fund exclusion would be modified to provide more consistent treatment between U.S. registered investment companies (which are not covered funds) and their foreign equivalents. 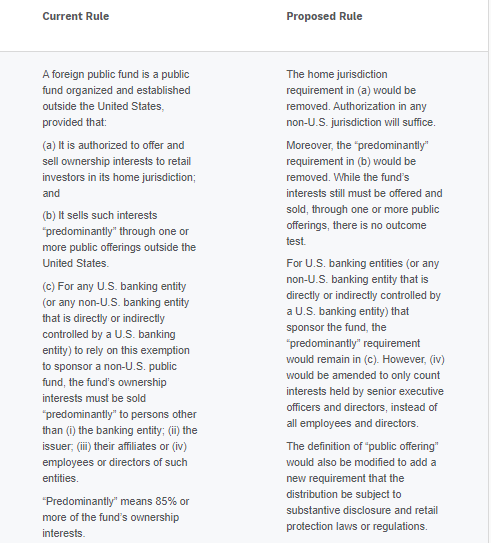 The Proposed Rule would amend two requirements of this exclusion, one of which would codify prior Agency guidance.Loan Securitizations 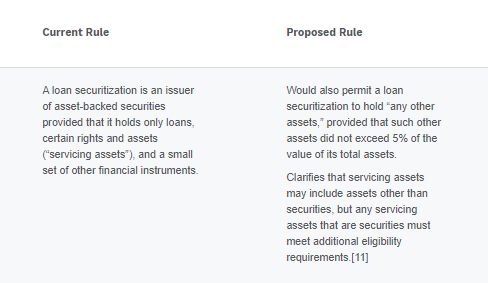 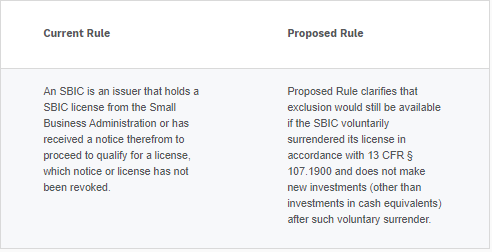 Under the Current Rule, certain foreign funds that are organized and offered outside the United States are excluded from the definition of a covered fund. The Current Rule, however, has the unintended consequence of treating certain qualifying foreign excluded funds as “banking entities” if they are affiliates or subsidiaries of a foreign banking entity. As such, the funds themselves would be subject to the Volcker Rule, including its restrictions on proprietary trading and investing in covered funds. To address this issue, the Agencies issued a moratorium on enforcement against a foreign banking entity if the qualifying foreign excluded fund met certain criteria.[13] The Proposed Rule would codify this moratorium by exempting a foreign fund from the proprietary trading prohibition and restrictions on investments in the sponsorship of covered funds (and would not attribute the foreign fund’s activities to a foreign banking entity that invests in or sponsors the fund), so long as the fund is:

Further, to qualify for this exemption, a foreign banking entity’s acquisition or retention of any ownership interest in, or sponsorship of, the qualifying foreign excluded fund must meet the requirements for permitted covered fund activities and investments outside the United States (commonly referred to as the “SOTUS” exemption).

The Proposed Rule would permit a banking entity to enter into certain limited, low-risk transactions (currently prohibited by Super 23A) with covered funds it sponsors, manages or advises (or third-party covered funds, in which such related funds hold a “controlling” investment). 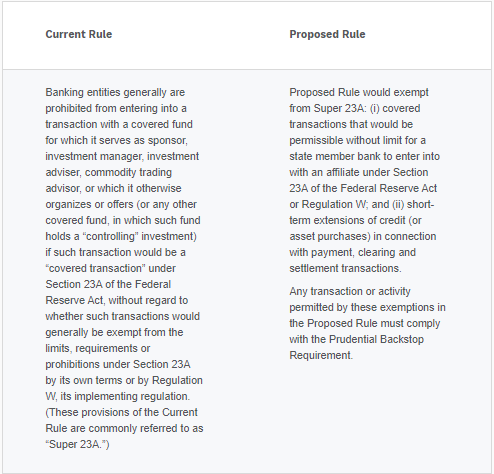 The Agencies are proposing to clarify that a debt relationship with a covered fund would typically not constitute an "ownership interest" and, therefore, would not be subject to the Volcker Rule.[14] 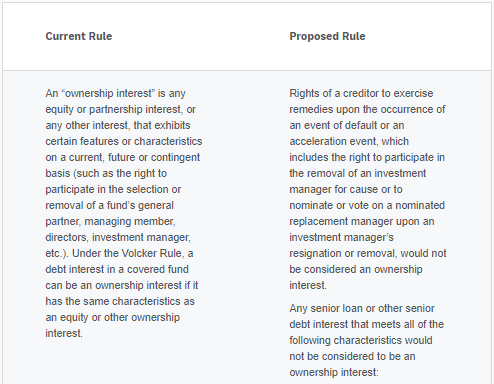 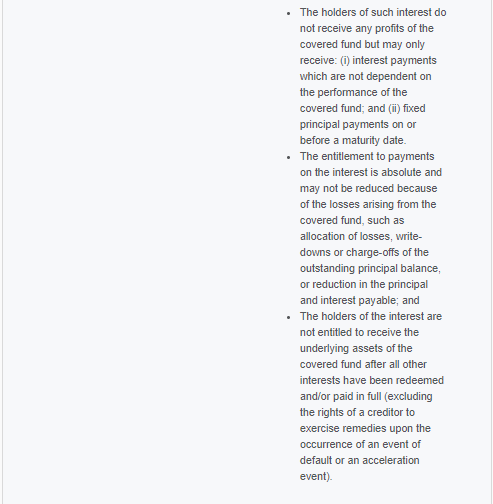 The Proposed Rule would add a new rule of construction to clarify that certain direct investments made by a banking entity alongside a covered fund should not be treated as an investment in the covered fund as long as certain conditions are met. 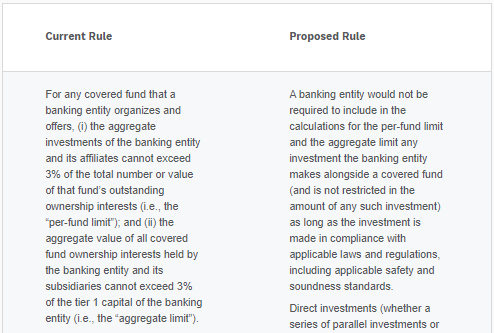 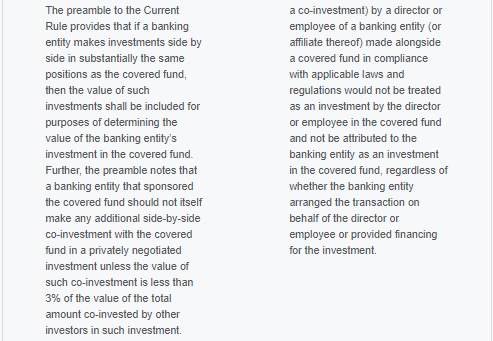 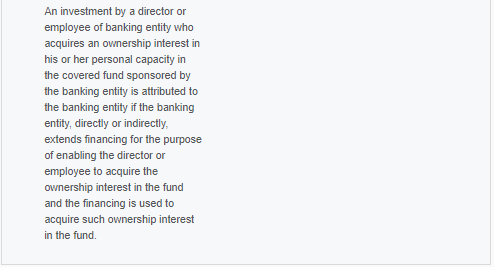