Recent case law, meanwhile, indicates that courts interpret FERC’s authority in this sphere permissively. The courts, for example, have sided with FERC in allowing considerable time to bring enforcement actions in market manipulation cases, notwithstanding statute of limitations defenses raised by the regulated entities subject to enforcement.

Energy companies and other businesses subject to FERC’s enforcement authority should continue to monitor developments in this area and make sure that their compliance programs are up to date.

FERC identifies potential instances of market manipulation through its own monitoring, self-reporting, tips from regulated entities, and referrals from market organizations or other federal or state agencies. If an investigation reveals a violation “of sufficient seriousness,” FERC staff will seek authorization from the Commission to enter settlement negotiations with the alleged violator.1 If the parties cannot settle the violation, FERC staff must again seek authorization from the Commission to bring an enforcement action.

When FERC takes enforcement action for market manipulation, it issues an “Order to Show Cause” that proposes a penalty and calls for the alleged violator to show cause why the penalty should not be imposed. The alleged violator then has two options:

(1) It can elect to have an evidentiary hearing before a FERC administrative law judge (ALJ).2 If, at the end of the hearing, FERC issues an order assessing a penalty, the alleged violator can seek judicial review in a court of appeals. Based on a review of the record, the appeals court may affirm or modify the order, set it aside, or remand the case to FERC for further action.

(2) It can elect to have FERC “promptly” assess the penalty.3 If the penalty is not paid within 60 days, FERC may bring an action in federal district court for an order affirming the assessment of the penalty, in which case the court determines, based on de novo review, whether the penalty should be enforced, modified, or set aside. In other words, the alleged violator is effectively electing to litigate the merits of the penalty in district court. As with other district court litigation, a party may appeal an adverse decision to the appropriate court of appeals.

FERC’s most recent five-year strategic plan, released in September 2018, highlights the Commission’s continued efforts to detect and bring enforcement cases against energy market manipulation. One of the plan’s many objectives is to “increase compliance with FERC rules; detect and deter market manipulation.” That objective is supported by two “core functions,” one of which is “identifying and conducting investigations of potential violations.”

FERC’s Office of Enforcement (OE) issued its 12th annual report on enforcement on November 15, 2018. Key statistics highlighted in the report include: 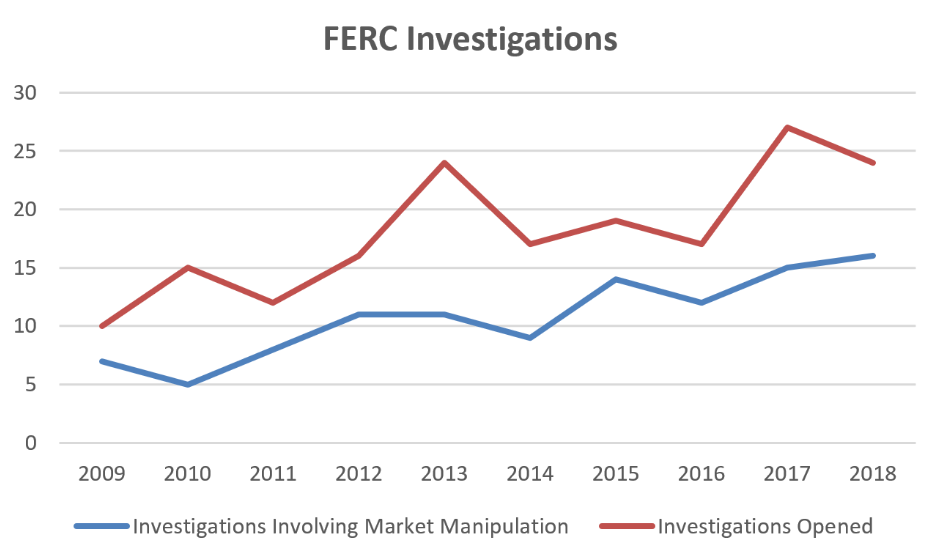 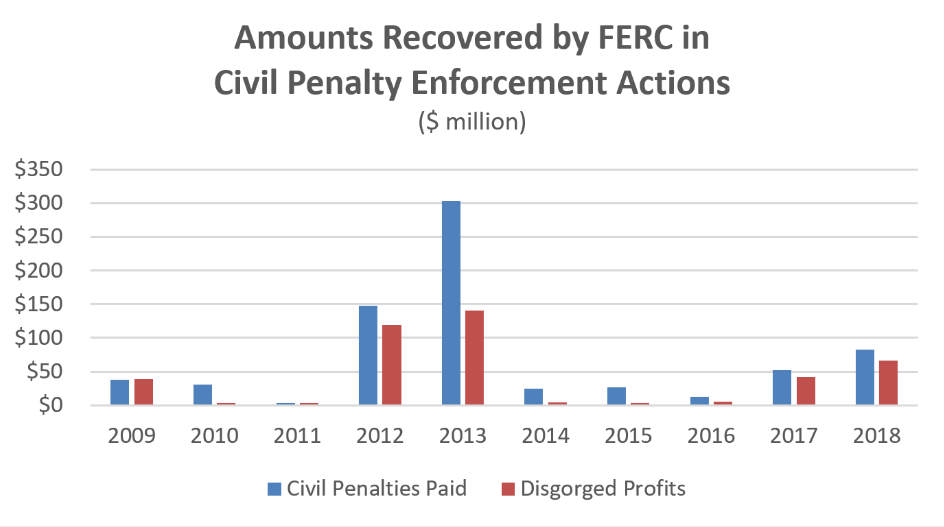 The report also highlights the importance of establishing and maintaining a strong compliance program, including self-reporting policies. The existence of an effective compliance program is an important consideration in FERC decisions to enter into settlement agreements, as well as to reduce significantly proposed penalties from the amount that otherwise could be assessed under the FERC Penalty Guidelines. Those guidelines also allow for mitigated penalties for self-reported violations.

Two recent market manipulation cases have tested the bounds of the limitations period for FERC enforcement actions under the Federal Power Act. The decisions in those cases affirm that FERC has significant leeway as to when it brings an enforcement action.

In FERC v. Powhatan Energy Fund, LLC,4 the defendants elected to proceed in federal district court rather than before a FERC ALJ. FERC issued a penalty order on May 19, 2015, which the defendants did not pay. FERC filed a complaint on July 31, 2015. The defendants then argued that the limitations period had run on FERC’s claims. While the parties agreed that the applicable limitations period is five years, they disagreed as to when that period began. The defendants argued that FERC’s claims had accrued when the alleged violations occurred (from June 1, 2010, to August 3, 2010) and that, therefore, all but four days of alleged violations were time-barred. The court disagreed and sided with FERC, holding that the claims had accrued only when the defendants failed to pay the penalty within 60 days of FERC’s penalty order. The court acknowledged, however, that the case presented “substantial ground for difference of opinion” and invited the defendants to bring an interlocutory appeal, which they did.5 Several trade groups have submitted an amicus brief, taking the defendants-appellants’ side, and FERC filed its response brief just this week. A decision from the court of appeals can be expected by the end of the year.

As in Powhatan, the defendants in FERC v. Silkman6 chose to contest FERC’s penalty assessment in district court. FERC issued a penalty order on August 29, 2013, and the defendants did not pay. FERC then filed a petition in district court on December 2, 2013, to enforce its penalty order. (The case was stayed for several years, pending resolution of several related matters.7) The defendants argued that the statute of limitations barred FERC’s claims. As in Powhatan, the court held that FERC’s claims had not accrued when the violations occurred. Instead, the court held that the claims had accrued when FERC assessed the penalty, meaning that FERC’s enforcement action in the district court was not time-barred.

As the recent Powhatan and Silkman decisions indicate, the body of case law defining FERC’s enforcement authority continues to develop. Regulated companies should be aware that the statute of limitations in market manipulation cases will likely be read permissively. A strong internal compliance program, coupled with self-reporting in appropriate instances, can help reduce risk.