It is an odd business relationship. As far as the customers go, they’re buying a service that they truly hope they will never need. For the companies, the ideal customer is the one they never meet, the one who pays their premiums, and then luckily avoids the reasons for having insurance in the first place. Given these motivations, we might expect the public’s relationship to the insurance industry to be a little bit strained. And it is strained. In life, it can cause policyholders to act like the company is trying to rip them off, even when they’re trying to provide coverage. In the courtroom, it can cause “bad faith” to be treated more like a presumption and less like an element that needs to be proven.

When insurance companies appear in court, either directly in coverage cases or indirectly as the entity expected to foot the bill, the attitudes toward them can be complex. Aside from the “deep-pockets” perception, there is also a question of credibility. On the one hand, jurors want to defend the value of a contract and believe that we should all be bound by what we sign. On the other hand, they can be highly critical of a company that looks like it’s trying to split hairs in order to avoid providing the coverage its customers thought they had. Anytime an insurance company steps in or near a courtroom, it is important to understand that dynamic. In this post, I will share some of our own recent data as well as some data from others on these attitudes.

Claims Are Justified, Denials Are Suspect

Jurors understand that a claim isn’t necessarily gospel. At the same time, by a two-to-one margin, they are likely to assume that a claim is legitimate rather than exaggerated.

Believing that the claims tend to be legitimate does extend to a belief that insurance companies are willing to pay those claims. However, a substantial proportion — more than a third — will assume that an insurance company will try to avoid paying even legitimate claims. 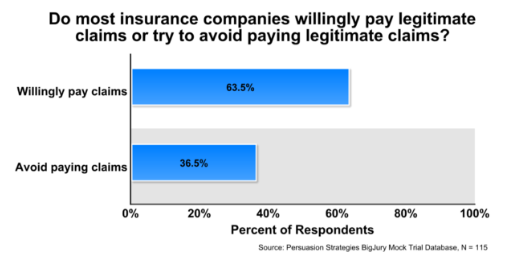 Before they hear any specific information, they will have a general view of insurance companies. For most, 54 percent, that view is unfavorable. And the proportion who add a “very” to that is almost twice as high on the “unfavorable” side as on the “favorable” side. 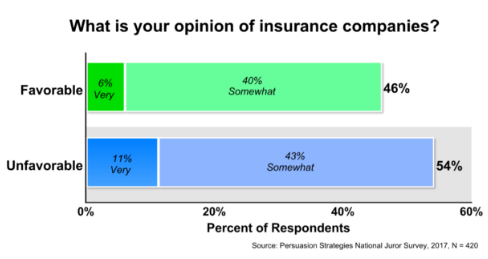 The Default Leanings: Some Neutrals, No Supporters

This factors into the calculations you make in trying an insurance related case. DRI conducted a survey of 1,020 adults and found “59% of respondents said that they would be inclined to favor the individual” in a suit involving an insurance company. “Only 20% of respondents said they would not favor either.” The only demographic in which fewer than half would be biased against the insurance company ended up being college-educated individuals making more than $100,000 per year.

In 2015, McKennon Law Group reported on research from litigation consultant Mark Sobus, who quantified the disadvantage faced by insurers trying to persuade jurors. He asked jurors, “In a dispute between a policyholder and his/her insurance company, are you someone who without knowing any facts would automatically side with the policyholder or the insurance company?” The result? No one he could find would side by default with the insurance company, but roughly 30 percent of jurors indicated that they would side with the policyholder by default. “That thirty percent of jurors can almost never be persuaded to change their minds.”

So thorough and effective jury selection is critical, as is working hard to come up with a message that humanizes the company and justifies the decision. By nature, insurers can sometimes be reticent about expenses. But the additional cost of effective pretrial research, jury selection, and case refinement is quite modest in comparison to the costs of an adverse verdict.