Anecdotally, surveys of corporate counsel confirm that complex workplace litigation – and especially class actions and multi-plaintiff lawsuits – remains one of the chief exposures driving corporate legal budgetary expenditures, as well as the type of legal dispute that causes the most concern for companies. The prime component in that array of risks is indisputably complex wage & hour litigation.

The circuit-by-circuit analysis of 301 class certification decisions in all varieties of workplace class action litigation is detailed in the following map: 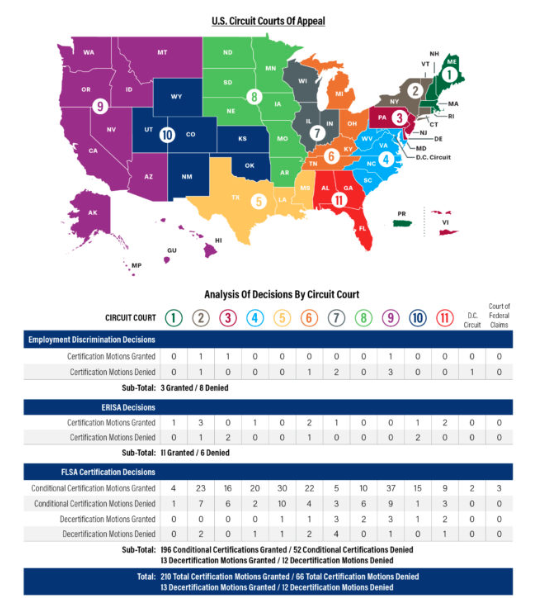 Most significantly, for only the second time in over a decade, and for the second year in a row, wage & hour lawsuit filings in federal courts decreased. That being said, the volume of FLSA lawsuit filings for the preceding four years – during 2014, 2015, 2016, and 2017 – were at the highest levels in the last several decades.

The analysis of these rulings – discussed in Chapter V of this Report – shows that a high predominance of cases are brought against employers in “plaintiff-friendly” jurisdictions such as the judicial districts within the Second and Ninth Circuits. For the first time in a decade, however, rulings were equally voluminous out of the Fifth Circuit, which also tended to favor workers over employers in conditional certification rulings. This trend is shown in the following map: 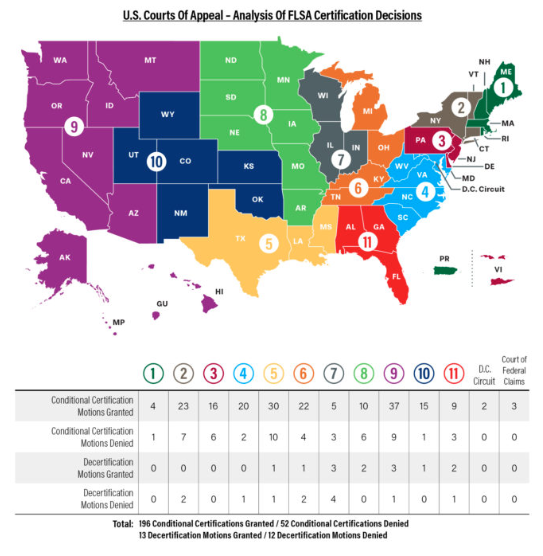 The statistical underpinnings of this circuit-by-circuit analysis of FLSA certification rulings is telling in several respects.

Second, as the burdens of proof reflect under 29 U.S.C. § 216(b), plaintiffs won the overwhelming majority of “first stage” conditional certification motions (196 of 248 rulings, or approximately 79%). However, in terms of “second stage” decertification motions, employers prevailed in just over half of those cases (13 of 25 rulings, or approximately 52% of the time).

The following chart illustrates this trend for 2018: 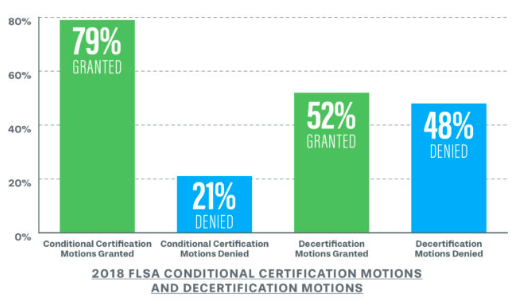 Third, this reflects that there has been an on-going migration of skilled plaintiffs’ class action lawyers into the wage & hour litigation space for close to a decade. Experienced and able plaintiffs’ class action counsel typically secure better results. Further, securing initial “first stage” conditional certification – and foisting settlement pressure on an employer – can be done quickly (almost right after the case is filed), with a minimal monetary investment in the case (e.g., no expert is needed, unlike the situation when certification is sought in an employment discrimination class action or an ERISA class action), and without having to conduct significant discovery (per the case law that has developed under 29 U.S.C. § 216(b)).

As a result, to the extent litigation of class actions and collective actions by plaintiffs’ lawyers is viewed as an investment of time and money, prosecution of wage & hour lawsuits is a relatively low cost investment, without significant barriers to entry, and with the prospect of immediate returns as compared to other types of workplace class action litigation.

Hence, as compared to ERISA and employment discrimination class actions, FLSA litigation is less difficult or protracted for the plaintiffs’ bar, and more cost-effective and predictable. In terms of their “rate of return,” the plaintiffs’ bar can convert their case filings more readily into certification orders, and create the conditions for opportunistic settlements over shorter periods of time.

The certification statistics for 2018 confirm these factors.

The great unknown for workplace class action litigation is the impact of the Epic Systems ruling, and whether it reduces class action activity in the judicial system and depresses settlement values of workplace lawsuits.

At the same time, a future Congress may effectuate a legislative response to abrogate or limit the impact of workplace arbitration agreements with class action waivers, but that will be dependent upon ideological and political dynamics based on future elections.

As a result, Epic Systems may well impact case filing numbers in the near term, and as a result, class action settlement numbers are likely to decrease.

Against the backdrop of wage & hour litigation, the ruling in Wal-Mart also fueled more critical thinking and crafting of case theories in employment discrimination and ERISA class action filings in 2018.

The Supreme Court’s Rule 23 decisions have had the effect of forcing the plaintiffs’ bar to “re-boot” the architecture of their class action theories. At least one result was the decision two years ago in Tyson Foods v. Bouaphakeo, 136 S. Ct. 1036 (2016), in which the Supreme Court accepted the plaintiffs’ arguments that, in effect, appeared to soften the requirements previously imposed in Wal-Mart for maintaining and proving class claims, at least in wage & hour litigation.

Hence, it is clear that the playbook on Rule 23 strategies is undergoing a continuous process of evolution.

Filings of “smaller” employment discrimination class actions have increased due to a strategy whereby state or regional-type classes are asserted more often than the type of nationwide mega-cases that Wal-Mart discouraged.

In essence, at least in the employment discrimination area, the plaintiffs’ litigation playbook is more akin to a strategy of “aim small to secure certification, and if unsuccessful, then miss small.”

The certification rate of 27% was the lowest on record over the last decade.

The following map demonstrates this array of certification rulings in Title VII and ADEA discrimination cases: 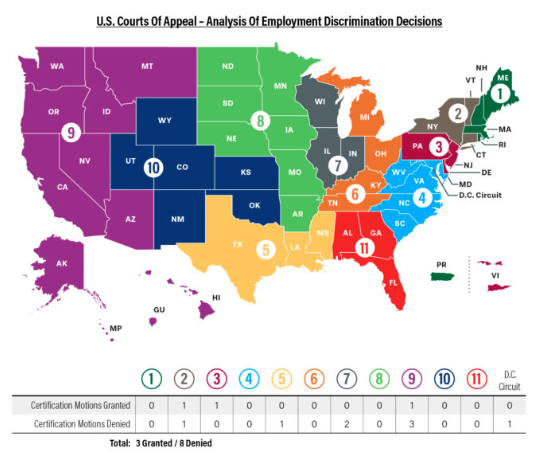 In terms of the ERISA class action litigation scene in 2018, the focus continued to rest on precedents of the U.S. Supreme Court as it shaped and refined the scope of potential liability and defenses in ERISA class actions.

The decisions in 2018 show that class certification motions have the best chance of denial in the context of ERISA welfare plans, and ERISA defined contribution pension plans, where individualized notions of liability and damages are prevalent.

A map illustrating these trends is shown below: 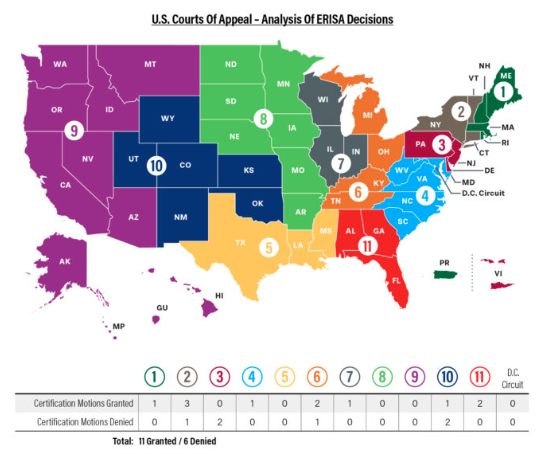 So what conclusions overall can be drawn on class certification trends in 2018?

The following bar graph details the win/loss percentages in each of these substantive areas:

– a 65% success rate for certification of ERISA class actions; and, 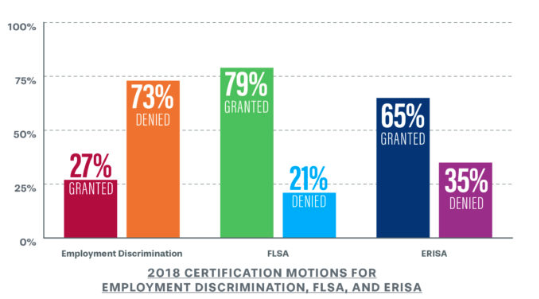 Obviously, the most certification activity in workplace class action litigation is in the wage & hour space.

The trend over the last three years in the wage & hour space reflects a steady success rate that ranged from a low of 70% to a high of 79% (with 2018 representing the highest success rate ever) for the plaintiffs’ bar, which is tilted toward plaintiff-friendly “magnet” jurisdictions were the case law favors workers and presents challenges to employers seeking to block certification.

Yet, the key statistic in 2018 for employers was a significant decrease in the odds of successful decertification of wage & hour cases to 52%, as compared to 63% in 2017, a decrease of 11%.

Comparatively, the trend over the past five years for certification orders is illustrated in the following chart: 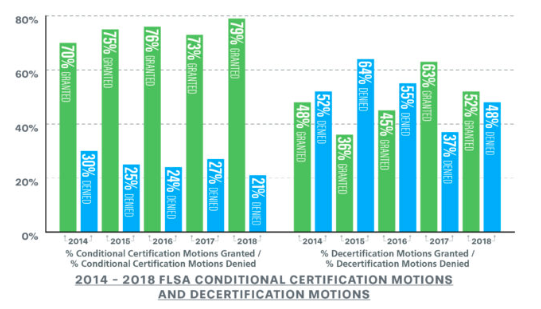 While each case is different and no two class actions or collective actions are identical, these statistics paint the all-too familiar picture that employers have experienced over the last several years. The new wrinkle to influence these factors in 2018 was the Supreme Court’s ruling in 2018 in Epic Systems and in 2016 in Tyson Foods. To the extent it assists plaintiffs in their certification theories, future certification decisions may well trend further upward for workers.

There are multiple lessons to be drawn from these trends in 2018.

First, while the Wal-Mart ruling undoubtedly heightened commonality standards under Rule 23(a)(2) starting in 2011, and the Comcast decision tightened the predominance factors at least for damages under Rule 23(b) in 2013, the plaintiffs’ bar has crafted theories and “work arounds” to maintain or increase their chances of successfully securing certification orders in ERISA and wage & hour cases. This did not hold true in the context of employment discrimination lawsuits. In 2018, their certification numbers were up for ERISA and wage & hour case, and down for employment discrimination litigation.

Second, the defense-minded decisions in Wal-Mart and Comcast have not taken hold in any significant respect in the context of FLSA certification decisions for wage & hour cases. Efforts by the defense bar to use the commonality standards from Wal-Mart and the predominance analysis from Comcast have not impacted the ability of the plaintiffs’ bar to secure first-stage conditional certification orders under 29 U.S.C. § 216(b). If anything, the ruling two years ago in Tyson Foods has made certification prospects even easier for plaintiffs in the wage & hour space, insofar as conditional certification motions are concerned. The conversion rate of successful certification motions hit an all-time high of 79% in 2018.

Third, while monetary relief in a Rule 23(b)(2) context is severely limited, certification is the “holy grail” in class action litigation, and certification of any type of class – even a non-monetary injunctive relief class claim – often drives settlement decisions. This is especially true for employment discrimination and ERISA class actions, as plaintiffs’ lawyers can recover awards of attorneys’ fees under fee-shifting statutes in an employment litigation context. In this respect, the plaintiffs’ bar is nothing if not ingenuous, and targeted certification theories (e.g., issue certification on a limited discrete aspect of a case) are the new norm in federal and state courthouses.

Fourth, during the certification stage, courts are more willing than ever before to assess facts that overlap with both certification and merits issues, and to apply a more practical assessment of the Rule 23(b) requirement of predominance, which focuses on the utility and superiority of a preclusive class-wide trial of common issues. Courts are also more willing to apply a heightened degree of scrutiny to expert opinions offered to establish proof of the Rule 23 requirements.

Finally, employers now have a weapon to short-circuit the decision points for class action exposure through use of mandatory workplace arbitration agreements. Based on the Epic Systems ruling, a class waiver in an arbitration agreement is now an effective first-line defense to class-based litigation.

In sum, notwithstanding these shifts in proof standards and the contours of judicial decision-making, the likelihood of class certification rulings favoring plaintiffs are not only “alive and well” in the post-Wal-Mart and post-Comcast era, but also thriving. The battle ground may shift, however, as employers may create a bulwark against such class-based claims based on the Epic Systems ruling.