From a position of having a relatively low profile in the regional and international renewable energy community, Taiwan has fast become a focus of developers, investors and others as it seeks to pursue an ambitious agenda of rebalancing its energy mix away from largely imported fossil fuels and towards home grown wind, solar, hydro and other renewable energy sources.

The key driver of this is the government’s decision to phase out nuclear power (which currently accounts for approximately 10% of Taiwan’s installed generation capacity) as well as to reduce its reliance on imported coal.

In particular, the recent award of 5.5GW of grid capacity to new offshore wind projects is expected to result in a high level of activity for this market in the coming years. The successful financing in June 2018 of the 128MW Formosa 1 project, Taiwan’s first utility-scale offshore wind farm, demonstrates the appetite of the local and international bank market to provide long term project finance for offshore wind projects in Taiwan.

Which sectors are active?

Taiwan’s gross energy production was 270,278.7GWh in 2017.1 Taiwan’s main source of energy is thermal power with coal, nuclear and gas (including LNG) representing the most important sources of fuel in the island’s energy mix. The composition of installed generation capacity as of 2017 is as follows: 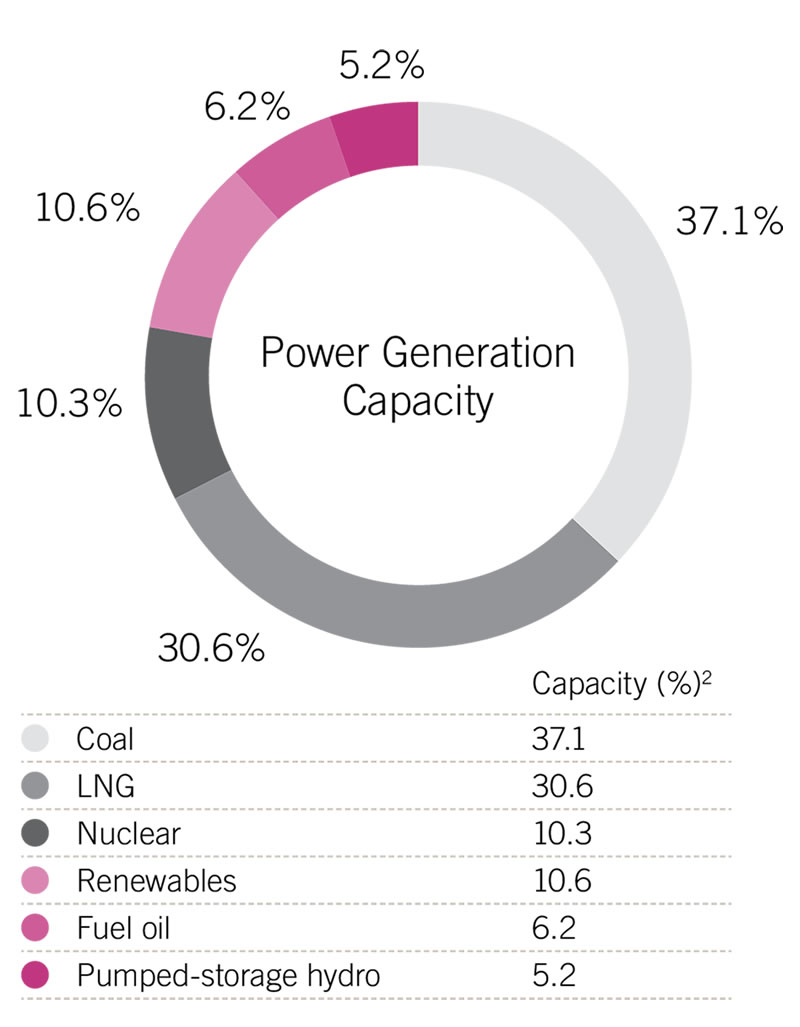 The composition of Taiwan’s renewable energy generation capacity as of 2017 is as follows: 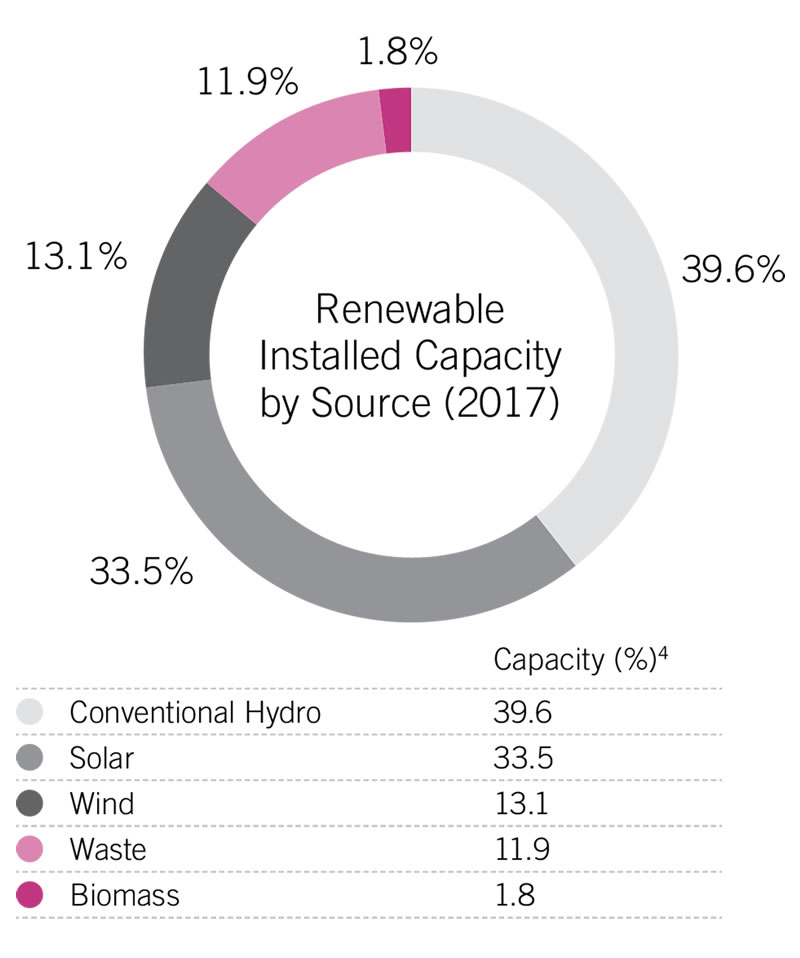 The government aims to achieve the increase in renewable generation by developing the following sources of renewable energy generation capacity:

To support the development of renewable energy the government in 2009 passed the Renewable Energy Development Act (“REDA”) which provides for a feed-in tariff system (see further details below) and offers a range of incentives to renewable power producers. The REDA is currently under an amendment process in the legislative yuan (legislative assembly).

The Electricity Business Act (the “EB Act”) was also subject to substantial reform in 2017, including provision for the future liberalisation of the electricity market but also addressing the development of renewable energy by providing for preferential measures for renewable power producers, such as priority grid connection and dispatch. Further regulatory changes have sought to facilitate the expansion of the offshore wind sector in Taiwan, such as incentives and subsidies, land, zoning and construction arrangements.

As well as legislative and regulatory measures, the government has also announced measures to streamline approval processes and significant investment in infrastructure designed to facilitate the development of renewable energy – such as the expansion of Taichung Port as a base for the development of the offshore wind sector.

How does the system work?

Taiwan Power Generation Company, commonly referred to as Taipower ("台電"), is the state-owned company under the control of the Ministry of Economic Affairs (“MOEA”). Taipower is the main energy producer in Taiwan and currently has a legal monopoly on the distribution and sale of electricity. Commercial private power producers are currently required to enter into a power purchase agreement (“PPA”) with Taipower, although the recent amendments to the EB Act provide for:

The permitting process for the development of renewables projects in Taiwan can be relatively complex and involve various authorities including the Environmental Protection Administration, MOEA, BOE, Taipower, local governments and other government agencies.

For example, an offshore wind project will require:

an EIA Approval; an Establishment Permit; a Recordation Approval; entry into a PPA (see Hot topics); a Work Permit; and an Electricity Business Licence. As well as a number of other consents and approvals.

Renewable energy is purchased by Taipower according to feed-in tariffs determined by the government (see below). In addition, the recent amendments to the EB Act provides other incentives to renewable IPPs, including:

subsidy programmes (such as equipment subsidies and demonstration subsidies) and the establishment of a specific fund to finance such subsidies. The fund is financed by power producers in proportion to their non-renewable electricity generation capacity; exemption from import duties for renewable power equipment during construction or operation (provided there is no manufacturer for such equipment in Taiwan); and various rights and arrangements for renewable IPPs in relation to zoning and construction regulations.

Feed-in tariffs (“FiTs”) for wind, solar, hydropower, biomass and waste are set in New Taiwanese Dollars (“NTD”) on a yearly basis by the MOEA pursuant to the EB Act and the REDA. The REDA provides that the purchase price for renewable energy must not be lower than the average cost for domestic fossil fuel power production.

A summary of the FiTs for renewable energy applicable for the calendar year 2018 is set out below.9 The FiTs for 2019 are expected to be announced at the end of October 2018. 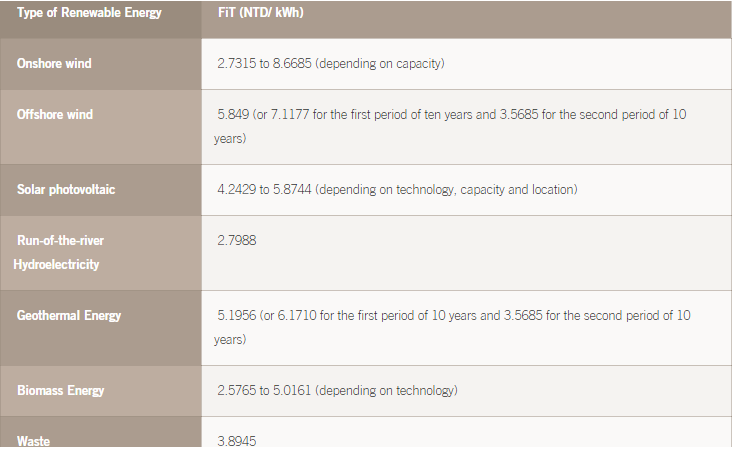 Funding of the FiT

The ‘RED Fund’ was established 2009 to support renewable power generation, including by subsidising renewable energy tariffs. This is funded by conventional power producers, Government treasury contributions and other sources. While the RED Fund is available to fund the FiT, the primary obligation for payment of the FiT sits with Taipower.

In early 2018, the MOEA released the “Directions for Allocating Installed Capacity of Offshore Wind Potential Zones” (the “Allocation Directions”) which provided for a selection and bidding process for the allocation of 5.5GW of grid capacity to offshore wind projects which obtained approval of an Environmental Impact Assessment by the end of 2017.

The Allocation Directions provided for:

a selection procedure for the award of fixed FiTs for:

a selection and bidding procedure for the award of a competitively determined tariff, for a total capacity of up to 2GW (Tier 3 projects).

The MOEA awarded a total of 3,836MW of grid capacity through the selection process (Tier 1 and Tier 2 above) in April 2018, and subsequently awarded 1,664MW of grid capacity through the bidding process (Tier 3 above) in June 2018. A full list of the projects that were allocated capacity in the selection process and the bidding process can be found on the MOEA website.

All projects awarded capacity pursuant to the Allocation Directions are required to comply with the requirements set out in a grid contract (“Grid Contract”) to be entered into with the MOEA. The form of Grid Contract will be different for each of Tiers 1, 2 and 3 and will address (among other things):

Projects will also be bound by the terms of the original selection proposals submitted to MOEA.

The model form of PPA that is used by Taipower for offshore wind projects regulates:

It is a short document which does not seek to provide a comprehensive allocation of risks as between the generator and Taipower / government (as would be the case under a typical long form emerging markets "PPA"). Instead, it is more analogous to a prescribed statutory PPA used in the context of a feed-in-tariff model in developed and/or liberalised markets, and should be read in conjunction with the applicable regulatory regime in Taiwan.

The model PPA for offshore wind was updated by Taipower in December 2017 and is in a very similar form to the template form of PPA used in numerous existing onshore wind and solar projects in Taiwan.

the purchase of electricity by Taipower; and the connection of offshore wind projects to Taipower’s electricity grid.

The government intends to achieve 20GW of solar PV installed capacity by 2025 through the development of both rooftop and ground-mounted systems, which are expected to respectively account for 3GW and 17GW.13 There have also been examples of floating solar technology uses.

In September 2016, the government approved a “Solar PV Two-Year Promotion Project” targeting to achieve 1.52GW of additional solar power generation within a two-year period. Under this plan, the government was to:

The government is also encouraging the development of small scale capacity through the “Million Rooftop PVs Program”.