The SEC Proposes to Expand Capital-Raising Opportunities for Reg D, Reg A and Crowdfunding Offerings

On March 4, 2020, the Securities and Exchange Commission (SEC) issued proposed rules to simplify certain aspects of exempt offerings with the goal of expanding access to capital for issuers and increasing opportunities for investors. The proposed rules are set forth in SEC Release No. 33-10763.

Before delving into the proposed rules, the SEC provided background on the various offering exemptions. It is interesting to note that although new types of exemptions have been introduced during the past few years, such as Rule 506(c) under the Securities Act of 1933, as amended (Securities Act), permitting general solicitation and general advertising in a private placement; Regulation A (Reg. A, also commonly referred to as Reg. A+); and crowdfunding (Reg. CF), the traditional Regulation D (Reg. D) Rule 506(b) offering exemption remained the most popular during 2019.1 The SEC also provided helpful tables of the various offering exemptions, Reg. A requirements and intrastate offerings (i.e., Rules 147 and 147A).

SEC Chairman Jay Clayton characterized the current offering framework as “overly complex” in his press release remarks: “The complexity of the current framework is confusing for many involved in the process, particularly for those smaller companies whose limited resources spent on navigating our overly complex rules are diverted from direct investments in the companies’ growth. These proposals are intended to create a more rational framework that better allows entrepreneurs to access capital while preserving and enhancing important investor protections.”

1. Integration—New safe harbors and a general principle that would override the current five-factor offering integration test

3. Test-the-Waters—Permit generic solicitations to determine which type of exempt offering to conduct (e.g., Reg. A or Reg. CF)

5. Other Stuff—Harmonize a few Reg. A requirements with registered offering requirements, and Reg. D with Reg. A financial requirements

Integration analysis determines whether separate multiple offerings should be considered the same offering. If two or multiple offerings are integrated, an exemption relied upon by one or more offerings will likely not be valid and the issuer will likely have violated Section 5 of the Securities Act by making an unregistered public offering. Currently, integration requires analysis of five factors, and if the offerings are deemed integrated, then each offering must comply with the offering exemption or registration requirements of the other offerings.2 In the SEC’s proposal, a general principle and four nonexclusive safe harbors would replace the five-factor test.

1. 30-Day Safe Harbor: Any offering made more than 30 calendar days before the commencement or more than 30 calendar days after the termination or completion of any other offering would not be integrated. Plus, for offerings not using general solicitation, purchasers either were not solicited through the use of general solicitation or there was a prior substantive relationship.

2. Rule 701/Regulation S (Reg.S): Rule 701 offerings (pursuant to employee benefit plans) and Reg. S offerings (offerings outside the United States) would not be integrated with other offerings.

4. General Solicitation Offerings: General solicitation offerings would not be integrated if made subsequent to any prior terminated or completed offering.

The SEC-proposed safe harbors would also provide guidance on the meaning of “terminated or completed,” such as withdrawal via an SEC filing of an offering or registration statement, or, for purposes of Reg. D, the later of the date (i) the issuer entered into a binding commitment to sell securities under the offering (subject only to conditions outside the investor’s control) or (ii) the issuer and its agents ceased efforts to make further offers to sell the issuer’s securities.

In addition, if offerings are not covered by any of those four safe harbors, then offerings would nonetheless not be integrated if it can be established that each offering complied with either registration requirements or an offering exemption.

The SEC proposed that “demo day” communications would not be deemed general solicitation. Demo days are when a college, a university or another institution of higher education; a local government; a nonprofit organization; or an angel investor group, incubator or accelerator organizes an event or meeting and invites issuers to present their businesses to potential investors. The organizer would not be permitted to conduct certain activities, including (i) charging fees to attendees, other than administrative fees; (ii) receiving fees for introductions; (iii) making investment recommendations or providing investment advice to attendees; and (iv) engaging in any investment negotiations between the issuer and investors attending the event. Plus, information in the notice of the event would be limited.3

The SEC has also proposed deleting the Rule 502(c) examples of general solicitation and adding a new rule outside of Reg. D that would update and expand the general solicitation examples to include present-day communications, such as emails and text messages, and information sharing about companies by angel investors.

Reg. CF currently prohibits an issuer to advertise an offering outside of the intermediary’s platform except a notice that does not contain anything more than certain information as set forth in Rule 204. The SEC is proposing to allow oral communications as long as they comply with Rule 204.

Issuers may currently “test the waters” for offerings (i.e., gauge interest) with QIBs or IAIs before or after filing a registration statement or offering statement (with regard to Reg. A).

The SEC is proposing a new rule that would permit an issuer to solicit indications of interest in an exempt offering orally or in writing prior to determining which exemption it would rely on to conduct the offering. This concept would also include generic solicitations of interest prior to determining whether to conduct an offering under Reg. A or Reg. CF.

The SEC cautions that if soliciting generic indications of interest under the proposed rule is done in a manner that would constitute general solicitation, and the issuer ultimately decides to conduct an exempt offering that does not permit general solicitation, the issuer would need to analyze whether the generally solicited offer and the subsequent private offering could be integrated.

The SEC has proposed to increase maximum offering amounts for Rule 504, Reg. CF and Reg. A offerings.

Rule 504 of Reg. D currently provides for a maximum offering limit of $5 million in a 12-month period. The SEC is proposing to raise it to $10 million.

The maximum offering amount for Reg. A, Tier 2 offerings would be raised from $50 million to $75 million. The SEC’s proposal is based on recommendations from groups such the Small Business Forums and Department of Treasury and feedback from the SEC Concept Release issued in September 2019. The SEC noted a similar belief in raising the offering limit as it did for Reg. CF; a higher limit will attract more issuers to raise more capital.

Appendix A sets forth the table in the proposing rule release that compares the current and proposed offering and investment limits.

Rule 506(c) of Reg. D, which permits general solicitation, provides a nonexclusive list of verification methods that issuers may use in seeking to satisfy the verification requirement that natural person purchasers be accredited investors. The SEC is proposing to add a new example of verification in that an issuer could verify that an investor, for which the issuer previously took reasonable steps to verify as an accredited investor, remains an accredited investor as of the time of a subsequent sale if the investor provides a written representation to that effect and the issuer is not aware of information to the contrary.

Reg. A and Crowdfunding Eligibility

The SEC is proposing to amend Reg. CF to permit the use of certain special purpose vehicles, which are currently ineligible, to facilitate investing in Reg. CF issuers (crowdfunding vehicles), and to limit the securities eligible to be sold to equity and debt securities, securities convertible or exchangeable for equity interest, and guarantees of any of those securities.

The SEC is also proposing to amend Reg. A to also exclude (in addition to issuers that file Reg. A reports) issuers that are delinquent in their Exchange Act reporting obligations in the prior two years from relying on Reg. A.

Harmonization for Reg. D and Reg. A

Traditional registered offerings and Reg. A offerings would also be harmonized so that Reg. A issuers could do the following: 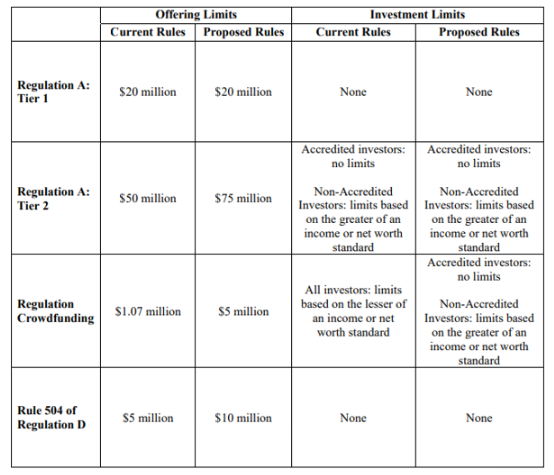