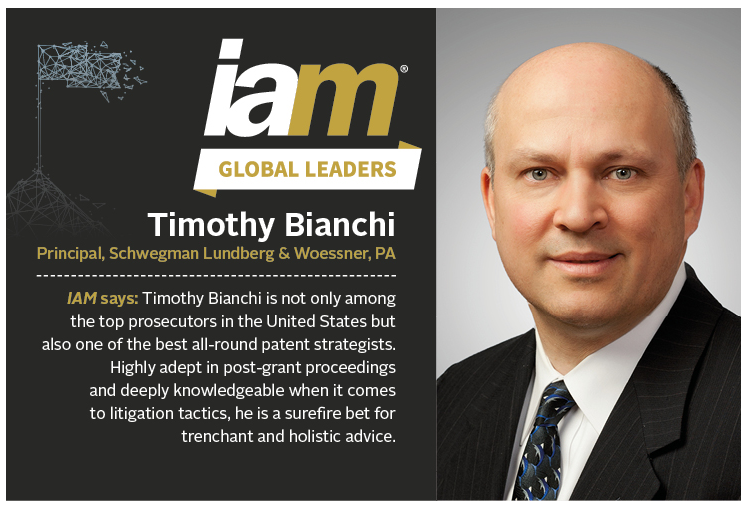 Patent law became very important during my work as a research scientist at Honeywell, as the company was involved in patent infringement lawsuits relating to navigation devices and autofocus cameras. The due diligence and analysis that was conducted during those suits was fascinating. After being exposed to this, I was hooked.

What do you believe are the main qualities of a top-ranked patent lawyer?

Patent attorneys should have sharp technical skills to leverage their legal analysis. They should also be business savvy so that they can objectively test proposed solutions using practical industry knowledge in difficult patent matters. Patent attorneys must have excellent communication skills to make their case as clear as possible and the know-how to effectively communicate their ideas to the intended audience.

Which of the cases on which you have worked are you most proud of and why? The case that I am most proud of involved a contentious patent infringement dispute over several patents between two companies. It took months of posturing and diplomacy, but we used the time to effectively amplify our client’s patent position in a relatively short time to obtain several relevant and commercially valuable patents, thereby increasing our bargaining position to ultimately negotiate a favourable settlement for our client. In doing so, we also kept all of our post-grant challenge and litigation options open. IP disputes deeply affect people and their businesses. They affect the very survival of a company and its future direction. Lawyers must know and apply the law, but they can also leverage industry relationships to better communicate between adversaries and achieve a solution to a dispute.

What are the biggest changes that you have seen in US patent litigation since your career began?

The America Invents Act (AIA) is probably the single biggest change to patent practice in my career. The AIA moved the United States to a first-to-file system, expanded the geographical reach of prior art, created administrative patent review trials to test patent validity and redefined anticipation, among other things. The changes to patent practice from the AIA are still being interpreted by the courts and will be determined over the years to come.

US patent litigation has incorporated the step of determining patent validity using AIA patent trials in the majority of pending litigation. The PTAB is the first stop for testing validity. Litigation teams have had to learn how to use the PTAB with parallel district court litigation. This can be challenging because patent law is evolving faster than ever before. The velocity of administrative and court decisions and their impact on patent cases is profound. These decisions are applied to patent procurement, post-grant proceedings and litigation almost instantaneously. Lawyers must stay up to date to navigate issues effectively in every litigation.

A lot of people believe that litigation in the United States is now skewed against patent owners. Do you agree?

It is harder for patent owners to enforce their patents after the creation of AIA trials in the PTAB. However, the skew of the patent system is a complex question because in the pre-AIA system, patent owners had some advantages in litigation which were more justifiable than others. For example, it was much more expensive and unpredictable to invalidate a patent before the introduction of the PTAB’s AIA trials (eg, inter partes, post-grant and covered business method patent reviews and derivation proceedings). Therefore, ‘bad’ patents were harder to cancel and got more traction in the district courts than they should have. This enhanced the attractiveness of patent trolling. The AIA was passed in part to stem the growing practice of patent trolling.

However, AIA trial proceedings could be vulnerable to abusive petition practices that are almost impossible for any small patent owner to defend against. Although the pendulum appears to be slowly swinging back towards patent enforcement, the PTAB is still very much a work in progress, which means that changes in PTAB practice will develop for years to come.

Even if the AIA was not a factor, patent owners face a negative bias when it comes to patent eligibility (35 USC § 101). Law makers are threatening legislation to address patent eligibility, but there is no shortage of disagreement on what should be done and it is unclear if there will be any resolution soon.

Despite these trends, patents are not disappearing and will continue to be the lifeblood of tech businesses. Patent owners have had to work harder to ensure that their patents are error free and robust enough to withstand patent challenges in the current legal environment.

You have done a lot of work at the PTAB. What is the key to being successful there?

For patent challengers, success in the PTAB is achieved by carefully crafting an invalidity case with the best prior art that you can obtain. Good prior art is often difficult to locate, but it is worth rolling up your sleeves to find it because excellent prior art will beat a host of weaker combination challenges. In addition, the PTAB is becoming increasingly critical of multiple patent challenge requests and continues to pressure petitioners to present their best art or perhaps lose the ability to file again, depending on the circumstances. More importantly, any patent that is not soundly defeated by post-grant challenges can become stronger due to legal estoppel and the practical consideration that if the PTAB did not find it invalid, a court is also unlikely to do so. Thus, finding the best and right prior art is crucial.

To find great prior art, a patent challenger must perform a search using reasonable claim interpretations, but also anticipate different interpretations and counterarguments while preparing the petition.

Patent challengers must factor in the PTAB’s all-or-nothing approach to deciding institution of petitions after SAS Institute. In the past, petitioners could generate several challenges and allow the board to select the ones that it preferred. The board could pick and choose claims and grounds that it deemed worthy of trial. Following SAS, the board institutes either all challenges on all claims or none at all. This introduces the possibility that weak or highly diluted challenges will not be instituted at all to preserve the board’s limited resources. Petitioners need to remember this when formulating their petitions.

For patent owners, success in the PTAB starts years before a patent issue with the careful selection of their patent procurement team. The past cannot be changed, but an investment in solid prosecution counsel at the outset will go a long way in obtaining stronger patents that can survive post-grant challenges, such as inter partes, post-grant and covered business method patent reviews.

The ultimate patent owner ‘win’ is to have patents that are strong enough to deter challengers from petitioning for review. However, even the best patents can be challenged before the PTAB. Patent owners must be objective about the asserted challenges and study the petition from all angles to demonstrate that it does not meet the standard for institution early in the proceedings. The goal is to avoid institution with a strong preliminary response. If that cannot be accomplished, winning on the final written decision is the next best outcome. If a patent owner cannot prevail at trial, the record must be made so that an appeal with the Federal Circuit can provide an additional chance at winning.

Patent owners must work hard to defend against all challenges. Enlisting an expert early in the petition process helps, even if the patent owner does not plan to submit testimonial evidence on a preliminary response. Given the velocity of decisions from the board and courts, patent owners must stay on top of the latest decisions and practices in order to increase their chances of success with the PTAB. When a patent owner wins based on a preliminary response from the PTAB, an appeal is unlikely to result in the reversal of the PTAB’s decision not to institute a trial. If a patent owner wins a trial, appeals are commonly sought by petitioners in higher-stakes cases, so patent owners cannot rest until a decision is final and non-appealable.

Is statutory reform of the US patent eligibility law necessary?

The current state of patent eligibility law is putting the United States at a distinct disadvantage because other countries enforce patents that the US courts do not. Judges and litigants have a difficult time with patent eligibility determinations using the standards articulated by the courts. The USPTO has made changes to address patent eligibility and made it possible to obtain patents more easily than it was five years ago. However, issued patents are not going to be more valuable if the courts will not enforce them. It is likely that Congress will have to step in to provide further guidance on how to decide patent eligibility.

How would you characterise the current state of play in the US patent transactions market?

US patent transactions continue to be challenging in the present market. Optimists are purchasing portfolios at greatly reduced prices in the belief that the patent enforcement pendulum of the United States will swing back shortly. While comparable prices are down, the market has adjusted somewhat by adopting better and more selective patenting practices geared to survive patent eligibility and prior art challenges. Tech companies have not abandoned patent acquisitions, but they must be more selective to justify purchase prices. The financial tech industry appears to be patenting and acquiring patents at a relatively high rate despite the patent eligibility and post-grant challenges plaguing patent owners. More US patent strength will be necessary before the market will recover.

If you were to give one piece of advice to someone beginning a career in patent law, what would it be?

The current patent law is a complicated system that is created from a number of past practices. Patents are mixed in the sense that they include both pre and post-AIA filings. Newcomers to patent law must get a firm grasp of the pre and post-AIA laws and practices in order to appreciate the differences and successfully navigate the maze of possible outcomes in practice due to this complexity.

Newcomers must also understand how post-grant proceedings affect patent enforcement today. This may involve a steep learning curve, because these proceedings continue to change every year, which makes it hard to nail down best practices.

Newcomers should find a mentor who will tolerate a million questions. Even skilled practitioners have a friend on whom they can lean for a second or third opinion. Do not be surprised if an answer is uncertain. Every day attorneys come up with new questions about the existing laws. You must be prepared to adapt with the changes.

How do you expect the US patent environment to develop over the next few years?

Technology is being developed outside the United States at increasingly higher rates by highly skilled scientists and engineers in countries that were not serious contenders until today. The US patent system has simultaneously weakened compared with their patent systems, and the courts and Congress have been slow to act to address this. It is not good for the US innovation system that these trends are happening at the same time. The United States needs to reinvigorate its patent laws to be globally competitive and reward its inventors for their contributions of innovative intellectual capital.