ESRP Rebukes Yoga Company for Stretching the Truth About Influencers 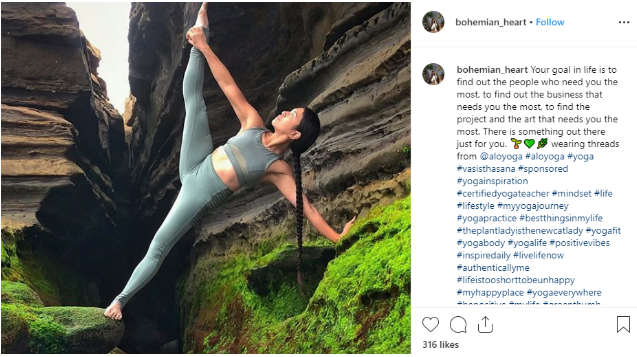 Yogis are causing Instagram envy worldwide—women and men executing advanced yoga poses against backdrops of beautiful rock formations, sunsets, and beaches, all while wearing high-end yoga apparel. Often these enviable posts are the result of spontaneous content creation, but occasionally they are the result of a compensation agreement between the Instagrammer and an advertiser. As the use of influencer advertising has grown on social media there has simultaneously been a push to enforce standards to ensure that consumers are not misled into believing that paid-for content is spontaneous.

Under Section 5 of the Federal Trade Commission Act, the FTC has authority to safeguard truth in advertising. And a core truth-in-advertising principle is that endorsements must be honest and not misleading. So, to protect this principle in the age of online and social media advertising, the FTC created Endorsement Guides. The Guides state that when a material connection exists between an advertiser and an endorser, it must be disclosed clearly and conspicuously to the consumer. Also, they provide that a material connection exists when there is some form of consideration, whether it be monetary or merchandise, provided to the endorser from the advertiser.

Guided by these standards, the Electronic Retailing Self-Regulation Program (“ERSP”), an investigative unit, reviews direct-to-consumer advertisements for deceptiveness. Last year, ERSP opened an inquiry into Alo, LLC (“Alo Yoga”), a yoga apparel and accessory retailer, after an initial review revealed numerous concerning Instagram posts. ERSP identified around 60 personal Instagram accounts, some with over 1.5 million followers, that it surmised had a material connection to Alo Yoga that the accounts failed to disclose. Alo Yoga then confirmed that many of the flagged accounts were provided monetary compensation and/or free merchandise. Additionally, ERSP found that on several occasions Alo Yoga had reposted the non-compliant posts to its own Instagram page.

Based on these findings, ERSP made several recommendations to Alo Yoga that caused it to rework its endorsement advertising policies and procedures. Most importantly, it created “Alo Yoga Ambassador Program Guidelines,” reflecting the standards in the FTC Guides. And it contacted its ambassadors to require them to revise their non-compliant posts to include adequate disclosures and to include proper disclosures in all future posts. Also, Alo Yoga promised to refrain from reposting non-compliant posts in the future. In a subsequent report, however, ERSP concluded that these modifications were not sufficient and provided further recommendations.

In preparing its report, ERSP reviewed the amended ambassador posts to determine whether they met the required clear-and-conspicuous standard. ERSP indicated that including #ad or #sponsored in a post could satisfy that standard—but not if placed inconspicuously. Rather, the disclosure must be prominent and require no searching by the consumer. However, ERSP noted that the majority of disclosures included in the ambassador posts were below the “more” line (meaning that consumers would not see the disclosure when scrolling through Instagram unless they requested to see more) and/or were buried in the middle or end of a long list of hashtags. Therefore, it concluded, the posts’ disclosures were inadequate.

In the end, ERSP recommended that Alo Yoga ambassadors’ current posts be amended to include adequate (clear and conspicuous) disclosures. Also, ERSP reiterated that the FTC Guides put the responsibility on the advertisers, not the endorsers, to ensure that endorsements are compliant. Therefore, Alo Yoga was charged with continually monitoring its ambassadors’ posts and addressing issues with individual ambassadors when it discovers non-compliant posts.