WHAT IS THE SCOPE OF THE ACT?

The Act Supplementing the Constitution Relating to the Prevention and Suppression of Corruption (2018) (Act) regulates the giving of Gifts or Benefits by any person to Officials in Thailand.

The Act defines Gifts or Benefits to include but is not limited to discounts, entertainment, service, meals, or equivalent.

WHAT ARE THE KEY PROVISIONS OF THE ACT?

The Act states that notifications, orders and regulations issued under the Organic Act on Counter Corruption (1999) (“OACC”) remain in force unless they are expressly repealed by subordinate legislation under the Act.

The National Anti-Corruption Commission ("NACC") has been given new investigatory and enforcement powers. The NACC may seek cooperation from foreign counterparts to assist with an investigation.

The Act establishes the NACC Fund. The NACC Fund is intended to cover investigation costs and to fund rewards for whistleblowers.

The Notification issued under the OACC regarding the criteria for Officials to accept gifts and benefits remains in force and provides the following: 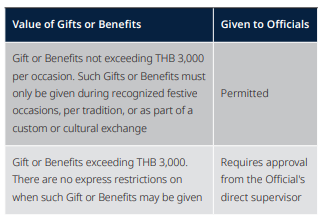 WHAT IS NOT PERMITTED?

Giving a Gift or Benefit, regardless of the value, to an Official to solicit a benefit in kind may be considered an offence of bribery. If found guilty, the offender may be imprisoned for up to 5 years, receive a fine of up to THB 100,000 or both.

The Act defines Associated Person to include representatives, employees, agents, affiliated company or any persons acting for or on behalf of the Thai or foreign entity, regardless of whether such person has the authority to act on behalf of the entity.

A Legal Entity may have an affirmative defence to an allegation of bribery under the Act, if the Legal Entity can prove that it had implemented appropriate internal control measures to prevent the commission of bribery.

The NACC has issued extensive supplementary guidance on the following topics to clarify what would be appropriate internal control measures.

• Strong, visible policy and support from top-level management to fight;

• Risk assessment to effectively identify and evaluate exposure to bribery;

• Enhanced and detailed measures for high-risk and vulnerable areas;

• Communication mechanisms that encourage reporting suspicion of bribery; and

• Periodic review and evaluation of anti-bribery prevention measures and their effectiveness;

The NACC will consider the following factors when investigating allegations of bribery.

• Reason for the Gift or Benefit;

• Value of the Gift or Benefit; and

• Whether there is any intention to solicit a favour or benefit in return.

The NACC consider the following forms of Gifts or Benefits to be high-risk.

• Hospitality (e.g. hosting a fully funded seminar with invitation extended to Officials); and

Organisations should consider implementing and circulating to its employees a clear and transparent gifting policy. The gifting policy should also require employees to specify the reason for the gift.

To mitigate the risk of inadvertently committing an act of bribery, any invitations and Gifts or Benefits should be addressed to the government body (e.g. department and ministry), not to a specific Official.