In March 2022, as it does every year, the Securities and Exchange Commission’s Division of Examinations (EXAMS) published its Examination Priorities, designed to highlight areas that the Agency views to be worthy of heightened scrutiny. Among these, EXAMS included “Emerging Technologies and Crypto-Assets,” noting that the SEC had observed “a proliferation of the offer, sale, and trading of crypto-assets.”[1]

Among the SEC’s recent enforcement actions in the cryptocurrency space is a civil suit targeting an alleged pyramid and Ponzi scheme run through the internet domain Forsage.io. The case will be of interest to industry watchers as a test of the SEC’s long-held position that the sale and promotion of cryptocurrencies and related assets are subject to securities laws.[2] Recently, SEC Chair Gary Gensler in comments before the Practicing Law Institute reiterated that most cryptocurrencies qualify as securities and that existing SEC rules provide sufficient guidance for the cryptocurrency industry.[3]

Forsage was set up to appear similar to a traditional multi-level marketing operation (MLM) where individuals are recruited to purchase and re-sell goods from existing sellers. In an MLM, a participant can earn money by increasing their own first-hand sales and also by recruiting their own sellers, known as a “down line.” The MLM model is generally legal in the United States when the primary source of revenue is the actual sales of goods. However, when recruiting down line sellers becomes the primary revenue generator for participants, an MLM is classified as a pyramid scheme, which is generally not legal.[5]

Forsage’s operations consisted of the sale of “slots” in cryptocurrency smart contracts, which the purchasers were incentivized to re-sell. Smart contracts are a type of computer-executed algorithm that assigns cryptocurrency token to particular owners based on the terms of an agreement. Because the computer code is executed each time a block is added to the blockchain, a smart contract is effectively self-executing – once finalized, it cannot be changed and it will operate on its own without the need to trust a third party.[6]

When a Forsage participant sold a contract slot, that participant created an MLM down line and by the terms of the smart contract was eligible to receive a portion of future slot sales from the down-line transactions in the future: 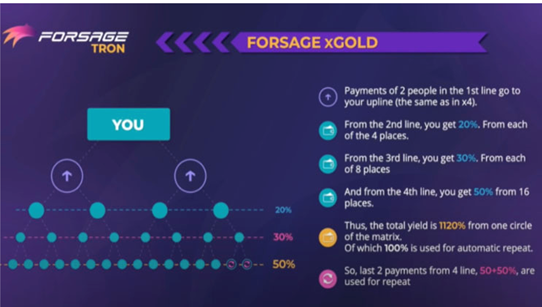 An image from the Forsage xGold marketing materials for use on the Tron platform. The pyramid-style structure is illustrated on the left.

The SEC asserts that “[t]he offer and sale of slots in Forsage’s smart contracts, and the attendant right of investors to earn compensation from sales of those slots … was an offer and sale of securities.”[7] This comports with the SEC’s position on cryptocurrency contracts and Supreme Court precedent, which states that in order to qualify as a sale of a security, the slot sales had to involve four factors: (1) an investment of money; (2) a common enterprise; (3) an expectation of profit; and (4) that the return be derived from the efforts of others.[8]

Because Forsage “did not sell or offer to sell any product to bona fide retail investors – that is, individuals who are consumers of an actual, consumable product and not participants in an income opportunity,” the Forsage operation is alleged to fall under the pyramid scheme prohibition rather than qualifying as a legal MLM.[9]

Further, the SEC asserts that Forsage operated as a Ponzi scheme. A Ponzi scheme involves the promise of investment returns, but the returns paid to early investors are funded out of the investment cash flows from later investors rather than any business operations. Forsage was marketed as an investment vehicle, and because “the proceeds raised through sales of slots derived from investors who recruited additional investors,” that meant that “the payouts under Forsage’s compensation structure were made based solely on investments from the later investors.”[10]

The suit names four Russian nationals, currently thought to reside in Russia, the Republic of Georgia, and Indonesia, who the SEC identifies as the founders of Forsage.[11] However, Forsage targeted an international audience, including recruiting a number of Americans to promote the scheme on social media. These promoters generated a consistent stream of videos on Youtube and media through other channels seeking to gain new members, support the down-line sales of current members, and rebut accusations that Forsage was a pyramid and Ponzi scheme. As a result, in addition to naming the four founders, the SEC’s action charges seven Americans from seven states with violating the registration and anti-fraud provisions of the federal securities laws.[12]

The SEC is seeking disgorgement, civil penalties, and injunctive relief.