On 28 May 2020, the Federal Court handed down the decision in ASIC v Bendigo, which found that certain terms in standard form small business loan contracts were unfair within the meaning of s 12BG(1) of the Australian Securities and Investments Commission Act 2001 (Cth) (Act).

The terms in question in this case related to clauses dealing with indemnification rights, events of default, unilateral variation or termination and conclusive evidence clauses.

In its decision the Federal Court declared the unfair terms void ab initio, rendering the clauses invalid under section 12BF of the Act. The invalidated terms were replaced with new terms as negotiated between ASIC and Bendigo and Adelaide Bank (Bank) and the Bank also provided undertakings to ASIC and to the Court that it would not use or rely on any of the unfair terms.

The decision provides useful guidance to providers of financial products or financial services who may enter into standard form contracts with small businesses or consumers on the types of terms that may be considered unfair by ASIC and the courts.

The unfair contract terms regime under the Act applies to standard form contracts which relate to financial products and financial services. There is a similar regime in the Australian Consumer Law that applies to other types of contracts including small business contracts for the supply of goods or services, or the sale or grant of an interest in land.

Broadly, a term will be deemed unfair under the regime in the Act if the term:

Why were the terms considered unfair in this case?

Set out below is a broad summary of the terms that were found to be unfair by the Court in ASIC v Bendigo and the reasons why the court found those terms to be unfair. 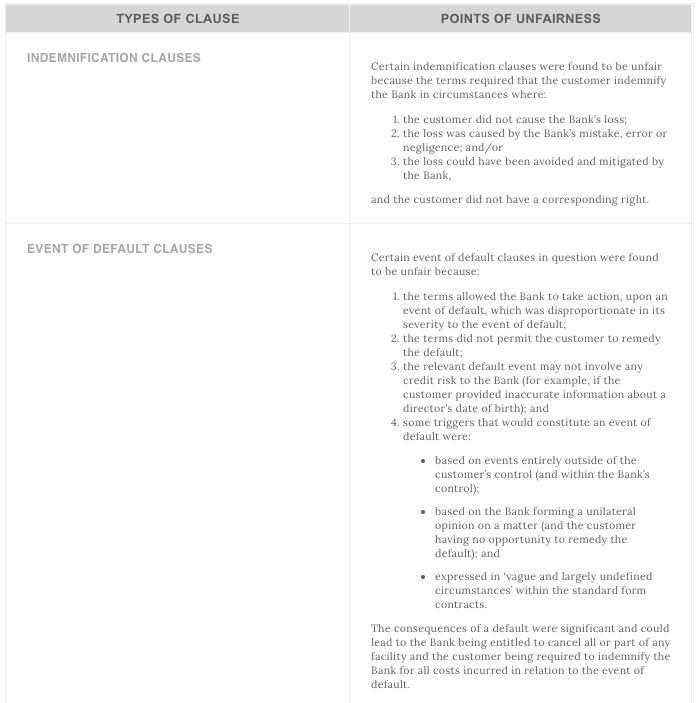 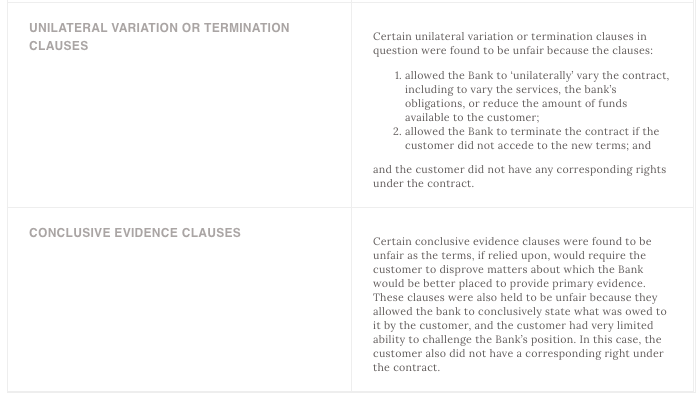 Justice Gleeson also noted the lack of transparency pertaining to the unfair contract terms, in that there were: