Paredes Holding Center (Paredes) filed an EUTM application for the position mark shown below in respect of safety and protective footwear in class 9 and footwear goods in class 25: 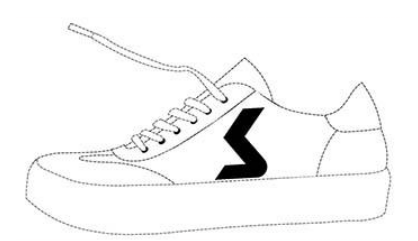 The application was opposed by Vans, Inc (Vans), on the basis of EUTM registrations for the two marks shown below, both of which covered “clothing, footwear, headgear, belts and gloves” in class 25:

Both of the Vans marks were less than five years old and not subject to proof of use. Vans claimed the application was liable to cause confusion with its prior registered rights particularly noting the similarity of the figurative black element in the application with its V design.

The Opposition Division rejected the opposition in entirety finding that although the goods were both identical and similar, there was no similarity between the marks, and as such, a likelihood of confusion claim could not succeed.

Vans filed an appeal arguing its marks had a high level of distinctive character; the marks were visually similar; the differences between the graphical elements of the marks were minor and were much closer if you changed the angle of the elements; and all the goods in question were identical, not just similar. Vans also argued that its marks had acquired distinctive character.

Parades’ argued Vans had not demonstrated acquired enhanced distinctive character for its marks at the time its application was filed. It further argued that the Vans marks contained a stylised letter V whereas its application contained a stylised letter S and the average consumer is aware of the variety of designs used for footwear. Further, it argued that footwear in class 9 is different to footwear in class 25 as there are different trade channels, public and intended purposes, with one being protective footwear and the other being footwear in general or for fashion.

Board of Appeal decision

The Board of Appeal rejected the appeal and upheld the original decision.

Further, the marks use different colours (for example, white and black as opposed to white alone), and the figurative elements comprise different shapes, lengths, directions and positions.

The Board of Appeal further held that the visual comparison of trade marks must focus on marks as they were filed or registered, and not on the basis of potential use or different angles of presentation – unless proof of use is at issue which it was not here. Therefore, Vans’ claim of visual similarity based on changing the angles of the marks had to be disregarded and the marks were deemed to be visually dissimilar.

In view of the lack of aural similarity between the marks, no conceptual similarity could be found either. Therefore, as the marks were not similar, there could not be a finding of confusion.

The Board of Appeal refused to be drawn on the enhanced distinctive character argument of Vans simply confirming the Opposition Division was right not to consider this given its findings the marks were not similar.

This case demonstrates some of the difficulties with position marks such as these. Brand owners may be wise to consider protecting position marks in a variety of positions or angles in order to obtain broader protection and make enforceability easier. It is however clear that a narrow scope of protection is afforded. Would design protection have fared better? Quite possibly…