Last week saw a number of U.S. government actions to combat the importation of goods produced with forced labor. On July 13 the Departments of State, Treasury, Commerce, Homeland Security, Labor, and the USTR issued the Xinjiang Supply Chain Business advisory on forced labor. The advisory addresses companies with operations, supply chains, or laborers from China’s Xinjiang region and states that they “should be aware of the significant reputational, economic, and legal risks of involvement with entities or individuals in or linked to Xinjiang that engage in human rights abuses, including but not limited to forced labor and intrusive surveillance.” The interagency advisory warns businesses that purchasing inputs or goods from Xinjiang “could run a high risk of violating U.S. law.

The advisory includes an “illustrative” list of industries using forced labor in Xinjiang: 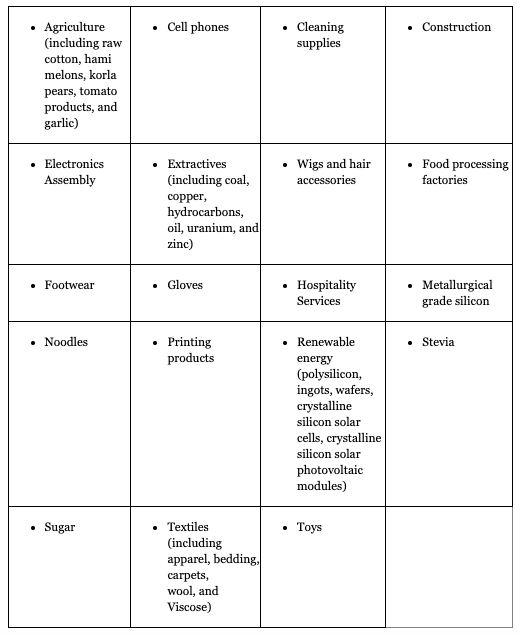 The following day the U.S. Senate unanimously passed the Uyghur Forced Labor Prevention Act (S.65), which bans imports to the United States of merchandise manufactured in the Xinjiang Uyghur Autonomous Region (XUAR) of China. The bill creates a “rebuttable presumption” that goods from the XUAR region are produced with forced labor, unless importers provide evidence to demonstrate otherwise. The bill also requires Treasury, Homeland Security, State and Labor to “develop a strategy for preventing the importation into the United States of goods mined, produced, or manufactured wholly or in part with forced labor in the People’s Republic of China.”

The language “in wholly or in part” mirrors 19 USC §1307, which grants U.S. Customs and Border Protection (“Customs”) authority to bar not only finished goods made with forced labor, but also “goods…in part.” Accordingly, U.S. importers need to be aware that enforcement covers inputs as well. The House has also passed similar legislation with bipartisan support; however, the standard is “clear and convincing evidence” that forced labor was not used in the production of the imported goods. While it appears Congress will enact legislation in 2021, the exact text of the legislation and its precise requirements are unclear at this time, as the House and Senate need to reconcile the differing language in their respective bills into a final bill.

In the meantime, Customs has already significantly increased enforcement of the import prohibition on goods made from forced labor, including issuing withhold release orders (WROs) on the importation of specific products. In 2020 Customs issued 13 WROs, which are promulgated when Customs has reason to believe that the imported products are made with forced labor. So far in 2021 Customs has issued four WROs, including in June for silica-based products made by Hoshine Silicon Industry Co., Ltd., a company located in Xinjiang. This WRO, which is specific to Hoshine, portends that a region-wide WRO on silicon-based products may be coming as well.

The multi-agency advisory, pending congressional legislation, and Customs’ vigorous use of WROs should put importers on notice that new measures may be imposed on additional goods and that merchandise may be detained. Importers must review supply chains and global operations. To protect their brands, importers should tackle the issue of forced labor, review internal controls and visibility into supply chains, and ensure all suppliers adhere to an effective code of conduct including provisions on forced labor and editing customer agreements to protect against late or missed delivery. Finally, importers should prepare for the contingency that Customs will in fact determine that the importer has not proven the negative – that the goods were not made with forced labor and thus deny the merchandise entry into the United States.