On May 3, 2018, Nike filed a lawsuit against Puma in the U.S. District Court for the District of Massachusetts accusing Puma of infringing seven of its utility patents related to footwear. In an earlier post on this blog, we described some of the Nike shoe patents asserted. Puma challenged Nike’s complaint and moved to dismiss Nike’s claims of alleged infringement as to two of the patents, specifically as to U.S. Patent No. 8,266,749 and No. 9,078,488, arguing that these two patents, which are directed to Nike’s “Flyknit®” technology, do not cover patentable subject matter. 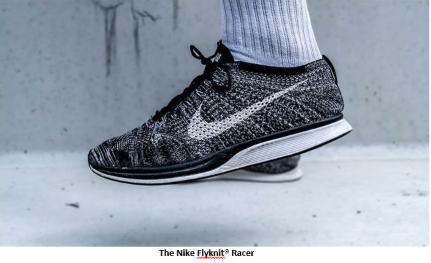 Nike claims that the ’749 patent is directed to a more efficient method for manufacturing a shoe “upper” (literally, the upper portion of a shoe—the part that covers the side and top of the foot). Nike explains that the methods claimed in the ’749 patent are “novel and nonobvious ways to form uppers from a single knitted material while still providing different textures or properties to different areas of the uppers.” Nike expands on this by noting that the invention claimed in the ’749 patent “results in a featherweight, form-fitting, and virtually seamless sock-like upper, scientifically tuned to provided areas of support, flexibility, and breathability where athletes need them most.”

Nike claims that the ’488 patent is directed to “a shoe, a component of a shoe, and a method of manufacturing a component of a shoe.” Nike explains that the ’488 patent has twenty claims that relate generally to “articles of footwear, and, in particular, to articles of footwear incorporating knitted components.” Nike further explains that some claims of the ’488 patent relate to a shoe with an upper that has a lenticular knit structure—for example, one claim states that the “first portion” of the lenticular knit structure “is associated with a first visual effect when the upper is viewed from a second viewing angle that is different than the first viewing angle.”

Typically, the basis for a motion to dismiss under Federal Rule of Civil Procedure 12(b)(6) is that the plaintiff fails to allege facts that would support a reasonable claim for relief. However, a claim can also be dismissed by showing that the defendant will inevitably succeed with an affirmative defense. Here, Puma tried to show that it would inevitably defeat Nike’s complaint by establishing that “the only plausible reading of the [asserted] patent[s] is one that demonstrates that the patent claims cover subject matter that is not eligible for patenting.” Nike, Inc. v. Puma N.A., Inc., 2018 WL 4922353, at *3 (D. Mass. October 10, 2018).

In deciding the motion to dismiss, the court relied on the two-step analytical framework of Alice Corp. Pty. Ltd. v. CLS Bank Int’l. 573 U.S. 208 (2014). In Alice, the U.S. Supreme Court created a test whereby the court must ask (1) whether the patent claims are directed to one of four categories of patentable subject matter or are abstract ideas; and (2) if the patent claims are directed to an abstract idea, whether the claims include an “inventive concept” that ensures the patent adds significantly to current practice. Section 101 of the Federal patent statute lays out the basic categories for patent eligibility—processes, machines, manufactures, or compositions of matter assessed in step 1 of the Alice test. 35 U.S.C. § 101.

In its analysis, the court found that as to step 1, both Nike patents are directed to patent eligible subject matter—tangible manufactured items (footwear), physical components thereof, or the processes for manufacturing. Additionally, the court found that even if the patents were abstract ideas that did not satisfy step 1; the patents nonetheless contain “inventive concepts” that improve upon current practice by increasing the efficiency of the process of shoe knitting and reducing waste. Thus, the court held that Puma had failed to offer clear and convincing evidence to overcome the presumption of patent eligibility, and the court denied Puma’s motion to dismiss. Nike can continue to pursue enforcement of its shoe patents against Puma.

While utility patents are typically thought of in the realm of high tech or hard science fields, they can be a useful tool for protecting clothing and accessories. As shown by this case and discussed in a prior blog post, utility patents may offer protection for innovative elements of articles of clothing or innovative processes for constructing those articles.