Is the advertising agency legally responsible if the campaign is a complete flop?

When an advertising agency pitches for work, it demonstrates how it will increase sales by sending carefully crafted messages to the target audience.

But what if sales do not increase? Is the agency legally responsible? Can the client refuse to pay the agency’s fees?

In the recent NSW Supreme Court decision of Ikon Communications Pty Ltd v Advangen International Pty Ltd [2018] NSWSC 1650 (2 November 2018), Justice Ball decided that the client (Advangen) (owned by Cellmid Limited) was liable to pay the agency (Ikon) (owned by WPP AUNZ) the full amount outstanding of fees for service of $939,055.65 under the Services Agreement, together with interest, even though the advertising campaign was a failure.

In his judgment, Justice Ball dismissed Advangen’s defence and cross claim for damages that Ikon bear responsibility because of the ‘due skill and care’ promise in the Services Agreement.

Because disputes between advertising agencies and clients rarely go to court, this article contains extracts from the judgement which illustrate the legal analysis that Justice Ball applied to the Services Agreement.

Advangen manufactures and distributes in Australia a product for the treatment of hair loss for men and women under the brand name “évolis”. Its brief was:

We would like to see the creative have an underlying emotional pull and the science to be treated as secondary to the key message. The objective is to drive the 12 weeks treatment program.

The main “Creative Presentation” was a “Hers” advertisement (intended as a TVC –Television Commercial).

The script: The camera focuses on a woman standing at the cliff’s edge on a “wild looking coastline during a windstorm … Her beautiful, long thick mane is flying all over the place in the wind”. 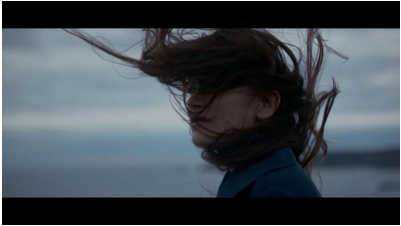 (image from the “Hers” TVC)

Was the pitch misleading?

Ikon’s pitch consisted of an extensive PowerPoint presentation which included the “Creative Presentation”, followed by a proposal which set out an outline scope of work and its fees.

Advangen claimed that statements/representations made by Ikon that the advertising campaign would convert one per cent of the target audience reach or meet a sales target were misleading because the campaign did not achieve that goal.

This part of the cross claim was based on breaches of s 18(1) of the Australian Consumer Law, which applies to pre-contractual conduct. The claims can be answered by proving there were reasonable grounds for making the statements/representations.

Justice Ball rejected Advangen’s claim. He made these comments:

On 13 July, 2015, Advangen signed an advertising contract (the Services Agreement) with Ikon which contained a number of “modules” with a scope of works, timeframes and fees.

Work had already commenced on the TVCs and on a Media Plan.

The TVC claim – Advangen’s expert evidence was that Ikon had failed to prepare a “Creative Brief” (a one page summary), had failed to reassess the TVC after the Therapeutic Goods Advertising Code regulators rejected the monologue, and had failed to appreciate that without the therapeutic message the TVC would be ineffective.

Note: The initial version contained a monologue viz.: “No more being let down by pseudo science serums, No more bogus remedies, No more snake oil cures” which was rejected because it breached sections 4(2) & (5) of the Therapeutic Goods Advertising Code 2015 (Cth) in that no science-based evidence was presented to substantiate the “no more” claims.

Justice Ball rejected Advangen’s claim. He made these comments:

The digital partnerships claim – The paid advertisements, articles, consumer reviews and ratings were commenced 2 days late – on 1 September, not 30 August and so, did not co-ordinate with the first TVCs, as per the Media Plan, and initially did not include the URL to the website.

Justice Ball rejected the claim, saying that according to the Media Plan, the activities on the website would take place over time, and in any event, the delays were minor or outside of Ikon’s control.

The Influencer activity claim – Justice Ball rejected the claim that Ikon failed to comply with the Media Plan by not having the blogs “go live” on 30 August. He said “it must have been contemplated that the activities would occur over a period of time”, and the blogs met the revised timetable.

On 21 October, 2015, Advangen instructed Ikon to cease all advertising activity except for television advertising that had already been booked and work on two blogs. The reason given was that “the sales results were very disappointing”. Advangen did not dispute the amounts in the outstanding invoices, but refused to pay, claiming that Ikon was liable to compensate Advangen because it had breached the Services Agreement as outlined above.

Analysis: The Art and Science of Advertising

An advertising agency fulfils the ‘science’ by making predictions based on reasonable grounds and by carrying out the advertising campaign according to its promises set out in the Media Plan and the Services Agreement.

An advertising agency fulfils the ‘art’ by having the creative work signed off by the client. It is not responsible for achieving sales targets. The success or failure of an advertising campaign is at the client’s risk, and the client must pay the agency’s fee regardless.

As retailer John Wanamaker famously said:  “Half the money I spend on advertising is wasted; the trouble is I don't know which half.”