The Supreme Court recently held oral argument in Oil States Energy Services, LLC v. Greene’s Energy Group, LLC. Before what appears to be a divided Court, the parties addressed pointed questioning over whether the inter partes review (“IPR”) process is constitutional. The justices’ questions and comments touched on a wide-range of issues including patentee expectations, the evidentiary standards in PTAB proceedings, panel stacking, the adjudication process and public v. private rights. This article will examine a couple of the major issues that were discussed in an effort to determine where certain justices may be leaning.

Based on comments made during oral argument, the chart below summarizes our views on the spectrum of where the justices may be leaning with respect to constitutionality. 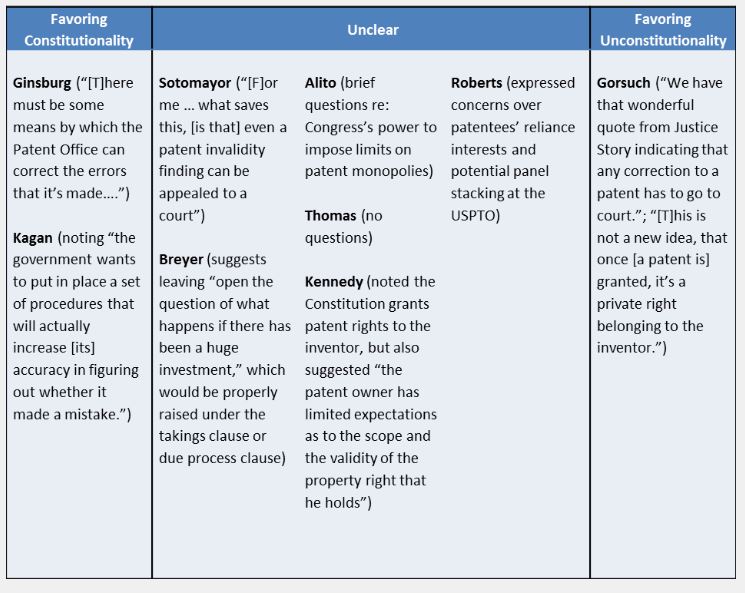 Whether IPRs Are “Adjudications” or “Executive Branch Actions”

Oil States focused its criticisms of IPR proceedings on the fact that they are trial-like “adjudications” deciding a cause of action between two private parties. Oil States conceded that historical ex parte and inter partes reexaminations were constitutional, but distinguished those proceedings by arguing that they were examinational in nature rather than adjudications. Oil States also distinguished IPRs from other administrative agency proceedings before the ITC or NLRB, arguing that its challenge is to adjudicatory proceedings between private parties where the government isn’t prosecuting the action but rather is deciding the action. However, several justices indicated this distinction does not matter – either because “adjudicative” proceedings frequently are handled by executive-branch agencies (Justices Breyer and Kagan), or because patents are private rights that simply cannot be revoked by the executive (Justice Gorsuch).

The Government distinguished prior cases requiring Article III court adjudications of disputes between private parties on the basis that those cases involved findings of liability and damages. The Government noted that in IPRs, the USPTO is not determining whether one claimant is liable to another for a violation of law, but rather is only determining the validity of a patent. IPRs also do not involve an adjudicator awarding a monetary sum to one party or another. The Government conceded that if the USPTO were to decide infringement actions, such proceedings would raise constitutional problems.

Justice Ginsburg, Justice Kagan, and Justice Sotomayor appeared sympathetic to the argument that the USPTO should have the ability to correct its mistakes regarding potentially invalid patents. Justice Ginsburg and Justice Sotomayor appeared to reject Oil States’ distinctions between reexamination procedures and the alleged adjudicatory nature of IPRs, noting that in IPRs the rules allow for the PTAB to continue the proceedings even if the third party and patent owner settled the dispute. Justice Kagan asserted that in any of the mentioned proceedings, the government is trying to determine whether a mistake was made in granting the patent. She suggested that the government wants to have a set of procedures for ensuring accuracy in determining a mistake, which involves listening to third parties that have an interest in the proceeding.

The Patentee’s Reliance Interests & Due Process

Several justices expressed concerns about patentees’ settled expectations and investments made in reliance on the issued patent. Some appeared concerned with the government being able to take away the patent, while others noted that Congress may place conditions on the granting of a patent. Chief Justice Roberts characterized the Government’s position as requiring patentees to “take the bitter with the sweet,” meaning that if a patent owner wants the sweet of having a patent, the patent owner may have to take the bitter—i.e., the chance the government might reevaluate the patent at some subsequent point.

Respondent and the Government argued that IPR procedures do not violate due process. Many justices voiced concerns over “panel stacking,” referring to the USPTO’s decision in a number of cases to use an expanded panel out of concern that the original panel would not implement administration policies. Respondent and the Government noted that such issues could be addressed in an “as-applied” due process challenge in a case where panel stacking occurred (it is not at issue in Oil States’ case). They argued that standard IPR procedures comport with due process. Further, they argued that the patentee does not have an expectation that a patent could not be rescinded by the government because patents have always been granted subject to the possibility of being invalidated later by a court, and since 1981, by the USPTO in some form of post-grant proceeding. The Government argued that Congress did not change any substantive rules by establishing IPRs.

Oil States agreed that Congress has the ability to limit patent rights, specifically with respect to a patent term, but argued that does not mean that a patent owner should have limited expectations as to the scope and validity of its rights.

Justice Kennedy appeared to support the idea that Congress has the ability to limit a patent term and suggested that upon being granted a patent, a patent owner should have limited expectations as to the validity and overall scope of the patent.

By contrast, Justice Gorsuch and Justice Breyer appeared to be unsupportive of the idea that a patentee should expect the possibility of its patent being revoked by the USPTO at a later date. Both justices questioned whether patentees should gain a vested right after enough time passes and the patentee makes significant investments in the technology in reliance on the patent rights.

It is important to note that oral arguments can sometimes be poor predictors of the Court’s final decision. While we do not attempt to predict the outcome of Oil States following oral argument, the questioning does suggest where many justices may be leaning.

Furthermore, while the justices appeared to be divided on the overall issue of constitutionality, each of the justices appears to have some interest as to the scope and overall fairness of the IPR process. Some expressed concern with panel stacking and the ability of administrative judges to curry favor with the executive, while others expressed concern with IPR proceedings being applied to patents that were granted prior to the enactment of the America Invents Act. Such concerns suggest that even if IPR proceedings are held to be constitutional, the Supreme Court may take the opportunity to suggest limitations on the process.

We also note that, on the same day as the oral argument in Oil States, the Supreme Court heard oral argument in SAS Institutes, Inc. v. Matal. The issue presented in SAS was whether 35 U.S.C. § 318(a), which provides that in an IPR the PTAB shall issue a final written decision with respect to patentability, requires the PTAB to issue a final written decision as to every claim the petitioner challenged or whether the PTAB may issue a decision as to only some of the claims. The Supreme Court thought the issue was important to take up and chose not to hold the case pending the outcome in Oil States. This may suggest that the Supreme Court may not find all IPRs unconstitutional, since doing so would moot the issues presented in SAS.