From “big” to “powerful"

Witnessing the great changes to the intellectual property landscape in China

At the end of September 2021, China released “The Outline of Building an Intellectual Property Rights (IPR) Powerhouse (2021-2035)” (“Outline”) . The Outline serves as an important milestone policy through a top-down design at the state level in the intellectual property system, which includes two dates:

Over the past decade, China’s role in the worldwide innovation landscape has been evolved: from a labour intensive heavy-industry producer supplying labour, raw materials, plants and equipment, transitioning to a commercial economy, then transforming to a knowledge-based economy, and even becoming a high-tech country known for "smart" manufacturing and powered by domestically led next-generation technologies such as quantum computing, artificial intelligence and semiconductor chips. As intellectual property practitioners, we believe that intellectual property rights are an effective way to improve one’s bargaining power under international rule. In parallel with these industrial developments, we’ve also witnessed the great changes to the intellectual property landscape in China.

All of the above have been amended to include additional deterrent provisions against infringement, such as punitive damages for intentional infringement, the maximum amount of statutory damages increased to five million RMB (approx. 770,000 USD), and the burden of proof for illegal income related to infringement shifted to infringers, etc.

While innovation is the primary driving force for development, patents are often considered one of the most important indicators of innovative activities. By the end of 2020, mainland China had 2.1 million valid invention patents (excluding Hong Kong SAR, Macao SAR and Taiwan), which means 15.8 invention patents per 10,000 population, exceeding the expected target of 12 per 10,000 as stated in the 13th Five-Year Plan.

Based on the 13th Five-Year Plan, the Outline updates the strategic quantitative target for patents at the national level, i.e., to reach 12 high value invention patents per 10,000 population by 2025. It must be emphasized that the Outline specifies the target to those patents that best represents technology advancement, and only to those of high value.

The number of patent applications filed through the Patent Cooperation Treaty (PCT) of the World Intellectual Property Organization (WIPO) is also one of the most widely used indicators to measure innovative activities. China surpassed US in the number of PCT patent applications in 2019 and maintained an annual growth of 16% in 2020. China is the world's top international patent filing country for the second consecutive year. Simultaneously, domestic filings in China have shown an accelerated growth, as shown respectively in the charts below. 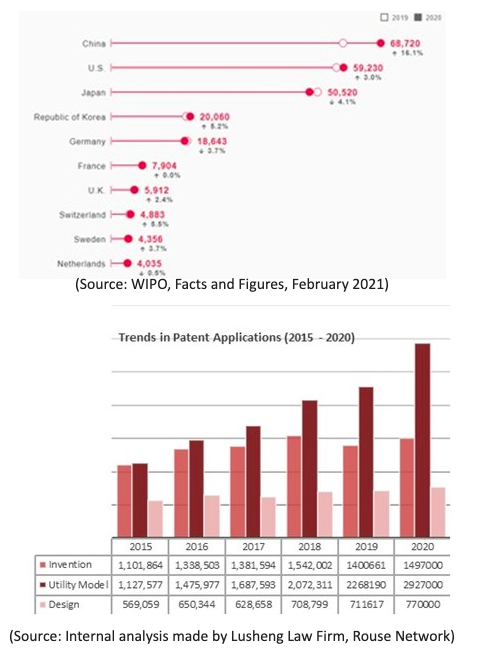 On 20 September 2021, WIPO released “Global Innovation Index (GII) 2021”, in which China ranked 12th (two places up from the year 2020), and it was the first place among middle-income countries and surpassed developed countries such as Japan, Israel and Canada. In terms of innovation output, China's advantages can be found in intangible assets, knowledge creation, and the influence of knowledge. China is in the world leading position in many segmented indexes such as the number of patent and trademark applications by domestic applicants, and proportion of exported creative products in total trade, which indicates that China is gradually transforming from an intellectual property importer to a major creator of intellectual property .

The Outline further points out that promoting high quality development is an inevitable requirement for maintaining sustainable and healthy economic development and makes it clear that China's intellectual property management is changing simply increasing the numbers to improving quality.

The number of intellectual property applications in China has continued to grow rapidly year-on-year under incentive policies such as government funding for patent applications and tax benefits for high tech companies. However, intellectual property filing that deviates from the purpose of protecting innovation, such as irregular patent applications and bad faith trademarks squatting, has become an increasingly serious and unique problem and China has adopted various policies to promote the quality of intellectual property rights. Since 2020, the Chinese government abolished all incentives and subsidies for utility model and design patents to promote and encourage high value innovation and R&D, and to change the international perception of China’s poor patent quality.

At the implementation level, the China National Intellectual Property Administration (CNIPA) has been vigorously combating irregular patent applications. CNIPA issued a series of regulations including:

The Outline stated that a fair and efficient protection mechanism and linkage mechanism where judicial and administrative systems go hand in hand should be established. China has carried out a number of reforms and investigation in administrative and judicial adjudications.

Beijing took the lead in 2019 by proposing and forming a "joint oral hearing" mechanism for examination on patent infringement and patent invalidation. A “Joint oral hearing” meant that the administrative adjudication of a patent infringement case accepted by the Beijing Municipal Intellectual Property Office and the case of patent right invalidation filed with the CNIPA against the same patent in question were jointly heard in the same place and on the same day, in order to achieve the linkage and consistency between the standards for infringement and invalidation decisions. This improves efficiency and shortens the period for examination, which in turn saves the cost of intellectual property rights holders in safeguarding their rights and interests. In the same year, the Supreme People’s Court also jointly heard civil litigation for patent infringement and administrative litigation for patent invalidation (Supreme People’s Court, April 5, 2021, SPC IP and Civil Tribunal No. 369).

We have collected and analysed patent infringement litigation cases in the last five years and the results show that the success rate of Chinese domestic entities or individuals in three types of patent infringement litigation actions have always been lower than that of foreign companies or individuals. The average amount of infringement damages obtained by Chinese domestic companies or individuals has gradually increased in recent years. According to “China Patent Survey Report (2020)” published by CNIPA, the value of patent infringement damages received by Chinese domestic companies were generally low, with the range of “no damages” and “less than 100,000 RMB” accounting for over 60% of the total, and the range “1 million RMB to 5 million RMB” accounting for 1.9% of the total, while foreign-invested companies generally received higher damages, with 32.7% of the total falls between the range of “1 million RMB to 5 million RMB”. 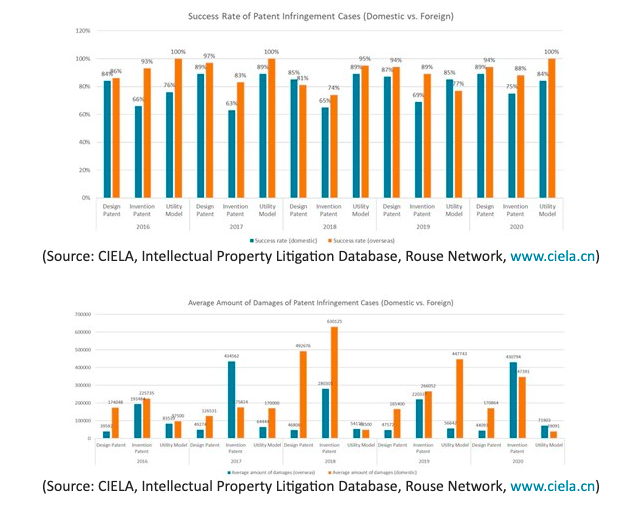 China bought in a total of 300,000 patents in 2020, of which 120,000 are worth more than USD 10,000, accounting for 38% of the total; those worth more than USD 100,000 accounted for 15% of the total; and those worth more than USD 200,000 accounted for 7% of the total. It shows that the higher the value of the patent, the lower the number of purchases, which makes sense as there is a smaller number of high value patents available in the market. The most popular technical area for patent licensing was basic electrical elements, with 682 patents licensed in this technical area in 2020, accounting for approximately 9% of the total number of all licensed patents and ranking first in popularity (according to Guangzhou Intellectual Property Exchange, in their study “2020 Financialization Index Report on China Intellectual Property”). Chinese companies are increasingly aware of the importance of patents. Good patents can not only bring great economic value, but also ensure the appreciation of company asset value, maximizing the economic interests of companies.