On January 22, 2018, the Federal Trade Commission published the revised maximum monetary penalties for civil violations within its jurisdiction. The penalty levels, which were published in the Federal Register, were increased modestly to account for inflation. The new penalties are effective as of January 22, but are not retroactive to previously assessed or enforced penalties the FTC has already collected or is currently collecting.

The increases are being made as part of the FTC’s directive under the Federal Civil Penalties Inflation Adjustment Act Improvements Act of 2015, which requires federal agencies to make annual adjustments to civil penalties within their jurisdiction to account for inflation. Based on the Consumer Price Index for the month of October 2017, not seasonally adjusted, the cost of living adjustment multiplier used for the 2018 increases was 1.02041.

A table summary of the increases to the FTC’s competition and consumer protection laws is below. It is important to remember that for continuing violations, such as violations of the Hart-Scott-Rodino Improvements Act, each day is a separate violation. For example, a failure to report an acquisition in violation of the HSR Act for 30 days would trigger a maximum penalty of $1,244,520 (30 days x $41,484/day = $1,244,520). 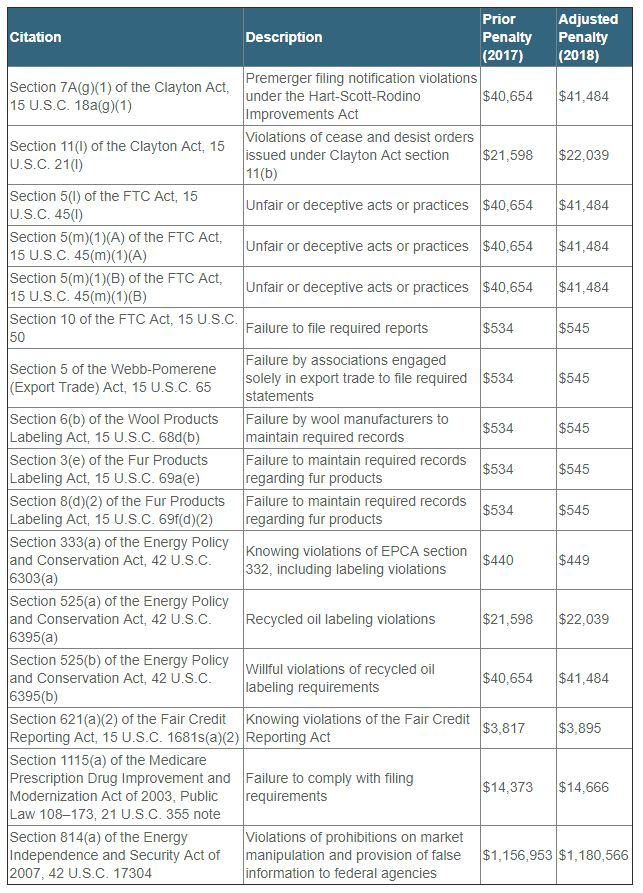