The United Kingdom (UK) formally left the European Union (EU) on January 31, 2020, and entered a transition period that will officially end on December 31, 2020. The UK and EU have agreed that EU nationals who move to the UK before January 1, 2021, will be permitted to remain in the UK. However, they must apply under the EU Settlement Scheme by June 30, 2021, to secure confirmation of their immigration status.

On February 19, 2020, the UK government released a policy statement outlining plans for a new immigration system. If Parliament approves the policy statement’s proposed changes, they will be incorporated into immigration legislation and apply from January 1, 2021. With less than 10 months to go before the proposals take effect, organizations may want to prepare for the changes as costs will likely rise and the sponsorship process may become more onerous for employers.

From January 1, 2021, EU and non-EU citizens will be treated equally as the government moves forward with its stated aim to “take back control of [the UK’s] borders” and introduce a “firm and fair points-based system.” Therefore, EU citizens will become subject to the UK’s points-based immigration system for the first time and will need a visa if they intend to live and work in the UK. Citizens of Ireland will not be subject to the new system, as they enjoy a special status which allows them to freely move and work in the UK.

The proposals announced by the government on February 19 2020, did not introduce a completely new system, as the UK has had a points-based immigration system since 2008. Rather, the proposals’ biggest change is that EU citizens will now be subject to the UK’s immigration rules.

Below is a summary of the key changes that employers may want to be aware of to help them prepare.

Some points will now be tradeable if the salary is below the minimum threshold of £25,600 (but not below £20,480), but the job is in a shortage occupation as designated by the Migration Advisory Committee (MAC), or the applicant has a Ph.D. in a subject relevant to the job. The table below illustrates the proposed points system: 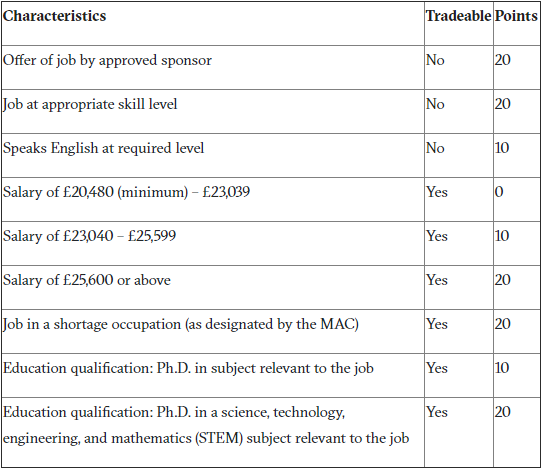 Implications for Employers That Rely on EU Workers

Some of the proposed changes are welcome, namely, the removal of the resident labor market test and the cap on the number of skilled visas issued. Nevertheless, employers will likely now face increased costs if they want to employ non-settled workers.

Whereas previously employers could hire EU citizens at no cost at all, under the new system, employers will need to pay the Immigration Skills Charge when sponsoring work visas for EU citizens. Also, companies that typically cover workers’ visa application fees may face another cost increase. This cost increase potentially represents a huge burden for employers, not only financially, but also in terms of additional administration. The government’s policy statement makes clear that the plan is to “shift the focus of [the UK] economy away from a reliance on cheap labor from Europe and instead concentrate on investment in technology and automation.” “Employers will need to adjust,” the policy statement cautions.

The new immigration system is focused on skilled migrants and there is no proposal to introduce an immigration route for lower-skilled workers. The government has suggested that employers should utilize EU nationals who have applied under the EU Settlement Scheme, estimated to be around 3.2 million, and also the Tier 5 Youth Mobility Scheme and dependents of skilled workers who have the right to work in the UK.

The government has also proposed a capped, unsponsored points-based route for highly skilled workers, in addition to the Global Talent route (which allows highly skilled scientists and researchers to come to the UK without job offers), which was launched in February 2019 and will be extended to EU citizens in January 2021. There is not much detail about this in the policy statement and it will take some time to develop.

The new immigration plans are scheduled to launch in autumn 2020 so that migrants can begin to apply ahead of the system’s taking effect in January 2021.