One of the Labor government’s key election promises was to improve the quality of aged care in Australia.

In this insight, we set out the key features of the Aged Care Bill and discuss what the changes mean for aged care providers and other stakeholders in the aged care industry.

In the table below, we summarise the substantive changes which the Bill introduces, which are discussed in further detail below. 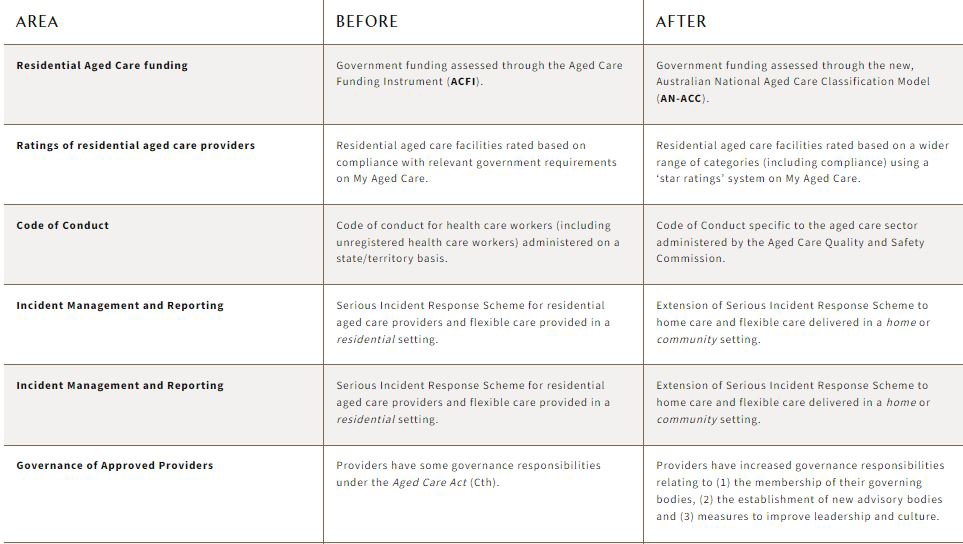 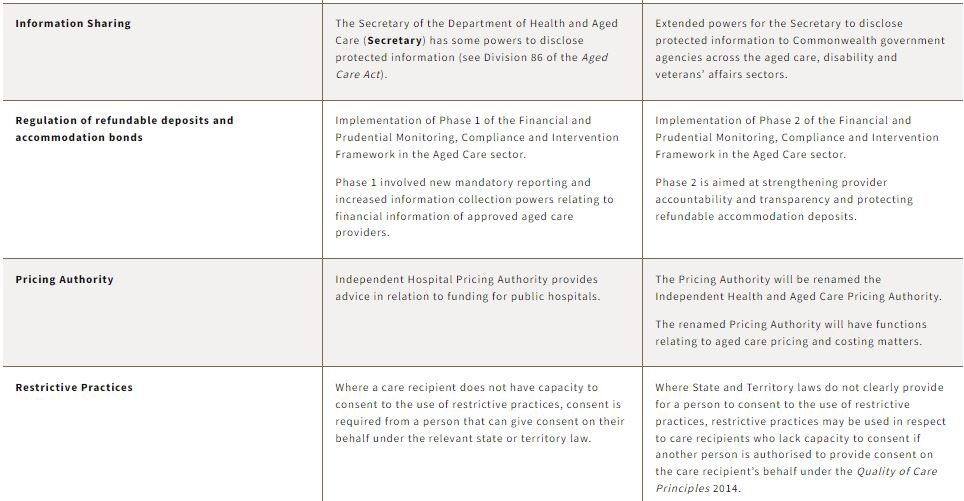 Changes in the Aged Care Industry

The Aged Care Bill introduces a new funding model for assessing the subsidies residential care providers (Providers) can claim for each resident in their care. Presently, providers conduct their own assessments using the Aged Care Funding Instrument (ACFI), where funding is provided at various fixed rates according to each resident’s categorisation across the domains of activities of daily living, behaviour and complex health care.

From 1 October 2022,[2] the new funding model, known as The Australian National Aged Care Classification Model (AN-ACC), will replace the ACFI, and will assess a resident’s care needs by considering their physical ability, cognitive ability, behaviour and mental health. Under the AN-ACC, funding will be determined by a two-tier payment system:

The major feature of this change is that the new subsidy funding model will standardise assessments (as classifications are done independently of the Provider), while also more effectively accounting for the Provider’s actual costs of caring for its residents. For instance, the fixed amount will be made higher for services with higher fixed operating costs, such as for services delivered in remote locations, or which are specialist in nature. The use of an external assessor is designed prevent the system from being used to the favour of the Providers, while also addressing some of the issues with funding uncertainty under the current ACFI model.

Currently, under the Service Compliance Ratings System, residential aged care facilities are ranked in a way which is seen as failing to meaningfully differentiate between the quality of services. This is because presently services which meet the minimum standards will automatically be given the highest rating.

The Aged Care Bill introduces a Star Ratings system (Star Ratings), which will allow consumers and their families to more effectively compare the quality and safety of residential care services and Providers. The Star Ratings is designed to improve transparency and better regulate the standard of service of Providers. The performances of approved residential aged care providers will be compared against a wider range of categories relating to the responsibilities and standards under the Aged Care Act.

The Star Ratings will be published by the Secretary on My Aged Care, the Government-funded website aimed to help people navigate the aged care system, and will consist of an overall rating as well as ratings against four sub-categories:

A key feature of the Star Ratings is that it introduces compliance as one of the core categories used to rate Providers, and is more comprehensive than the existing ratings system, using a wider range of service quality indicators. To reinforce the integrity of the Star Ratings, the Bill also provides that the Secretary is not liable to civil proceedings for loss, damage or injury suffered by a Provider as a result of the Star Ratings’ publication.

Health Care Workers are currently broadly regulated by s by the National Code of Conduct for Health Care Workers (Existing Code). The issue with the Existing Code is that its coverage is fragmentated. The Existing Code is implemented and enforced at the State and Territory level, where is ambiguity around whether aged care workers are covered by it. The present answer to this is contingent on factors such as the State in which the aged care worker is employed, their particular work setting, and the type of service they provide.

The Aged Care Bill introduces a National Code of Conduct (New Code) specific to the aged care sector, which will apply to Providers, and their aged care workers and governing persons. The feature of the New Code is that it will provide for wider regulation, and will address the regulatory ambiguity which has hindered its effective regulation of workers in the aged care sector.

Practically, the Commissioner of the Aged Care Quality and Safety Commission (Commissioner) will oversee compliance with the New Code and will have associated monitoring, investigation and enforcement powers . This includes the power to impose banning orders on aged care workers and governing persons of approved providers. Breaching a banning order may attract civil penalties.

The Serious Incident Response Scheme (SIRS) commenced in April 2021 and is an initiative which assists in preventing and reducing incidents of abuse and neglect in Government subsidised residential aged care services. The application of SIRS was originally limited to approved residential aged care providers and flexible care delivered in a residential setting. From 1 December 2022, the Aged Care Bill will extend the application of SIRS from residential care to both home care and flexible care delivered in a home or community setting.. The SIRS extends the protections by mandatorily requiring Providers to report certain incidents of abuse and neglect to the Commissioner. It also requires Providers to establish effective incident management systems to manage and prevent incidents. The existing SIRS protections against retribution or vilification for reporting such incidents will also be extended.

The governance responsibilities relate to (1) the membership of their governing bodies, (2) the establishment of new advisory bodies and (3) measures to improve leadership and culture. They include requirements to notify the Commissioner of changes to key personnel and a suitability test for key personnel. The Aged Care Bill also introduces obligations for Providers to report to the Secretary on matters relating to their operations on an annual basis.

From July 2021, the Government began implementing a three phased plan to implement a Financial and Prudential Monitoring, Compliance and Intervention Framework in the Aged Care sector (Framework). Phase 1 (which was implemented in July 2021) involved new mandatory reporting and increased information collection powers relating to the financial information of Providers.

The Aged Care Bill introduces reforms to implement Phase 2 of the Framework. Phase 2 is aimed at strengthening Provider accountability and transparency and protecting refundable accommodation deposits. Under the reforms, the Secretary or Commissioner will have the power to request information or documents from a Provider or borrower regarding loans made using a refundable deposit or accommodation bond.

The renamed Pricing Authority will have the following functions in relation to aged care:

A ‘restrictive practice’ is any action which restricts the rights or freedom of movement of a care recipient. In July 2021, in response to the Royal Commission’s recommendations, the Government introduced a requirement that prior to the use of restrictive practices on a care recipient, consent must be sought. If the care recipient lacks the capacity to consent, consent must be alternatively sought from a person who can give consent under the relevant State or Territory law. The issue is that unexpected outcomes emerged from the complex interaction between State and Territory guardianship and consent laws: in many jurisdictions, the relevant laws authorising a person to consent on another’s behalf either do not allow or may even prevent individuals from being recognised as a restrictive practices substitute decision-maker under the Aged Care Act. [3]

As mentioned above, the Aged Care Bill is part of an ongoing program of reform, with more to follow. We will provide you updates on further steps as they come before Parliament.