Court's Opinion on Patent Claim Construction in a Recent Litigation

Claim interpretation is the first and the most important step of determination on whether a patent is invalid or whether an infringement is constituted. Recently in JMC Electronics Co., Ltd. v Chipbond Technology Corporation, the patentee tried to, without amending the claim, interpret the claim with the technical features only disclosed in part of drawings, which was not accepted by the Taiwan court. The court reiterated that the basic principle of interpretation of claims shall be mainly based on the text of claims and shall not incorporate the content only disclosed in specification or drawings, or even only disclosed in some embodiments, but not described in claims.

JMC Electronics Co., Ltd. filed an invalidation action against the Taiwan invention patent No. I397963 “PRINTED WIRING BOARD, ITS PREPARATION AND CIRCUIT DEVICE” (“the ‘963 patent”) owned by Chipbond Technology Corporation (the patentee, the plaintiff). Taiwan IPO invalidated and revoked claims 3-8 of the ‘963 patent after examination. The patentee was dissatisfied with the decision, and filed an administrative litigation. In the end, the Taiwan Intellectual Property and Commercial Court dismissed this case and sustained the decision made by Taiwan IPO1 .

Main technical features of the ‘963 patent and Exhibits

The ‘963 patent provides a printed wiring board which rarely suffers occurrence of short-circuit attributable to migration, wherein the technical features of the claim 3 of the ‘963 patent include:

A: A printed wiring board

E: wherein at least part of the surface of the top end portion of the base metal layer protruding out in the direction of width of the wiring pattern is passivated. In addition, the following is Fig.6 of the ‘963 patent: 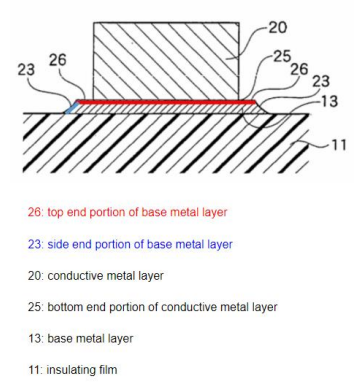 2. The technical features disclosed by the exhibits:

However, with respect to the technical feature D of the claim 3 of the ‘963 patent, it is described in the paragraph [0025] of the specification of Exhibit 5 that “in Fig.1, first, a wiring pattern (Fig.1 (a)) comprising copper circuit 8 is formed by etching a copper foil 3 on the polyimide resin film 1 with a spattered nickel layer 2 between them. When etching the copper, because the copper is etched, part of the spattered nickel layer 2 under the copper circuit 8 remains at the side surface of the wire 8a, serving as protruding portion 2a.”

Accordingly, the main issue of this case is that whether Exhibit 5 has disclosed the technical feature D, the “protruding”, in the claim 3 of the ‘963 patent.

Argument of the plaintiff

The plaintiff argued that the “protruding” in the claim 3 of the ‘963 patent should be interpreted as “combined structure of the ‘side end portion of base metal layer’ and the ‘top end portion of base metal layer’ protruding out in the direction of width of the conductive metal layer”, which is a specific protruding combined structure (platform structure), while the “protruding” described in Exhibit 5 is “metal residues without specific structure” after etching. They should not be confused with each other.

The opinion of the Intellectual Property and Commercial Court

In summary, the claim 3 of the ‘963 patent can be easily made by a person ordinarily skilled in the art based on the combination of Exhibit 5 and Exhibit 4 and therefore lacks of inventive step.

According to the regulations in Taiwan, the extent of the protection conferred by an invention patent shall be determined by the claims, and the description and drawings may be considered as a reference when interpreting the claims. The content of claims cannot be interpreted as the specific embodiments or examples presented in the specification and the drawings merely. Embodiments or examples are only better ways or specific examples to realize the invention as the applicants believe. Accordingly, when the applicants do not further narrow down the scope of claims with specific features disclosed in specification or drawings and the text of claims is clear enough, features only disclosed in part of drawings and specific examples cannot be directly used to interpret claims.

In this case, the “protruding” structure of base metal layer drawn in Figs 1(g), 2(f), 5, 6 is only part of examples which cannot be directly used to limit the scope of claims. Besides, it cannot be directly or unambiguously deduced by a person ordinarily skilled in the art according to the description about the protruding structure and manufacture methods that the claimed printed wiring board must have the platform structure claimed by the patentee. Therefore, the interpretation for the “protruding structure” in the claim 3 of the patentee was not accepted by the court.

In summary, this case showed the importance of patent drafting again. The text of claims needs to be thought and considered cautiously. If the claim is drafted with too many features, the scope will be too narrow to prevent infringement. However, by contrast, too little limitation on the claims may lead to invalidation of the patent, as in this case, where the patentee failed to limit the interpretation of the claim without filing an amendment.