The puzzle is solved: Rubik’s Cube 3D trademark is invalid

The EU General Court ruled in October that the iconic puzzle Rubik's Cube does not meet the requirements for registration as a 3D trademark. Louise van de Mortel sets out the decision and what it could mean for brands looking to protect shapes as trademarks in the EU.

It is on this last point that the Rubik’s Cube registration has been found to fall short.

Background to the ruling

The Rubik's Cube 3D trademark registration has been much discussed over a long period of time. First, in 2006, an application for annulment of the Rubik's cube was filed on the basis of the technical grounds for exclusion discussed above. The central point of the subsequent procedure was whether the rotating capacity of the cube, i.e. the internal mechanism, should also be taken into account when assessing whether the shape of the cube is necessary in order to obtain a technical result.

In November 2016, the highest European court, the Court of Justice of the EU (CJEU), answered in the affirmative: non-visible elements of a shape should indeed be taken into account when assessing whether the shape is necessary to obtain a technical result. The CJEU then referred the case back for a factual judgment, which was followed in 2017 by the decision of EUIPO’s Board of Appeal.

The Board of Appeal declared the contested mark invalid in respect of the goods for which it had been registered in its decision of 19 June 2017. It identified three essential characteristics to the trademark – the overall cube shape, the black lines and little squares on each face of the cube, and the differences in the colours on the six faces of the cube – and found that each of these was necessary to obtain a technical result from the product. In other words, axially rotating, vertically and horizontally, rows of smaller cubes of different colours, which are part of a larger cube, until the nine squares of each face of that cube show the same colour.

According to the EUIPO, the Rubik’s Cube 3D mark had, therefore, been registered in breach of Article 7(1)(e)(ii) of EU Trade Mark Regulation No 40/94, and it cancelled the registration of the trademark. Rubik’s Brand Ltd appealed the ruling to the EU General Court.

On appeal: A 3D puzzle with two essential characteristics

The EU General Court (hereafter: ‘the Court’) did not agree with EUIPO’s findings on the essential characteristics of the mark at issue. In particular, it did not agree that the differences in colour on the six sides of the cube were an essential characteristic of the Rubik's Cube trademark registration. For example, the registration included a simple visual analysis of the graphic representation of the mark (pictured right)

, on which it was not possible to discern with sufficient precision any difference in colours on the six faces of the cube.

In addition, the registration did not include a description of the colours, nor had the company ever claimed that the colours on each of the sides of the cube played an important role in the context of the trademark registration at issue. As part of the hearing, the parties agreed that the differences in colour on the six faces of the cube did not constitute an essential characteristic of the contested mark. This left two essential characteristics at issue: the overall cube shape, and the black lines and little squares on each face of the cube. 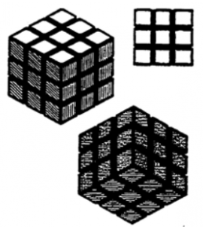 Scoping out the intended ‘technical result’

Next, the Court first confirmed the validity of EUIPO’s definition of the intended ‘technical result’ of the Rubik’s Cube, namely: ‘The sign at issue represents the aspect of the actual goods for which registration was sought, in the present case the ‘three-dimensional puzzle ... known as “Rubik’s Cube”’.

Secondly, the Court observed that it is widely understood that the Rubik’s Cube product is a game whose purpose is to complete a 3D cube-shaped puzzle by rotating axially, vertically and horizontally, rows of smaller cubes of different colours, forming part of a larger cube, until the nine squares of each side of the cube are of the same colour.

The Court further agreed with EUIPO’s analysis that the analysis of the functionality of the essential characteristics of the contested mark should be carried out in the light of the actual goods concerned and the intended technical result of those goods.

The Court, like EUIPO, found that the essential characteristic of the black lines – which intersect, horizontally and vertically, on each of the faces of the cube, dividing each of them into nine small cubes of equal size divided into rows of 3x3 – is necessary to obtain the intended technical result. Those black lines represent a physical separation between the different small cubes, allowing a player to rotate each row of small cubes independently of each other in order to gather the small cubes, in the desired colour scheme, on the cube’s six faces. Such a physical separation is necessary to rotate, vertically and horizontally, the different rows of small cubes by means of a mechanism located in the centre of the cube. Without such a physical separation, the cube would be nothing more than a solid block in which none of the individual elements could move independently of the others.

As regards, the overall cube shape, the Court, like EUIPO, also found that the cube shape is inseparable, on the one hand, from the grid structure, which consists of the black lines, and, on the other, from the function of the actual product at issue, which is to rotate, horizontally and vertically, the rows of small cubes. In the light of those factors, the shape of the product in this instance has to be a cube, that is, a regular hexahedron.

The Court noted that a 3D puzzle with a rotating capability can appear in shapes other than that of a cube; however, considered it to be irrelevant whether or not there are other shapes which could achieve the same technical result.

It is worth noting here that the registration as a trademark of a shape is likely therefore to allow the proprietor of that trademark to prevent other undertakings not only from using the same shape, but also from using similar shapes. A significant number of alternative shapes might therefore become unusable for that proprietor’s competitors.

In Rubik’s Cube case, however, the registration of the 3D mark was found to fall within the scope of the absolute grounds for refusal referred to above and its action to dismiss EUIPO’s cancellation decision was refused by the EU General Court.

3D trademarks can provide considerable valuable to a brand owner, so long as they can be registered within the requirements and restrictions imposed by legislation on the protection of shapes and other characteristics. For additional insight or advice on registering marks such as 3D marks, please speak to your Novagraaf attorney or contact us below.

Louise van de Mortel works in Novagraaf’s Competence Centre. She is based in Amsterdam.