“Nonemployee compensation” generally includes payment of $600 or more in fees, commissions, prizes, and awards for services performed as a nonemployee, and other forms of compensation for services performed for a trade or business by an individual who is not an employee. The deadline for filing Form 1099-NEC for the 2020 tax year with both the IRS and the individual workers is February 1, 2021 (since January 31 is a Sunday). However, the deadline for filing the redesigned Form 1099-MISC is March 1, 2021 (since February 28 is a Sunday).

The Protecting Americans from Tax Hikes Act of 2015 (the PATH Act), enacted on December 15, 2015, accelerated by one month (to January 31) the deadline for filings with the IRS both wages (reportable on Form W-2) and nonemployee compensation (reportable on Form 1099-MISC). Prior to the change, payors were generally required to file Forms W-2 or 1099-MISC reporting nonemployee compensation with the IRS by the end of February of the year after the compensation was paid, if filing by paper, or by March 31, if filing electronically. The due date for furnishing Forms W-2 to employees or payee statements to workers has always been January 31 of the year after the compensation payment year.

The PATH Act change was designed to accelerate the IRS’s receipt of information about wages or nonemployee compensation to enable the IRS to confirm the accuracy of any taxpayer claims for the Earned Income Tax Credit (EITC) or the Additional Child Tax Credit (ACTC). The EITC and the ACTC are refundable tax credits that can reduce a taxpayer’s tax liability below zero, requiring the IRS to issue a refund for the amount by which the credit exceeds the reported tax liability. Prior to the PATH Act change, a taxpayer who received a Form W-2 and/or a Form 1099-MISC by January 31 could claim the EITC or the ACTC and receive a refund before the IRS had either the information or the time needed to confirm the information reported on the taxpayer’s Form 1040 about compensation paid in the prior calendar year. With this change, employees, payees, and the IRS all receive the compensation information statements on January 31, and the IRS has until at least February 15 to confirm the information before issuing any refund to taxpayers claiming the EITC or the ACTC.

One complication of this accelerated deadline, however, was that the filing deadline for other information reportable on Form 1099-MISC was not changed. In some cases, these different filing deadlines required employers to issue multiple Forms 1099-MISC and resulted in a confusing process for both taxpayers and the IRS.

An additional burden was placed on filers when the IRS released Issue 2017-51 of its bulletin for tax professionals in late December 2017, providing that if any Forms 1099-MISC reporting nonemployee compensation were filed after January 31 of the year after the payment year, that “late” filing could subject the form-filer to information reporting penalties even though technically the form was not late. To eliminate this confusion about different filing deadlines, the IRS’s Information Reporting Program Advisory Committee recommended the issuance of a separate form for nonemployee compensation. The IRS therefore resurrected Form 1099-NEC, which had been discontinued in 1982, to solve this problem by ensuring that there are two different filing deadlines for the two different forms.

Other Changes to Form 1099-MISC 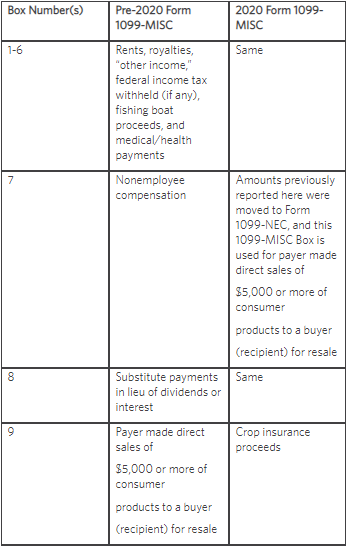 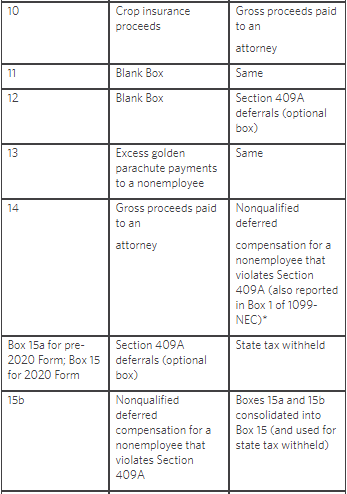