EVFTA and Brexit: The future of trade between the UK and Vietnam

On 23 June 2016 the United Kingdom voted to leave the European Union, and on 29 March 2017 the UK invoked Article 50 of the Treaty on the European Union, officially commencing the withdrawal process ("Brexit").1 Negotiations to determine the terms upon which the UK will exit the EU are ongoing ("Withdrawal Negotiations"). A key aspect of the withdrawal will likely be the UK secession from the EU customs union and accompanying trade agreements entered into by the EU. As a non-member of the European Union the UK will no longer be entitled to enjoy preferential trading terms available in EU free trade agreements.

The European Union - Vietnam Free Trade Agreement (EVFTA) is one such EU trade agreement. The EVFTA was signed by Vietnam and the EU on 30 June 2019 in Hanoi and is expected to enter into force in early 2020 following ratification procedures. After which traders in Vietnam and the European Union will enjoy lower tariff rates, preferential market access for service providers and other beneficial trade provisions.

Trade between UK and Vietnam: What will happen?

It is still possible for trade between the UK and Vietnam to benefit from the EVFTA in the following circumstances: (1) a withdrawal transition period; (2) the UK remaining a member of the EU customs union; or (3) a separate Vietnam - UK free trade agreement based upon the terms of the EVFTA. 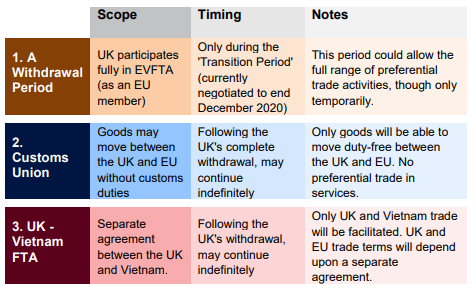 2. The UK as a member of the EU customs union

Similar to the withdrawal transition period, it is possible that the UK and EU will reach an agreement wherein the UK remains a part of the EU customs union, or even establishes their own customs union with the EU. Under a customs union the UK and EU would apply a common external tariff, while removing all internal tariffs. Such a customs union could be recognized in the EVFTA for trade in goods purposes, which would allow UK and Vietnam to traded goods to receive EVFTA tariff treatment. It is unclear at this point how such a union would impact non-tariff barriers, technical barriers to trade, sanitary, phytosanitary standards, and potential barriers to trade, even within a customs union.

3. A separate Vietnam - UK FTA based upon the terms of the EVFTA 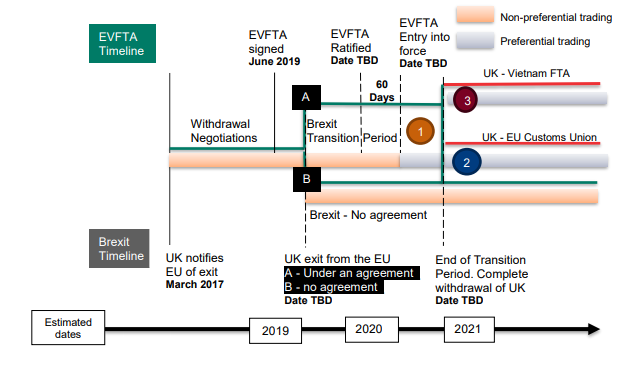 Outside of the above 3 possibilities, trade between Vietnam and the UK would occur under WTO Most Favored Nation (MFN) terms, which are the default trading rules for any two WTO member countries who do not have a preferential agreement. Currently trade between the EU and Vietnam is on MFN terms, until the entry into force of the EVFTA.

Another proposal that has been floated is for the UK to accede to the Comprehensive and Progressive Trans-Pacific Partnership (CPTPP), which took effect 30 December 2018, for the first 6 members to ratify and 14 January 2019 for Vietnam. The CPTPP does not require parties to be Pacific nations, but UK accession would require support of all of the 11 existing CPTPP members.

The UK is currently the EUs second largest economy, trade between the UK and Vietnam in 2018 was valued at nearly USD 6.5 billion.4