Energy from Waste - A load of rubbish or a viable solution to landfill?

Like many developed countries, Australia is faced with the challenge of how to dispose of its household waste. Whilst the separation of garbage into different categories to aid recycling, through the “three bin” system adopted by a number of local councils, has gained some momentum, it is only a drop in the ocean in terms of a solution when considering the volume of rubbish which still finds its way into landfill in Australia.

There is growing interest in Australia in the use of technology to convert waste into energy supported by initiatives and policies at both the federal level and in a number of states and territories. The expectation is that this industry will continue to grow in Australia and that new investment will be attracted into the development of this energy source provided sustainability and environmental concerns can be addressed.

Generally speaking, EfW technology combusts waste at extremely high temperatures to generate steam which is then used to produce electricity – the process can also produce other usable industrial by-products. The process is widely recognised for reducing greenhouse gases by eliminating methane emissions from landfill.

What investment has occurred to date in EfW projects in Australia?

There has been limited investment to date in this industry in Australia and the sector is in its early stages of development.

BY way of snapshot:

In other developments of note, Masdar, the renewable energy company based in the United Arab Emirates, has indicated a strong interest in the Australia market for EfW. Masdar has joined Abu Dhabi-based Tribe Infrastructure Group in initially acquiring a 40% stake in the East Rockingham EfW project near Perth. Masdar and Tribe have also taken a joint one-third stake in an EfW plant to be developed with Suez and Nippon Paper’s Opal at Maryville in Victoria’s Latrobe Valley. Masdar and Tribe have identified a $5 billion pipeline of EfW opportunities in Australia in the next 5 years.

At a Federal level, the impetus for the development of the energy from waste sector is being driven by the Clean Energy Finance Corporation (CEFC) supported by the Australian Renewable Energy Agency (ARENA).

In 2015 CEFC published a market report entitled “Bioenergy and Energy from Waste”. That report identified up to $3.3 billion of potential investment in urban energy from waste – it also noted that generating electricity and heat from waste resources could be cost competitive with other new-build energy generation in terms of capital expenditure but that the technologies were not yet widely deployed in Australia. This was followed in November 2016 by a further CEFC market report entitled “Energy from Waste in Australia: A state by state update”. That report notes that CEFC has provided a cornerstone investment of up to $100 million in 2015 to the Australia Bioenergy Fund (now known as the Australian Recycling Investment Fund). It also notes that CEFC can support developers, waste companies and councils who are seeking finance for EfW projects.

At a state and territory government level:

What are the legal challenges to getting an EfW project off the ground in Australia?

In Australia there are a number of legal challenges which must be overcome in order to get an EfW project off the ground and to secure project financing. Some of the more significant issues are noted below.

All states and territories (other than Tasmania and the Northern Territory) impose either a landfill levy or a waste levy. The rate of levy imposed is not consistent across different jurisdictions although levy settings seem to be moving towards greater parity. The level at which the landfill levy is set will often determine whether energy from waste is a viable economic alternative to landfill. If the landfill (or waste) levy is substantially lower than the cost of an alternative waste solution then there is far less incentive for councils to switch from landfill disposal of waste to an alternative treatment of waste (such as EfW).

The levy in each relevant state and territory for the disposal of commercial waste to landfill is set out below: 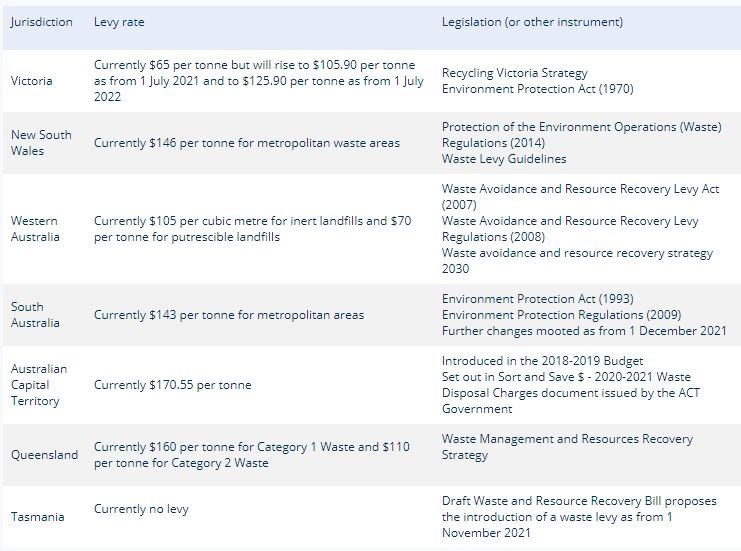 All states and territories have environmental legislation in place which, inter alia, will regulate emission levels from EfW plants or provide the relevant agency with the necessary statutory authority to set such levels. The technology employed by the EfW plant will need to meet the relevant standards in order to gain up front approval from the relevant regulator and emissions levels from the plant are likely to be regularly monitored and tested for compliance.

A planning approval will be required from the local council in the location where the EfW plant is to be located. As noted above, not all councils are necessarily supportive. If planning approval is not forthcoming, it may be necessary to appeal the rejection of planning approval to the relevant administrative tribunal and/or negotiate a compromise with the local council to satisfy its concerns/ requirements. Local residents can often be opposed to the construction of such a plant due to environmental concerns over odour, noise, traffic and emissions. An appropriate communication strategy may be required to allow local residents to express their concerns and have them addressed and to provide “educational” material to the general public.

In order for an EfW plant to be bankable, the technology must be proven. Banks will look at comparative plants overseas and consider their operational record when assessing whether the technology risk is acceptable. Any new technology is likely to have to be at least proven at a demonstration plant before being considered bankable. This seems to be an area where ongoing enhancement of technology is likely to occur and again, banks will want to understand the impact of such enhancements on plant operation and assess whether this gives rise to any increased technology risk.

Again, to be bankable, an EfW plant will need to have access to a continuous and reliable source of household waste. The volume of waste available for processing will be a factor affecting plant size.

The obvious candidates are local councils or even a large city and so signing up one or more local councils and/or cities to supply waste over an agreed period sufficient to support bankability will be critical. The arrangements supporting the Kwinana EfW plant are indicative of what may be required in this regard. Banks will not want such arrangements to be capable of termination without them having appropriate step in and cure rights. Negotiation of such rights through a tripartite deed may present challenges given the level of sophistication of a local council or a city may not be as high as dealing with a government agency.

The EfW plant will need to be connected to the grid so that the energy generated through the incineration process can be transported. This raises a number of complexities including the need to store energy and to transport that energy to the grid. The difficulties faced by some renewable energy plants, particularly solar farms, in certain locations in Australia in connecting to the grid need to be considered and banks will require a level of certainty around grid connection.

To be bankable, the EfW plant may seek to put in place power purchase agreements with customers. If these are put in place, banks will require the usual tripartite deeds to allow them step in and cure rights in a default situation.

As noted above, there is scope to produce fuel from waste and to supply that fuel to industries which are high energy users. Should this capability come to Australia, bankability will require one or more long term offtake contracts with credit-worthy third parties. We may see in the future a partnership between an innovative fuel manufacturer and a waste management company to produce environmentally friendly fuel from waste.