MDR single report exemption and ASRs: Coming to an end for most reporters

FDA has broad authority to grant exemptions from, variances from or alternative forms of MDR reporting. Historically, the Agency has used two separate programs to help simplify certain reporting requirements: (1) an exemption that allows for only one of either the foreign manufacturer or importer to report the same MDR event to FDA on behalf of both entities; and (2) allowing certain events to be aggregated into a single periodic report, known as "Alternative Summary Reporting" (ASR). Per 21 C.F.R. 803.19, a reporting entity wishing to utilize these programs must apply for, and be granted, a request to modify its reporting obligation. In recent years, and consistent with FDA guidance, the Agency has granted a number of these exemptions to reduce reporting of the same event by multiple entities (in the case of MDR single report exemptions); and to reduce the burden of submitting individual event reports for wellunderstood types of events and failure modes (in the case of ASR), while at the same time ensuring that the requirements of the MDR regulations are enforced. With the implementation of FDA's Voluntary Malfunction Summary Reporting Program (discussed below), the Agency is making changes to both the MDR single report exemption and the ASR programs.

In the FDA's November 2016 guidance, Medical Device Reporting for Manufacturers, the Agency explains that, pursuant to 21 CFR 803.19(b) and (c), FDA will review requests for MDR single report exemptions from some or all of the requirements of the MDR regulation. For instance, the 2016 guidance notes that a foreign manufacturer and importer may decide they want the importer to submit reports for adverse events related to products for which both entities have an MDR obligation, and the guidance details the associated exemption request process.

Such exemptions create efficiencies for industry and the Agency. Granting authority for either the manufacturer or importer to report the same MDR to FDA avoids the submission of essentially duplicate reports and limits occasions when completion of an individual form 3500A is required.

We understand from recent FDA actions and discussions with Agency representatives that FDA has sent letters rescinding, or is in the process of rescinding, all MDR single report exemptions and will no longer be granting such exemptions under current policy. We also understand from discussions with FDA representatives that this shift, like the change discussed below to ASRs, is an industry wide policy shift that was not targeted at a specific company, sector or group of companies. This shift follows the implementation of FDA's Voluntary Malfunction Summary Reporting Program last year, which is designed to reduce the burden on entities that are subject to malfunction reporting under the MDR regulations. However, this shift could have significant consequences to both importers and foreign manufacturers that should be carefully addressed by entities that have been operating under an MDR single report exemption.

FDA has, in the past, encouraged the submission of ASR requests and published guidance instructing industry as to what sorts of ASRs would be appropriate and how to make a request for an ASR, (See, Medical Device Reporting Alternative Summary Reporting (ASR) (October 19, 2000)). The November 2016 guidance, Medical Device Reporting for Manufacturers, further referenced the October 2000 guidance as the appropriate source for instruction on requesting an ASR and, as with MDR single report exemptions, the Agency explained that FDA will review requests for alternative reporting forms for some or all of the requirements of the MDR regulation. 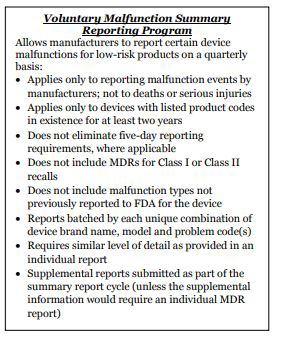 We understand from recent FDA actions and discussions with Agency representatives that some companies have received letters rescinding previously granted ASRs and that certain recent ASR requests have been declined. For malfunction ASRs that are rescinded, we understand that the Agency is encouraging companies to instead make use of the Voluntary Malfunction Summary Reporting Program which became effective August 17, 2018, for eligible manufacturers who wish to participate. It should be noted that there are some limitations for participation in the program (see the Voluntary Malfunction Summary Reporting Program box above for a summary).

The Agency also commented that, though the ASR program will no longer exist by that name, future revised guidance on some form of summary reporting is forthcoming. Further, for the time being, FDA will continue to consider applications for alternative forms of reporting and we understand that some ASR exemptions have not been and may not be revoked as part of this new initiative.

Similar to the revocation of MDR single report exemptions discussed above, rescinding ASRs will likely result in some unintended consequences that should be addressed by entities that have been operating under an ASR that has been or may be rescinded. For instance, companies may require a dramatic increase in resources to prepare and submit individual 3500A forms for each adverse event, and, accordingly, companies may need to modify their processes. Further, as mentioned earlier, the Agency itself will be impacted as it strives to proactively monitor the safety of specific medical devices through a reporting system that may now expand substantially.

A shake up for South Africa trademark law