Head contractors and principals be warned.

The staged roll out of statutory trusts as a key SOP reform has been a clearly signalled initiative of the government for several years. However, I am aware that many participants in the industry had reservations that statutory trusts would be fully implemented in the manner initially envisaged.

As a result of recent developments, statutory trusts are again flagged to take place on a broad scale, but in a different guise to what was originally intended.

Statutory trusts in the original form of project bank accounts were a key reform contained in Building Industry Fairness (Security of Payment) Act 2017 (BIFA) that became law on 10 November 2017.

A word of caution for all industry parties. This is a very complicated Bill, and it is not just me saying so. As stated in the Explanatory Notes:

Part 4 of the Bill amends BIFA. Clause 63 of the Bill represents an entire replacement of part 4, chapter 2 of BIFA. There are in excess of 100 sections under this clause. This signifies a major rework of the operations of statutory trusts for the building and construction industry.

The main purpose of this new chapter is to ensure that funds paid to the contracting party, for example, the head contractor for particular contracts, are held in a trust to protect the interests of subcontractors (hence, the ringfenced money concept).

The statutory trust objectives are:

When is a project trust required?

Subject to the staged implementation schedule outlined elsewhere in this article, a project trust will be required for projects where more than 50% of the contract price is for ‘project trust work’ (a new term, see Section 8A) and the contract is $1M or more.

In the Explanatory Notes it is stated:

As I am not a lawyer, I will not be expressing personal views on this key definition change under the Bill. However, I have noted in a submission made by the HIA to the parliamentary committee reviewing the Bill, the following relevant statement:

“HIA notes that the Panel Report recommended standardising definitions in an effort to simplify the legislation. HIA supports this approach. One advantage of aligning definitions to existing terms is that there is a body of existing case law that clarifies the meaning of certain terms. HIA encourages the adoption of consistent terms wherever possible. While this has occurred in some cases, for example, with the definition of ‘building’ and ‘building contract’ the approach has not been consistent, for example ‘Project trust work’ is a new term, which is meant to align with ‘building work’ under the QBCC Act but does not.”

The Queensland Major Contractors Association in their submission to the parliamentary committee provided an analysis of additional items they maintain is captured by the definition of ‘project trust work’. In their submission they state:

“These items are (l), (m), (n), (o), (q), (u) and (v). For instance item (q) earthmoving and excavating, in relation to a project for the construction of an airport runway and terminal should not include the earthworks associated with the runway. Item (o) – the erection of scaffolding, should only relate to scaffolding associated with the construction of the building. Item (v) the installation of prefabricated components of a building or other works, is ill defined in respect of other works.”

Project trusts and retention trusts will only have limited application.

It is also important to recognise that project trusts will only be applicable for certain types of projects, a fact that I pointed out in a previous article.

In that article, I made mention of the fact that the government established the Building Industry Fairness Reforms Implementation and Evaluation Panel (Panel) to undertake an evaluation of BIFA. In a report to the government it is stated:

“To assess the number of projects and contractors affected by different options for timing of a phased approach, the Panel sought information from QLeave which is set out in Table 4.”

Based on information from Q Leave, it is indicated in the report that of the $43 billion worth of construction work carried out in Queensland each year, only approximately 35% of that work ($15.1 billion) would require a PBA (which is now known as project trust or retention trust).

The values in my opinion piece dated 4 December 2019 hold true, despite the name changes. 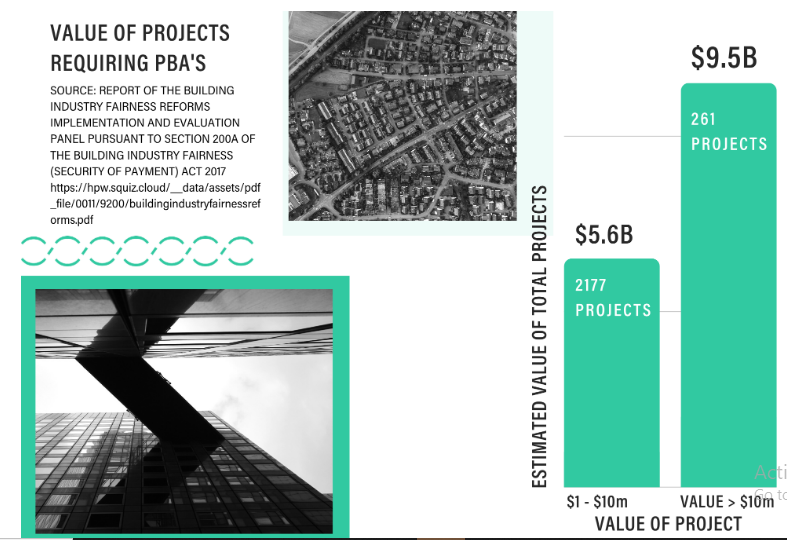 It was also projected that a total of 2,438 projects would require a PBA. 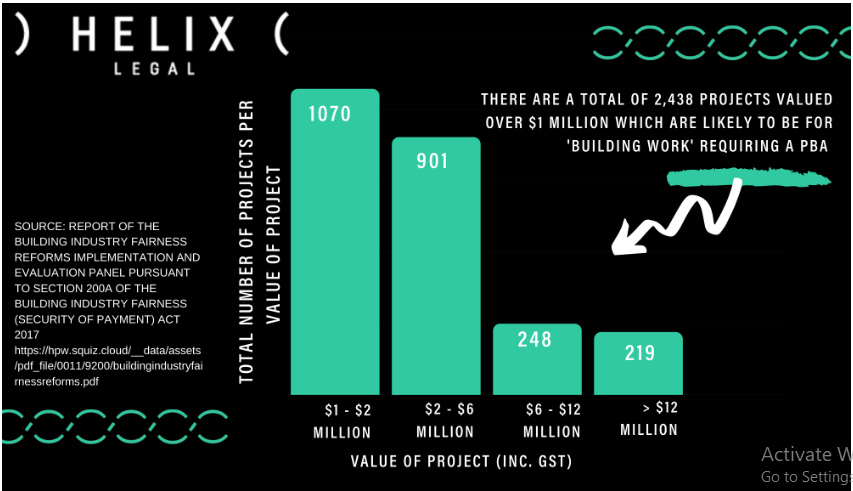 When is a retention trust required?

As stated in the Explanatory Notes:

What are the crucial aspects of the operation of project trusts and retention trusts?

“The next phase of implementation will commence from 1 July 2020. From this date project trusts will be required on all eligible state government construction projects valued at $1 million or more, including health and hospital services projects. From 1 July 2021 project trusts will be extended into the private sector and to local government. From this date eligible building and construction projects valued at $10 million and above will require project trust accounts.

The Explanatory Notes for the Bill states that, concerning penalties:

“The Bill replicates several existing BIF Act offences, including the corresponding penalties. High maximum penalties were applied to the BIF Act when it was first made, and it is appropriate that these be retained. The penalties provide strong deterrence from non-compliance, enable the courts to impose more meaningful penalties, such as imprisonment, where appropriate and emphasise to industry and the community the seriousness of the offences under the legislation. New offences associated with the trust account requirements have been based on existing BIF Act offences as well as other trust legislation, including the Legal Profession Act 2007 and Agents Financial Administration Act 2014. The Bill also creates an offence under the BIF Act where a respondent, for a payment claim, pays less than the amount stated in a payment schedule.” 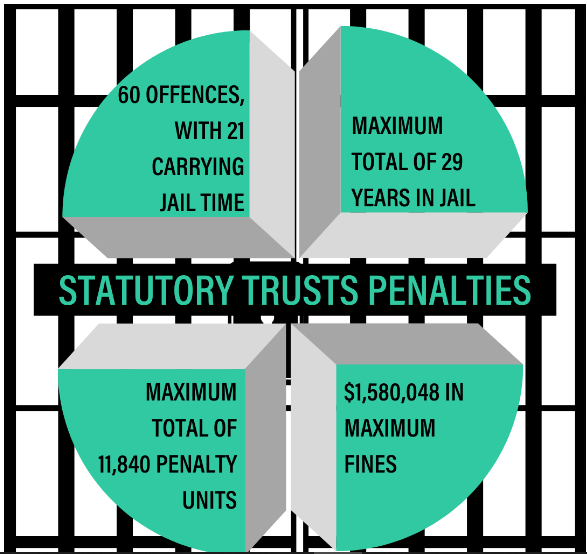 I want to stress that the above infographic represents maximum totals in terms of penalty points, jail time and fines. In the Explanatory Notes it is stated:

“Importantly, the penalties in the BIF Act, as well as the remainder in the Bill, are a maximum only and the courts will retain their discretion to impose lesser penalties depending on the circumstances of the breach and mitigating factors.”

I am of the view that the time has come for head contractors and principals to become informed on the operations of project trusts and retention trusts. While there may be some changes to their operations as a result of current deliberations by parliament, I do not expect them to be anything of a major nature.

The parliamentary committee is due to report on the Bill by 20 March 2020.