Legal and business concerns arising out of the recent outbreak of COVID-19 include the following:

The focus of this article is on the impact of the outbreak of COVID-19 on the performance of contractual obligations. The outbreak has the potential to cause significant impact on commercial contracts, including non-performance, suspension of performance, cost relief, termination, frustration of contract and damages for breach of contract. In this article, we will specifically discuss force majeure clauses and the doctrine of frustration in common law, as well as the applicable civil law provisions. We will then provide key points to be considered by parties to commercial contracts impacted by the outbreak.

Many commercial contracts contain a force majeure clause. These clauses may expressly excuse a party from performance of its contractual obligations (or suspend performance of a party’s obligations) as a result of circumstances specified in the contract. Whether or not the outbreak of COVID-19 constitutes a force majeure under a particular contract will depend on the specific wording of that contract, and on the governing law in the jurisdiction applicable to the contract.

The Doctrine of Frustration

A careful contractual and factual analysis is required to determine whether or not a particular commercial contract has been frustrated by the outbreak of COVID-19. This will depend on the nature of the services to be provided under the contract and the severity of the impact that the outbreak has on a party’s ability to perform its obligations under a contract.

The concept of force majeure in Quebec is codified at art. 1470 of the Civil Code of Quebec, “C.c.Q.”, which reads as follows, with the English version using the term “superior force”:

Un-foreseeability means that the parties could not have, at the time of the conclusion of the contract, foreseen the occurrence of the event. This does not mean that the event cannot have ever occurred previously. The standard is whether a reasonable person in the same situation could have foreseen the event. For example, a tornado may not be a force majeure event in Florida, but could be considered to be one in Montréal.[3]

Irresistibility consists in the impossibility for a reasonable debtor to take reasonable measures to avoid the occurrence. In addition, the case-law and the commentators agree that irresistibility also means that the harm-causing event must render absolutely impossible the performance of the debtor’s obligations. The irresistibility condition is not met when the performance of the debtor’s obligation simply becomes more difficult, perilous or onerous.[4]

Art. 1693 C.c.Q. specifically addresses the impact of a force majeure event on contractual obligations. It reads as follows: 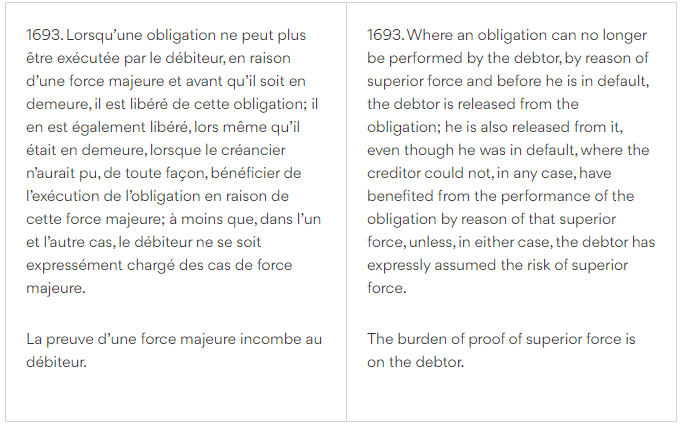 KEY CONSIDERATIONSThus, pursuant to art. 1693 C.c.Q., the debtor may be released from an obligation by the occurrence of a force majeure event and may also be released where the creditor could not have, in any case, benefited from the obligation of the performance due to the event. The burden of proof that the event, in this case, the outbreak of COVID-19, constitutes a force majeure, lies with the debtor.

In the immediate term, it is important for parties to commercial contracts to consider their rights and obligations if they have been or expect to be impacted by the outbreak of COVID-19. Some key factors to be considered include the following:

Does the commercial contract contain:

If the commercial contract contains a force majeure clause:

Has the outbreak of COVID-19:

Parties to commercial contracts that have been impacted by the outbreak should also determine whether or not they have insurance coverage for losses resulting from a party’s inability to perform its contractual obligations due to a supervening event. If so, it is imperative to comply with any notice requirements and timelines under the insurance policy.

Companies are being impacted by the outbreak of COVID-19 in various ways and to varying degrees. It is important for them to analyze the impacts or potential impacts on their businesses, including on their contractual relationships, by reviewing their own specific circumstances and contracts internally or with legal counsel.

To determine whether or not a contracting party may be relieved from performance of its contractual obligations as a result of the outbreak will involve a factual and legal analysis on a case-by-case basis. In anticipation of being impacted by the outbreak, contracting parties should carefully analyze their contractual rights and obligations, review their financing agreements and insurance policies, and consider any disclosure obligations which may arise.

Incoterms 2020 – what are the implications?