Canada released its long-awaited Indo-Pacific Strategy (“IPS”) on November 28, 2022. The new strategy is important for Canadian businesses because the region encompasses 40 economies, over 4 billion people, and $47 trillion in economic activity.[1] The IPS includes trade negotiations with the Association of Southeast Asian Nations (“ASEAN”) states as well as Indonesia and India, and Canada’s application for membership in the Indo-Pacific Economic Framework for Prosperity (“IPEF”).

What is the IPS?

The IPS has five core tenets: (i) peace and security; (ii) trade, investment, and supply chain resilience; (iii) investing in and connecting people; (iv) a sustainable and green future; and (v) strengthening Canada’s role as a reliable and engaged partner to the Indo-Pacific. This bulletin focuses on how Canadian companies can benefit from opportunities to expand exports and investments in the Indo-Pacific, and the reciprocal opportunities for Indo-Pacific trading partners to increase their exports and investments in Canada, particularly in areas where Canada seeks to diversify and improve the resiliency of critical supply chains.

The Canadian Government has committed $2.2 billion in investments over the next five years to support the IPS. This will include significant government support for Canadian businesses pursuing new trade opportunities. For example, Canada will:

The IPS incorporates Canada’s current and planned trade agreements in the region:

While there is significant overlap among the CPTPP and ASEAN member states, a free trade agreement between Canada and ASEAN would liberalize and incentivize Canadian trade and investment with Indonesia, Thailand,[8] the Philippines,[9] and other smaller ASEAN nations that are not CPTPP members. ASEAN member states collectively comprise one of the world’s fastest growing economic regions, and taken together would constitute Canada’s sixth largest trading partner and the world’s third most populous consumer market. Such a trade agreement would also allow Canada to compete on a level playing with Australia and New Zealand — which both already have a free trade agreement with ASEAN — for agricultural and other exports to the region.[10]

Viewed in a broader context, the economic strategy in the IPS is a continuation of Canada’s efforts to diversify its trade and investment flows beyond the major shares held by the US and China. The combination of the CPTPP, CKFTA, Canada’s Comprehensive Economic and Trade Agreement with the EU (“CETA”)[11], and its successful renegotiation of the Canada United States Mexico Agreement (“CUSMA”, formerly the “NAFTA”)[12] make Canada a uniquely attractive location for international companies to invest, operate and conduct trade with Asia, Europe and the Americas. Additional trade agreements with ASEAN, Indonesia and India will amplify these network effects and provide significant incentives for companies in those jurisdictions to trade and invest in Canada.

The IPS also contemplates that Canada will be admitted into the IPEF initiative launched by U.S. President Biden in May 2022. While the IPEF is not a traditional trade agreement (e.g. it does not contain tariff reduction or other market access provisions), it has four pillars which offer a structure for economic cooperation in the Indo-Pacific that are aligned with many of the elements of Canada’s IPS:[13]

Canadian business associations have highlighted the need for Canada to join IPEF to avoid isolation from some of the world’s most important and growing economies.[14] The IPEF member countries — Australia, Brunei, India, Indonesia, Malaysia, New Zealand, Philippines, Singapore, South Korea, Thailand, and Vietnam, along with the United States — represent 60% of world population and 40% of global GDP.[15]

The IPEF allows participating countries to choose at least one or more of the four pillars, resulting in the possibility that engagement by members will be multi-faceted. We expect Canada to actively engage on all four, with the most salient for trade and investment being pillar I on trade-related issues, and pillar II on supply chains:

Canada’s expected admission to the IPEF initiative would further deepen its engagement in the Indo-Pacific arising from the declared priorities outlined above. Areas of major opportunity for Canadian businesses include the digital economy, agriculture, clean technology, and high-tech manufacturing.

Canada’s two-way trade flows[20] covered by the CPTPP, ASEAN and IPEF are substantial; while there is some overlap, each of the networks cover significant unique commercial relationships in the Indo-Pacific region: 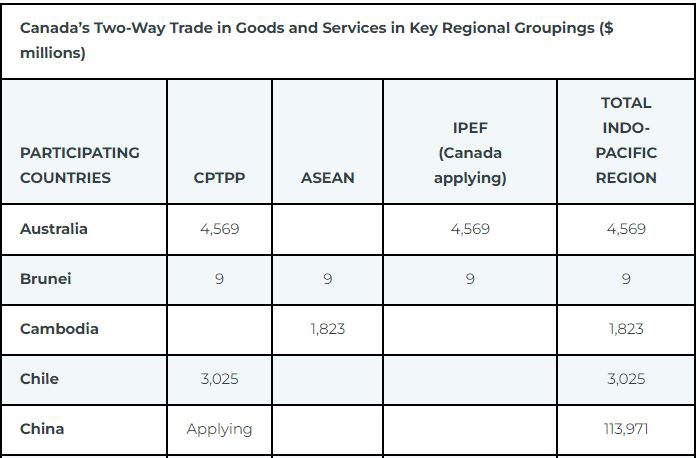 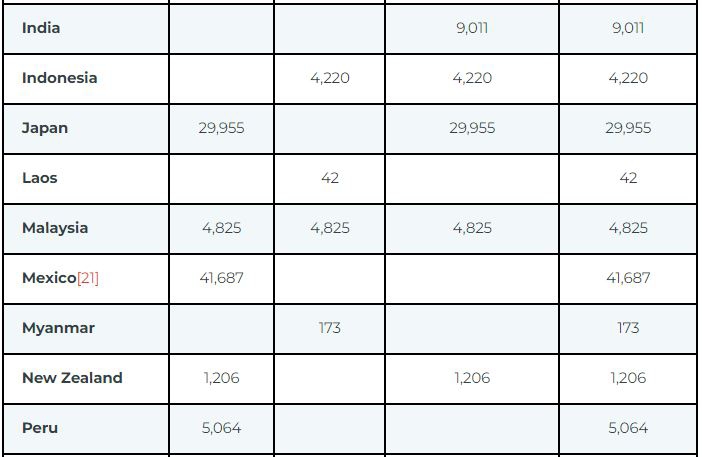 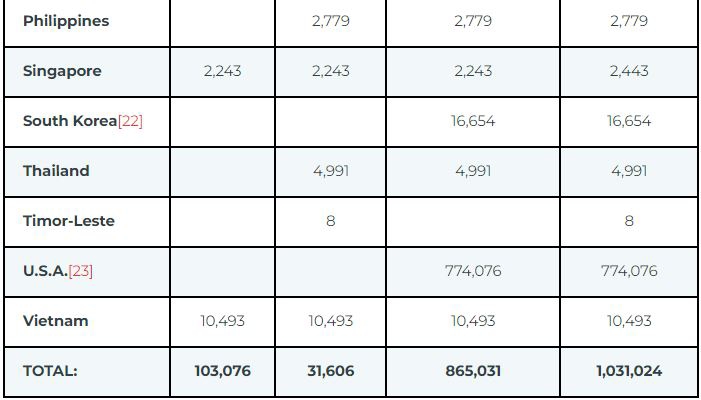 Canadian businesses gain significant upsides from the new IPS. Demand in these markets for Canadian food, energy, minerals, and technology should be particularly significant. The anticipated new free trade agreements with India and ASEAN have the potential to greatly expand access to these large and growing markets. These developments will also create significant opportunities for exporters and investors from the Indo-Pacific region to increase their activities in Canada.